Looking toward the future, SES is providing demos of Ultra HD (UHD) with high dynamic range (HDR) on the exhibit floor and a demonstration of brand-new virtual-reality R&D via satellite in conjunction with Fraunhofer Heinrich Hertz Institute (HHI) Berlin. 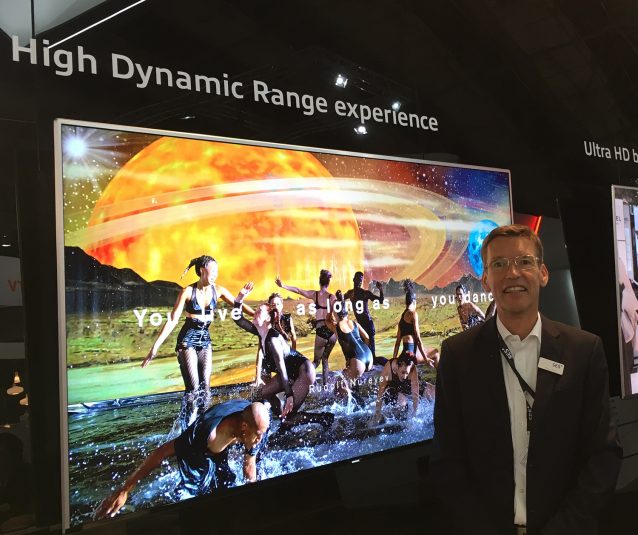 Thomas Wrede at the SES booth at IBC 2016

The first UHD demo offered a test channel with content produced by LG Electronics (launched in May during SES’s annual Industry Days) on a 65-in. LGE OLED flat screen encoded in the Hybrid Log Gamma (HLG) format (BBC and NHK’s backwards-compatible HDR technology). The second demo showcased two sets of UHD content in HDR, produced by Samsung and SES, respectively, and displayed on a 75-in. Samsung Quantum dot SUHD TV using the HLG format. The third demonstration showed the Technicolor/Philips backwards-compatible HDR technology on a 65-in. LGE OLED flat screen via a Technicolor set-top box.

On the VR front, SES teamed with Fraunhofer to showcase transmission of a 10K x 2K panoramic video signal via satellite to multiple devices. The signal was received at the SES stand at IBC 2016 and transmitted to a UHD display and a VR headset. The viewer could choose a viewing angle, zoom in and out, turn the picture on the TV display using a simple remote control; if the user wears the VR headset, the video signal is delivered simultaneously to the TV and the headset. The content — a symphony-orchestra concert — was filmed with Fraunhofer HHI’s OmniCam-360 camera and transmitted via SES’s ASTRA 19.2 degrees East orbital position.

The show also marked the IBC debut of MX1, the merged company resulting from SES’s acquisition of RR Media, which closed in July. The new global media-services company, which is exhibiting in its own stand separate from SES, leverages the capabilities and infrastructure of both companies to offer a full suite of digital video and media services.

SVG sat down with Thomas Wrede, VP, reception systems, during the show to discuss SES’s UHD/HDR demonstrations and the potential of virtual reality.

How is SES exploring the transmission of HDR UHD content, and what challenges do you foresee?

We are looking very closely into high dynamic range. It’s an important topic for the industry, especially for some of our customers, because it will further enhance the consumer experience. It will also defocus the conversation from just being about more pixels and the viewing distance versus the display size. If you are too far away, if your screen is too small, you don’t need Ultra HD resolution necessarily.

The problem with high dynamic range is that, in the production, it has to be specially prepared. You need high-dynamic-range cameras with the respective camera curves and the respective technology. And I think the producers and the creative people also have to learn how to handle it. So there will be a learning curve — just as HD shooting and Ultra HD shooting had and continue to have.

Can you tell me about the UHD HDR demos you have on display at the booth?

At IBC, we have four Ultra HD demos running on two satellite transponders with two 25-MBps transport streams on each transponder. We have a big focus on Hybrid Log Gamma [HLG] with three demos of the BBC and NHK system because we think it’s perfect for live television. Our other HDR demo is with Technicolor Philips [HDR standard]. We have a Technicolor set-top box connected to an LG OLED display, and that’s working well and delivering fantastic high dynamic range.

We have two Hybrid Log Gamma transmissions. One we have here on the 75-in. UHD screen Samsung -provided and SES content done in one clip, which was encoded by ATEME in France. And then we have another HLG transmission on transponder 49 over 19.2 East, where we have very nice high-dynamic-range content from LG.

Why are you in favor of HLG as the HDR standard movie format?

It’s backwards-compatible, it’s easy to implement, and there’s no metadata headache. You just need to implement the Hybrid Log Gamma curve to the television set. At the end of the day, you will need some signaling from a set-top box to a display via HDMI that lets the displays know it’s received Hybrid Log Gamma, but we don’t see that as an issue. And I can tell you that it works very well with the displays, in particular if you stay in the same BT2020 color space. That is no issue for us, because we also strongly believe in having UHD with 10-bit-color-depth encoding. And all the HEVC 10-bit devices out there are BT2020 devices. We test it with a lot of displays in our office, and the backwards-compatibility really works well.

For live sports, I think the HLG decision for me is a very obvious one. However, we do have some customers that are vertically integrated players and can handle the metadata challenges. … That’s when we started talking about Dolby Vision, the Technicolor Philips [HDR standard], HDR10, and other solutions. There are good reasons for these technologies to be in our industry, but there are definitely technical challenges — as there are with HLG — and I’m not sure they create a far better experience for the average consumer than HLG.

Where are we in the maturation timeline of HDR, and how do you see the HDR standard playing out?

We have 26 Ultra HD transport streams on our satellite out of about 60 on satellite worldwide as of early September 2016. None of these transmissions, except our IBC demos and the Eutelsat demo launched a few days ago, has HDR at this point in time. So it is still early days. I think the biggest worry of our customers is to find the business model for the Ultra HD effort. As they ask their production to get more pixels into their product, some of the pictures in standard dynamic range still have a big difference in terms of quality [versus HDR]. So I think there is still some headroom to get better and that more pixels is not enough to commercialize Ultra HD and show consumers that it’s worth investing in.

There’s a lot of HLG drive, particularly for live sports and other live content. However, I speak to CTOs of my customers; none of them will rule out anything, especially considering there may be a second, more-sophisticated-metadata high-dynamic-range system in the future. I think there is a long way to go.

What does the VR demo here at the booth entail?
Our intention [with this demo] was to show that SES is in the VR business. I can’t tell you if this will be a big thing in two years or if it will go the way of 3D. I don’t know. But we want to be innovative and show that we are looking at these things. We’ve worked with Fraunhofer to create a really great experience here that I’m very excited about.

With a 10K x 2K view, you can zoom as a consumer anywhere you want on the screen. Now imagine this for live sports. Wouldn’t it be cool to find your own viewing angle and have it be fully immersive? Yes, there needs to be some improvements in the technology, but we’re very excited about the prospect of [VR].