In April, Eutelsat named transmission-industry veteran Mike Antonovich CEO of Eutelsat Americas. Since then, he has leveraged his extensive experience in the satellite sector to build out Eutelsat’s position in the U.S. and develop a more “video-centric” business. Antonovich, who began his career at ESPN as a broadcast engineer, was a long-time member of the PanAmSat team and headed its global sales prior to its acquisition by Intelsat in 2005. Since then, he has served as CEO of Genesis Networks; SVP for the Americas, ATEME; and SVP, global sales, for Media Links.

At IBC 2017, SVG took the opportunity to catch up with Antonovich regarding his plans for Eutelsat Americas, how he believes his experience in the industry can help the company, his projections for 4K and HDR contribution, Eutelsat’s recent purchase of a minority stake in V-Nova, and the new satellite-delivered contribution platform launched as a result of the deal. 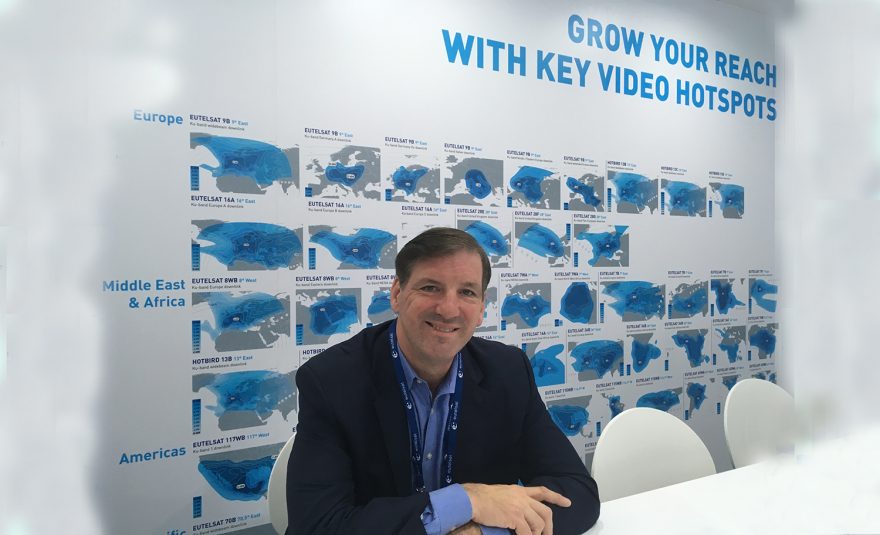 You come from a strong satellite background but have been away from the industry for about a decade. What has changed in that time, and what excites you about being back in this sector?

It’s really an interesting time to be back in the business. I haven’t been very far — just adjacent with a reseller, global fiber-network provider, and then encoding hardware and video-transport technology over fiber, all of it customer-facing — but it’s really great to be back in satellite because I feel at home here. A lot of things have changed in the 10 years: there are a lot of new challenges but many new opportunities as well.

There is definitely more competition, but the video market is still largely defined along the same lines. There is leakage to OTT and IP, but satellite is still very much a long-tail business for distribution. And satellite contribution has some really cool new technologies that we’re working with V-Nova on. The project is very interesting for high-end video transport because it makes [satellite] viable again for high-bandwidth contribution, which is what leaked away to fiber over the past few years. Putting out a better-than-JPEG2000 signal on a satellite transponder puts us right back in the mix for that part of the market.

While Eutelsat has been global leader in video for a long time, they really haven’t had any major focus in the Americas for the past 10 years. In the Americas, it’s been mostly a Latin America-driven data-centric business for satellite. Eutelsat’s global revenues are about 65% video, but, in the Americas, it’s about 20%. However, video is in my DNA, and I’m excited to grow that number and make this a more video-centric company in the Americas.

What other opportunities to do you see for Eutelsat in the Americas?

Obviously, the developments in REMI and [at-home] production is very interesting. I think we have a major opportunity there because we have a very new satellite fleet. And performance really matters if you’re trying to squeeze the last 5 Mb or 8 Mb out of a feed to fit in one more camera on an [at-home production]. It is down to that when customers want to get 80 Mb through on a 36-meg transponder with some of the higher modulation schemes. There’s a lot of interesting things we can do there.

The good news is that I already have established relationships with the people dealing with those [productions] from my experience in the video business. I talk their language, which is extremely relevant in the contribution business. I’m also hiring a great team with a lot of experience in this part of the market.

Do you see demand for 4K and/or HDR contribution and distribution growing in the Americas in the coming year?

We already have a 4K HDR feed up over Europe, and we can absolutely do it in the Americas. There’s a niche for that. But no, it hasn’t been growing, and it’s been a lot slower than I thought. Even HEVC adoption has been pretty slow for distribution services.

We need advances in modulation and in encoding to make 4K take off and have true economic value. When HD launched, it wasn’t much different: it was originally a single carrier for transponder; it got to three, and now a lot of folks are doing four or five per transponder for distribution. We’ve got to get [back] some of that scaling of capacity; you need wide-band transponders for this. There’s absolutely a niche and an opportunity for growth.

How do you see the new relationship with V-Nova helping Eutelsat?

V-Nova opens up an opportunity for us, especially for that high-end niche. If people like what they see in HD at an 80-meg rate on a satellite, there’s no reason we couldn’t put 4K on the same platform. It’s a relatively narrow niche for very high-end broadcast contribution that demands that kind of data rate. But we know it’s there. People spend their billions on rights for premiere events like the Super Bowl and World Cup, so we’re going to see interest in those events. V-Nova is full-frame, full-field, just like the JPEG standard, but it’s optimized for satellite. I think it’s going to make a very interesting niche that is more efficient than JPEG, and we can squeeze it onto a transponder, so there is a really nice niche for it.