CP Communications has been a staple at MLB All-Star Games for many years, but the company set a new bar with its largest presence ever at the event in Washington this week. Running out of CP’s RF7 mobile unit, the 27-person crew rolled out 14 total RF cameras for MLB, Fox Sports, and ESPN; laid down a whopping 50,000 ft. of fiber; and provided full communications connectivity to all clients via Omneo, Dante, and/or analog headend.

“This is by far our biggest All-Star [presence] ever,” says CP Communications President Michael Mason. “With the addition of all the new things MLB Network has taken on this year, it has been a big increase. And we also have so many clients on top of that. Between all the different shows — the game, Home Run Derby, red carpet, [MLB] digital shows, the communications for the league itself — we’re really all over the place here. Trying to wrangle all [the clients] together, get all their needs lined up, and then deliver it all on time is no small task, but we’re up to it.”

In addition to providing a full arsenal of equipment at All-Star, CP Communications handled RF coordination for all events at Nationals Park.

“RF in this town is no picnic,” adds Mason. “The RF Coord team cleared more than 420 frequencies for wireless mics, IFB, and PLs. And that number does not include any of the high-power comms or RF-camera frequencies.”

MLB Network’s expanded role at All-Star this year meant a major expansion for CP Communications as well. The company not only supplied equipment for the network’s studio shows, Red Carpet Show, and world-feed production as it has in the past but also provided equipment for Play Ball Park (across the street from Nationals Park), MLB’s digital productions, and MLB Properties. 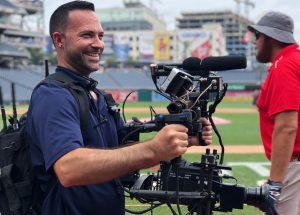 In addition, CP served the MLB Digital shows with an RF handheld (with Wave Central integrated transmitter and paint receiver on a Sony HDC-4300 camera head) and MLB Properties with a Pliant CrewCom system for coverage of the Home Run Derby. The wide-area coverage was integrated with ESPN and the Nationals scoreboard control and further integrated with Fox for the All Star Game.

Plenty of Gear on Hand for Fox Sports, ESPN