NASCAR Productions was honored in the Large-Scale “At Home” Production for Live Sports category for its production of live NASCAR and IMSA race events from its studios in Charlotte, NC. 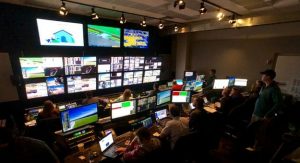 NASCAR Productions was honored in the Large-Scale “At Home” Production for Live Sports category.

“The Technology & Engineering Emmys recognize the very best in our business, so we’re thrilled to receive this award from the National Academy of Television Arts & Sciences,” said Steve Stum, VP, operations and technical production, NASCAR. “It’s a testament to NASCAR’s ongoing commitment to innovation and to finding new and more efficient ways to present our racing events to fans.”

This year, NASCAR Productions produced the IMSA WeatherTech SportsCar Championship’s Rolex 24-hour event at Daytona remotely from Charlotte. This was made possible by fiber-optic technology that enabled content to be transferred from the track to the studio in 20 ms.

“The Technology & Engineering Emmy Award was the first Emmy Award issued in 1949, and it laid the groundwork for all other Emmys to come,” said Adam Sharp, president/CEO, NATAS, in announcing the recipients in November. “We are especially excited to be honoring these prestigious companies and presenting our gala again at the NAB Show, where the intersection of innovation, technology, and excitement in the future of television can be found.”

NASCAR Productions has also been nominated for the 40th annual Sports Emmy Awards in the Outstanding Post-Produced Audio/Sound category and was recognized for its audio production for Feeling Speed, a NASCAR Race Hub documentary exploring how deaf NASCAR fans experience racing.

In addition, FS1 earned a Sports Emmy nomination for Live Event Audio and Sound for its NASCAR on Fox coverage.

The Sports Emmys will be awarded in a ceremony on Monday, May 20 at Jazz at Lincoln Center’s Frederick P. Rose Hall in New York.