Samsung Electronics, Worldwide Olympic Partner in the Wireless Communications Equipment and Computing Equipment category, has announced that the Official App of the PyeongChang 2018 Olympic Winter Games is available for download. 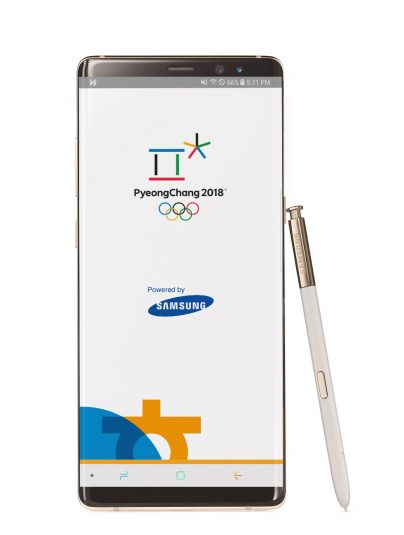 Samsung is once again powering the custom mobile application, as an effort to further enhance the Olympic Winter Games experience for all, ensuring smarter communications and smoother wireless operations during the Olympic Games. The Official App of PyeongChang 2018 was created in partnership with the International Olympic Committee (IOC) and the PyeongChang Organizing Committee for the 2018 Olympic & Paralympic Winter Games (POCOG). The all-in-one app will help fans better enjoy the Olympic Winter Games experience by offering real-time updates, athlete information, medal standings and Olympic and Paralympic records.

Evolving from the Wireless Olympic Works service which began in 2004, the Official App of PyeongChang 2018 offers differentiated content based on location, news updates, ticket and venue information as well as online cheering service to support athletes.

“As part of our commitment to creating an enjoyable Olympic Winter Games experience for athletes, fans, and consumers, we’re proud to create connections, and to help share the Olympic Spirit around the world,” says Younghee Lee, CMO and Executive Vice President, Samsung Electronics. “Through our innovative technology advancements, our goal is to contribute to a meaningful and unforgettable experience for all.”

In addition to providing the latest updates that users need to know about the Olympic Winter Games, the Official App of PyeongChang 2018 is also customizable, allowing users to stay up-to-date on specific events and results they care about the most, and to receive push-notification alerts based on their favorite countries, sports or athletes.

The Official App of PyeongChang 2018 is available in English, Korean, French, Japanese and Chinese, and can be downloaded for free on Google Apps, Google Play Store, and iOS App Store.

Samsung began its Olympic Games involvement as a local sponsor of Olympic Games Seoul 1988. Beginning with Olympic Winter Games Nagano 1998, the company extended its commitment to the Olympic Movement as the Worldwide Olympic Partner in the Wireless Communications Equipment category, providing its proprietary wireless communications platform and mobile devices. These innovative mobile technologies provide the Olympic Community, athletes and fans around the world with interactive communications and information services, and Samsung Pay. Samsung hosts various Olympic campaigns to share the excitement of the Olympic Games with people around the world and enable everyone to participate in the Games through its innovative mobile technology. Samsung’s commitment as a Worldwide Olympic Partner continues through PyeongChang 2018, and Tokyo 2020 in the Wireless Communications Equipment and Computing Equipment category.