The 2022 FIFA World Cup in Qatar is finally upon us, and Fox Sports has constructed an expansive infrastructure at multiple locations in Doha as well as at its stateside Pico facility in Los Angeles. All 64 matches are being aired live on either Fox or FS1, and the broadcaster will be immersing domestic sports fans in all things soccer for the next four weeks. Here’s an in-depth look at the finer details of the production and operations strategy for one of the biggest events on the athletics calendar. 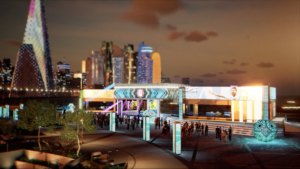 Four unique sets are located on the Doha Corniche.

Located next to the Qatar National Convention Centre, Fox Sports is pulling the production strings at the International Broadcast Centre (IBC), which serves as the central point of connectivity for matches occurring at eight stadiums across the Qatari capital. The broadcaster’s section of the IBC comprises 40 video feeds from every match and six unilateral paths between venues via EVS Neuron Compress; such technology as an EVS router and replay servers, two Ross Video switchers, 13 Grass Valley Alchemists, two Calrec Audio consoles, and a Riedel intercom; and 92 channels of ingest within a SMPTE 2110, UHD HDR complex. 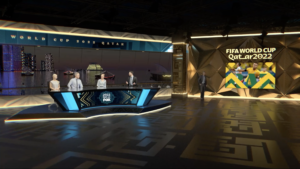 Inside the sprawling footprint, pre-match, halftime, and post-match shows are powered by 18 Grass Valley LDX 150 cameras with Canon 20×5 and 14×4.3 lenses, a Grass Valley switcher, and Grass Valley Alchemist frame-rate converters; an EVS video router and replay servers; Calrec audio consoles, and 24 Sanken COS 11-Ds wireless microphones courtesy of Shure Axient. Graphics and real-time data are dazzling fans, both passers-by and those watching at home. This portion of the show relies on Viz Engine and Viz Trio; Unreal Engine for augmented-reality content; NDI’s cloud workflow; and Stype motion tracking.

To ensure a stellar presentation, TAG Video Systems is offering multiviewing, probing, and monitoring solutions. The services include TAG’s 100%-IP software platform, with more than 1,200 sources driving more than 150 displays, as well as two separate and redundant systems for 40 tech-core racks and 10 venue racks. The Corniche sets are tied into the IBC through 56 bidirectional video paths and can handle an influx of material through 60 channels of ingest.

Away from the Corniche, Fox Sports has another 16- by 16-ft. live set on a platform at Al Bidda Park for all fan festivities.

A Robust Roster of Talent 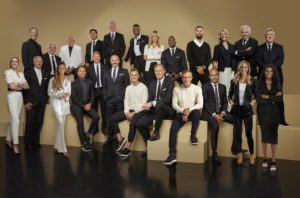 There will be a ton of storylines and gameplay to digest and dissect, and, to handle the waves of narratives expected to unfold over the next 30 days, the broadcaster is deploying an experienced team of on-air talent. The following will play a vital role in documenting this World Cup:

For more information on who’s stationed in Qatar and their respective bios, click HERE. 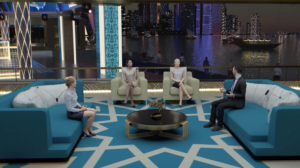 A discussion-style area is available in the waterfront activation.

For the first time in the history of the tournament on Fox, the network is offering in-match previews and live pre-/post-match shows for every match exclusively for Twitter via @FOXSports and @FOXSoccer. The network’s social-media channels also feature nearly real-time match highlights, Q&As with the network’s personalities, weekly live analysis via Twitter Spaces featuring lively audio content around the games, and hand-curated Twitter moments.

Bookending each match, the 2022 FIFA World Cup Now pre- and post-match shows offer commentary and analysis by Beasley, Conrad, Kljestan and Ortiz, alongside the full cast of Fox broadcasters on the ground in Doha. The pre-match show  features live commentary and in-stadium feeds, taking fans inside the stadium as their favorite players get set for competition. After each match, the post-match show spotlights important moments, jersey swaps, and celebrations, complete with instant reaction and best-in-class analysis. 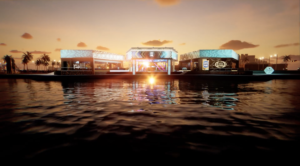 A rendering of the Corniche setup from Doha Bay

The FIFA World Cup Hub has numerous elements for the digital-native soccer supporter. Not only acting as a portal to all of Fox Sports digital content on FOXSports.com and the FOX Sports App, the platform is packed with live streams and full replays of all 64 matches; a Match Center filled with bonus feeds, commentary, rosters, stats, and highlights; exclusive original content; a fan guide to all the happenings in Doha; team pages; schedules; and standings.

For anyone interested in hearing the latest from Qatar, Lalas will record daily episodes of the Alexi Lalas’ State of the Union podcast. Lalas and David Mosse will offr candid conversations, interviews with players and coaches, and feedback from listener commentary via the State of the Union hotline at (657) 549-2297. Every episode will be available on YouTube, Apple, Spotify, or wherever podcasts are consumed.

Former NFL star, FIFA videogame phenom, and soccer super fan Chad ‘Ochocinco’ Johnson (@ochocinco) will provide a first-hand account of the ultimate fan experience in Qatar. He will attend more than 23 World Cup matches over the course of the tournament, including every game in the knock-out rounds and through the Championship, providing video commentary and insight for Fox Sports’ digital platforms every step of the way.

Fox Deportes is pumping out its own content during the month-long competition: English-language encore presentations of the day’s top games, live programs from Doha, special editions of the network’s top news and soccer talk programs. 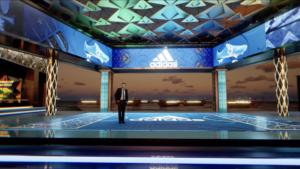 Vizrt’s Viz Engine and Viz Trio as well as Unreal Engine are powering the LED graphics.