FIFA World Cup 2022: BBC on Sharing Facilities for Its Coverage

The proximity of the Qatar 2022 World Cup stadiums provided the BBC with an opportunity to approach its presentation of the football tournament in a different manner. Four years ago, the BBC’s coverage of Russia 2018 was anchored from a studio in Moscow, which provided a base for the broadcaster’s presenting talent. Fast forward to Qatar 2022, and because the eight stadiums being used for the World Cup were within a 35-mile radius of Doha, there wasn’t the need for a central studio as the broadcaster’s presenters and pundits were able to travel to each match. However, that presented the BBC – and ITV, with which the BBC shares coverage of the World Cup – with another set of challenges. 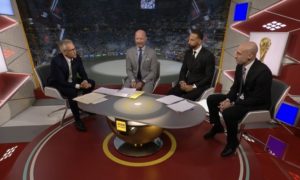 SVG Europe spoke with BBC Sport Engineering Manager Jonathan Hardman mid-way through the tournament at the BBC’s base within the IBC in Doha. Hardman explains: “We looked at it across the piece and realized there was going to be a need for two galleries and effectively eight studios.

“ITV was obviously looking at a very similar problem. And to make it viable, the only way we could think of doing this was to join forces and keep a single technical setup in each of those venues, a similar gallery setup and build the switching center at the IBC.”

That prompted the BBC and ITV to issue a single tender for a facilities and technical services provider for both broadcasters, which Timeline TV was successful in winning. While BBC Sport and ITV Sport have shared the rights to the FIFA World Cup in the UK since 1966, Qatar 2022 was the first time they also shared the facilities across their IBC and venue facilities.

“We felt it was likely to be quite an integrated piece between the connectivity between the studio, gallery and what we’re building here at the IBC. Having one supplier across the whole lot would offer us the best approach, taking advantage of own expertise across all areas. What Timeline has done here, with the one EVS Cerebrum control system, has allowed us to do exactly what we’re hoping to be able to do, which is sit here in the middle and switch between galleries and studios.”

The BBC used two galleries in the UK, which allowed the broadcasters to handle simultaneous matches. Says Hardman: “Our main gallery is based on Timeline’s UHD2 truck, which is parked at MediaCity in Salford in the UK. This operates as a remote gallery with the studio floor in the venue in Doha, but with a twist. We’ve also remoted the vision mixer surface back to the IBC to allow the core editorial team to direct the shows from Doha. We have a second gallery based fully in Dock10 which also acts as a remote gallery for the venue-based studios.”

BBC Sport is running a 1080p50 operation for its presentation elements and post production, which is a first for the broadcasters on a football tournament, says Hardman. Match feeds are also being presented in 4K.

“Both BBC galleries are capable of producing a 4K UHD output, allowing us to produce shows from either gallery,” he says. “From a BBC perspective, with potential short turnaround between transmissions at the gallery end, we needed each venue to be ready to go as soon as it was switched to a gallery.”

Each of the eight venues had a dedicated crew – shared by the BBC and ITV – made up of guarantee engineers from Timeline who remained at each stadium so they got to know the setup in that particular venue as well as the team from host broadcaster HBS.

Each venue was also equipped with four studio cameras, along with the ability to utilize four further cameras for pitch-side, flash and ISOs. For the BBC, these were all routed via the IBC to one of the broadcaster’s remote galleries.

“The cameras are encoded at the venue and decoded in the UK. To minimize latency, we didn’t want to re-encode at the IBC,” says Hardman.

“The nature of the tournament schedule and the turnarounds between broadcasters meant that we needed to keep venue setups straightforward and consistent,” says Hardman. “The base setup that Timeline has delivered is identical across all eight venues. We took the decision early on to avoid any AR or VR in the studios as that would have made the turnarounds more complex.” 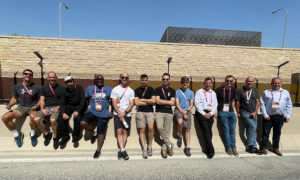 Presentation sound is mixed onsite and fed back to the gallery ready for the final mix in the UK. “This allowed us to make sure that sound facilities onsite were all fully checked prior to the gallery being connected,” says Hardman. “We’ve managed to get the turnaround at the gallery end down to under half an hour from coming off air to rehearsing for the next transmission from a different venue.”

Within the IBC in Doha, the BBC and ITV are positioned next to each other – with Timeline sat in the middle.

“It means we can very easily speak with Timeline as our supplier, but it also means we can walk through the other door and immediately there we have our counterparts at ITV,” says Hardman. “We might spot something; we’ll share with ITV and we will deal with it quicker than we would have done otherwise. Any problem shared is a problem halved.

“One of the key things that has made all this possible has been aligning as much as possible from a technical perspective, but we haven’t pulled everything together completely. The venues are a good example where we’ve said we want to do certain things one way for these reasons and ITV have needed to do it a different way. On some elements we’ve been able to have our own ways of working without adding too much complexity. It’s a credit to both sides that we managed to achieve what we want, without having to compromise”