Deutsche Telekom will be the only German World Cup rightsholder to show all 64 matches, and a big part of its efforts will rely on a hybrid World Cup studio at PLAZAMEDIA at the AGROB Medienpark in Ismaning near Munich.

During MagentaTV’s coverage, the new XR LED Studio from PLAZAMEDIA will be a central element, combining real-set architecture and physical-media feeds with a digitally generated, virtual extension in a 360° world. Centerpiece of the 350-square-meter studio set, in which four cameras realize the interplay of virtual and real elements in real time, is a 33-meter-wide by 3.5-meter-high curved LED wall. As part of its activities as a production-services provider, PLAZAMEDIA GmbH will be responsible for realizing all matches of the 2022 FIFA World Cup on six channels in UHD and HD, as well as signal supervision for the entire inside production on 23 live game days and 29 production days. 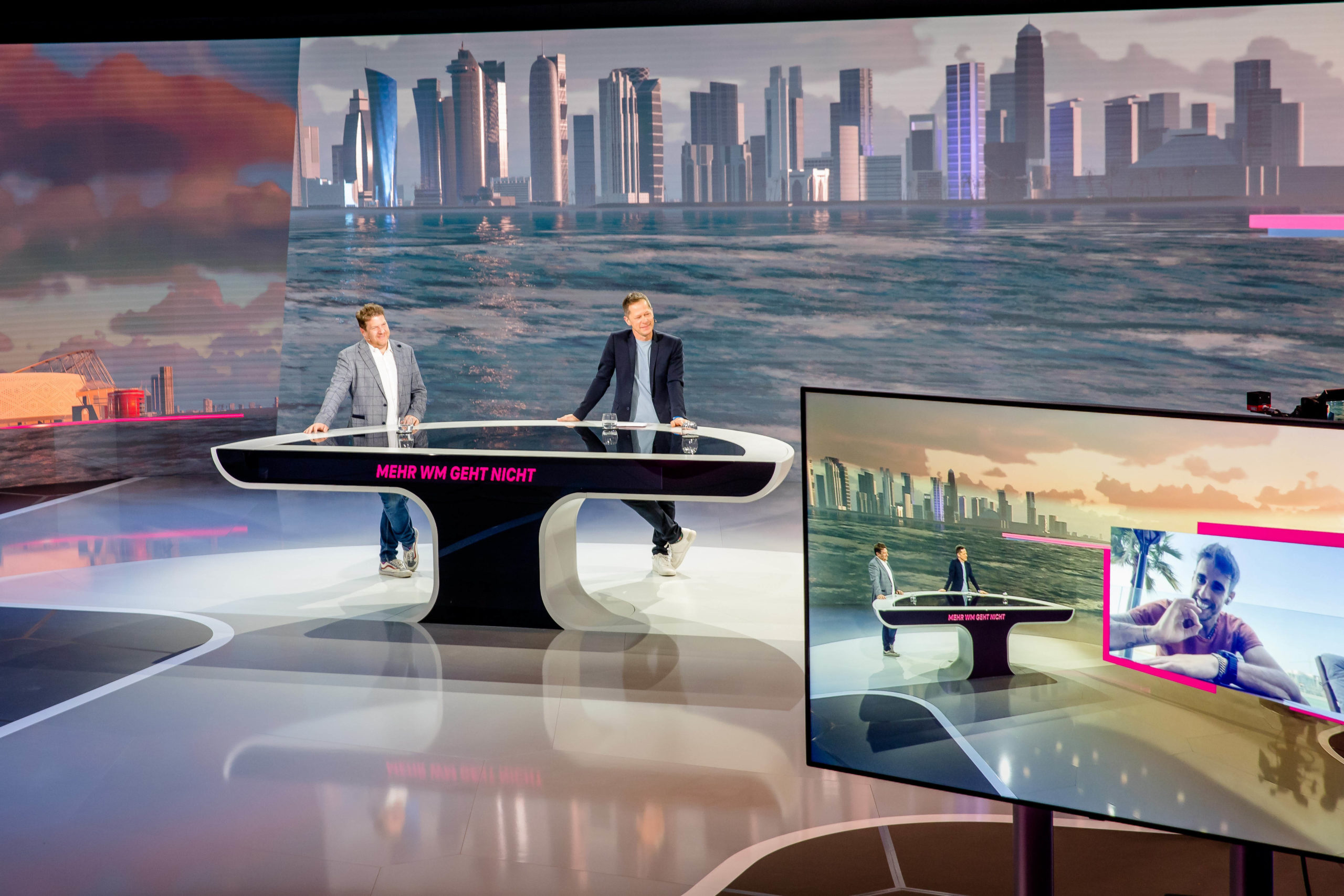 The production for Deutsche Telekom’s MagentaTV will take place on PLAZAMEDIA’s studio premises in Ismaning with an appropriate safety and hygiene concept on 2,600 square meters with six playout channels, the World Cup main studio, and a complete inside-production environment with uninterruptible power supply to provide the major soccer event live and on demand with innovative technology and in best quality — for the first time also in UHD HDR. The 690-square-meter main studio with its state-of-the-art features — including an LED wall from Europe-based Alfalite, augmented reality, and virtual graphics — is creating a completely new experience, drawing viewers at home and in the studio even closer into the World Cup.

PLAZAMEDIA has chosen an LED wall with extremely high viewing-angle stability and a fine pixel pitch of 1.9 mm paired with the Unreal Engine from Epic Games as the real-time render engine. The Unreal Engine contains the digital model of Doha Bay in Qatar: day times, swell of water, and special effects can be changed at any time at one click. The studio ceiling is replaced with an augmented-reality starry sky for the viewer at home.

This is made possible by seamless integration of the Unreal Engine with Vizrt’s Viz Engine used for the AR environment. Combining the Unreal Engine 5 and the Viz Engine 5 offers workflow advantages for use in the World Cup studio, which are fully exploited by PLAZAMEDIA’s technology and graphics team. To ensure that all camera movements are transferred to the virtual world, the position of the four studio cameras is constantly tracked and the data transferred to the render engines using Mo-Sys Startracker and Mo-Sys bMRo systems.

The 2022 World Cup is the perfect occasion for the use of PLAZAMEDIA’s new Extended Reality (XR) LED Studio, which will offer a wide range of possibilities for novel and sustainably realized productions in the future. According to Jens Friedrichs, chairman, Management Board, PLAZAMEDIA GmbH, the company is seizing this opportunity to launch its XR LED studio for creating completely new possibilities in studio productions in Munich.

“On the one hand, regarding state-of-the-art productions combining real and virtual elements and, on the other hand, regarding environmental sustainability,” he explains, “we would like to thank Deutsche Telekom for their great trust and the other service providers involved, such as thinXpool, for their excellent cooperation on this World Cup project.”

MagentaTV is the only provider in Germany to show all 64 World Cup matches — and in UHD via MagentaTV receivers (Media Receiver, MagentaTV One, MagentaTV Stick). Sixteen of the matches will be shown exclusively on Telekom’s TV service, and eight conferences will also be broadcast for the first time.

The World Cup content is covered in all MagentaTV rates for existing and new customers and is available both live and on demand. MagentaTV will broadcast up to 14 hours of programming daily, plus a conference for parallel matches. Telekom will show the World Cup on MagentaTV on three channels, FOOTBALL.TV 1-3. On the first channel, the matches will be available in classic form with commentary. On the second, a special tactics feed will be offered for selected matches with a camera perspective from the long shot and its own tactics commentary. On the third channel, linear TV and social media are combined. Soccer influencers Pascal and Marcel Gurk welcome guests to the social-media studio every day and will follow the matches with them as a reaction stream. On Final Group match days with parallel matches, a conference option will also be available.

PLAZAMEDIA has been working as a cooperation partner for Telekom since August 2019, realizing more than 1,500 live productions per season for linear TV and online/OTT offerings as part of the MagentaSport offering, including from the PENNY DEL, the easyCredit Basketball Bundesliga, the German soccer 3rd League, and the FLYERALARM Women’s Bundesliga in soccer. Last year, PLAZAMEDIA staged the European Soccer Championship as a production-services provider for Deutsche Telekom.