The FIFA World Cup Qatar 2022 is set to begin this weekend, and the FIFA World Cup Division, which is responsible for the broadcast production, and Host Broadcast Services (HBS) are ready to cover all the action with a team of around 2,500 people. Here is a look at key production highlights and advances.

The compact nature of this year’s World Cup will allow production crews to be split into two match clusters that will travel between the eight stadiums and are headed by six world-class directors (Francois Lanaud, Grant Philips, Jamie Oakford, Laurant Lachand, Sarah Cheadle, and Sebastian von Freyberg).

The standard camera plan has 42 cameras, and both super-slo-mo and ultra-slo-mo will be in the mix, covering key players. Several RF cameras will also be used to capture activities — fan coverage, team arrivals, VIP and player interviews — in and around the stadium. 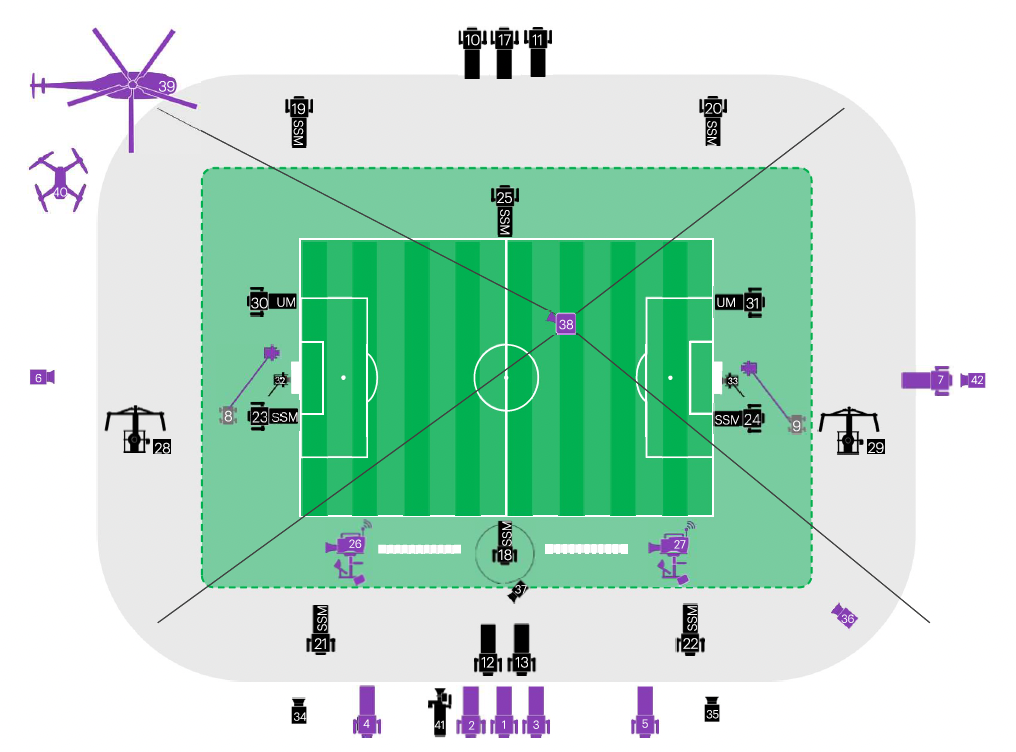 The standard camera plan for World Cup matches is built around 42 cameras.

The biggest leap this year will be a single-unified-layer capture/transmission workflow for UHD/HDR coverage of all 64 matches. In 2018, a multilateral, dual-layer approach was required, but advances in technology will allow all formats to be integrated into a single workflow, greatly streamlining operations and setup.

With respect to HDR, hybrid log gamma (HLG) will be used to provide a standardized and easy-to-manage set of color transformations between SDR and HDR. UHD/HDR capture will be done from selected standard cameras at 50 fps and 1080p from cameras shooting at 150 fps and higher. Replay and recording will be in HDR, and a common HDR opto-electronic transfer function will be used for all cameras. Shading will be done in SDR, and SDR signals will be down-mapped out of the HDR material. 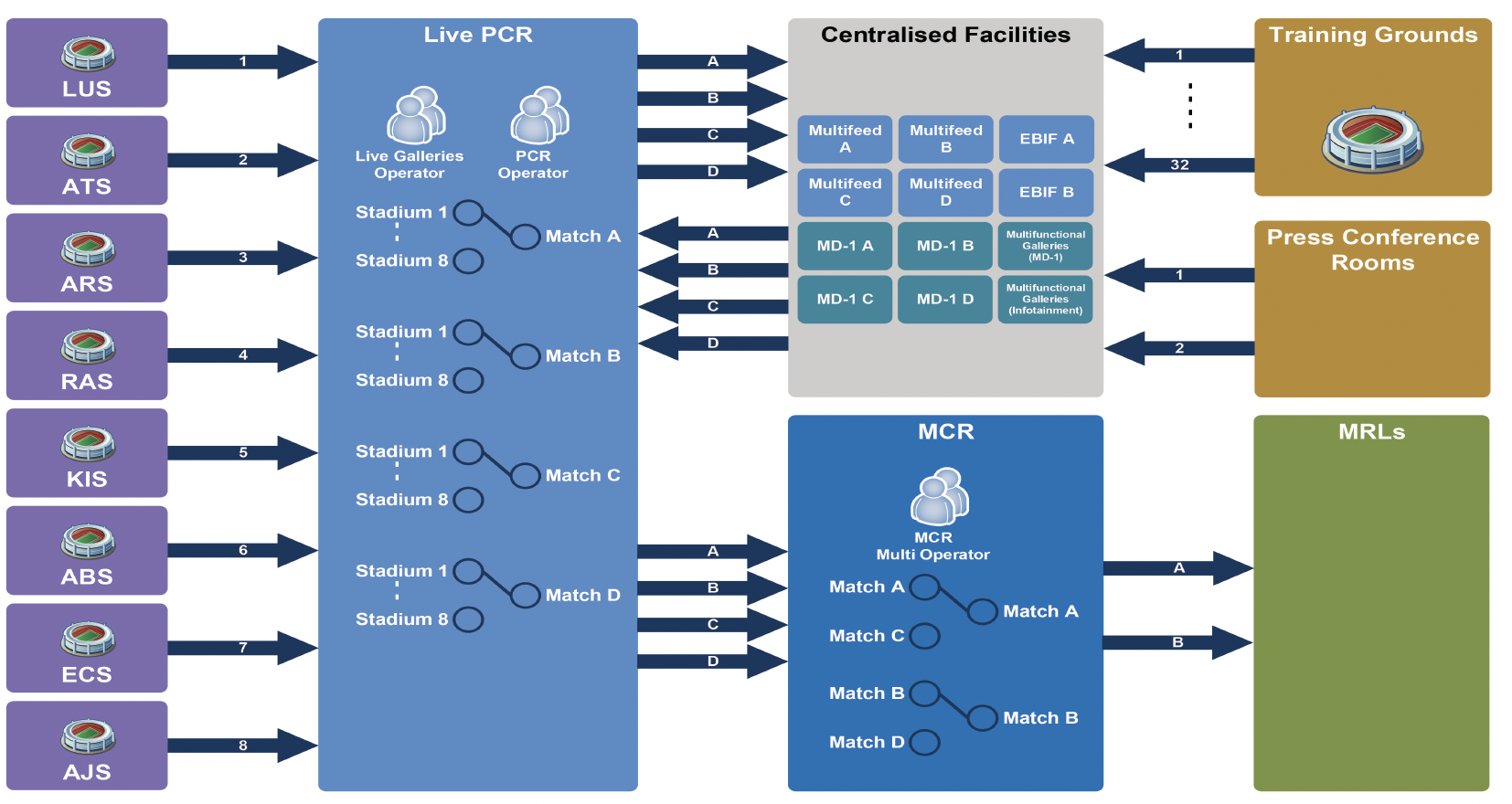 At the core of live content distribution are the multi-feeds allowing FIFA to provide a wide range of match, pre- and post-match, and other content to rightsholders. Multilateral feeds and selected isolated cameras will also be available in different formats, including 12G-SDI UHD/HDR BT.2020 at 2160p/50 for selected isolated cameras and the Extended Stadium Feed. All multi-feeds will be available to rightsholders in 3G SDI-HDR (BT.2020), 3G-SDI SDI (REC.709), and HD-SDI SDI (REC.709). Each one will have up to 16 embedded audio channels.

The lineup of feeds:

Another important service offering is the cloud-based media server, FIFA MAX (Media Asset Exchange), which allows rightsholders to find a treasure trove of content. The 2022 version will be capable of holding 6,000 hours of content, all of which can be accessed via the FIFA Content Interface. Best of all, rightsholders can access it whether or not they are based at the IBC, giving production professionals thousands of miles away a chance to boost content creation and output. Content will be stored via XAVC-I at 1080p/50, and the server also supports ingest and delivery in HDR (with SDR preview).

Rightsholders will have a choice not only of a basic-stereo mix and a 5.1 surround-sound mix but also a 5.1.4 immersive mix produced in two immersive-sound galleries at the IBC. At the center of those efforts, an eight-capsule microphone array at each stadium is supported by additional three-dimensional microphone arrays located closer to the spectators. 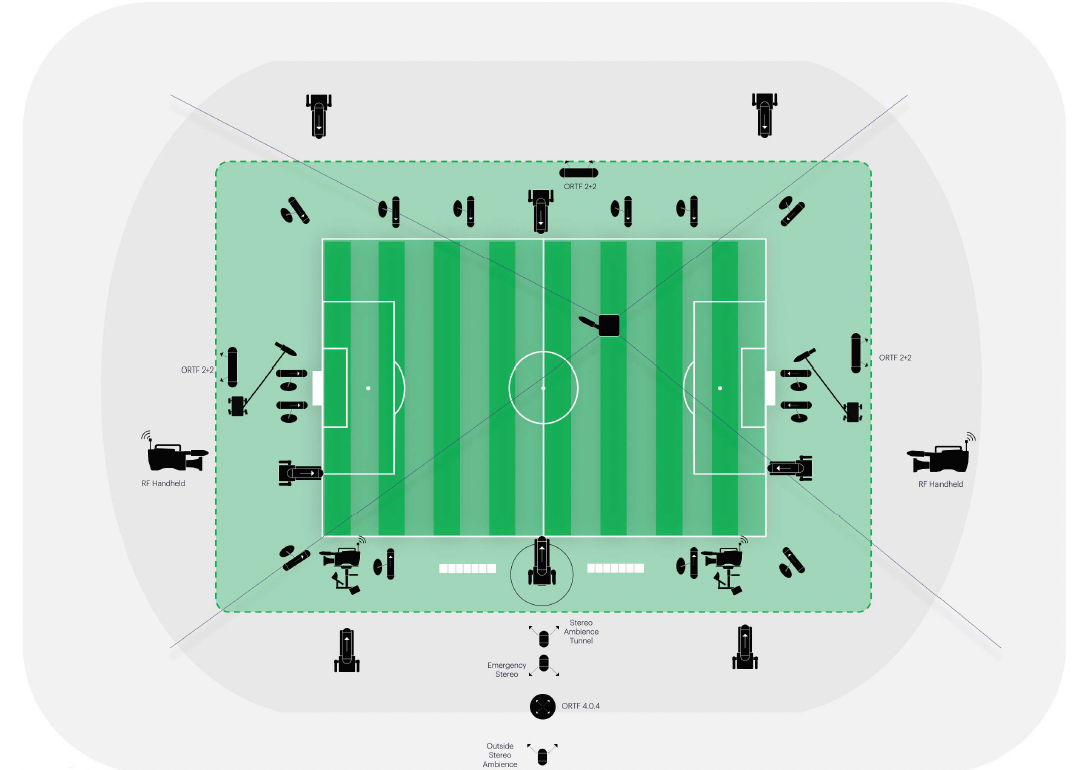 The immersive-audio package contains channel-based premixes layered with audio objects that can be preset. Rightsholders distributing in immersive formats like MPEG-H and AC-4 will have access to a fully personalized listening experience, which includes volume control of individual elements and different commentaries.