The digital team at FOX Sports likes to use a lot of sayings, one of which is a nod to Iron Mike’s famous quote, “Everyone has a plan until they get punched in the mouth”. You can bet they’ve taken some punches over the years while producing content on the biggest stages in sports. But they’ve never ended up with their back on the mat, and their success in the content ring is powered by a talented team of heavyweight producers who rely on a lean and mean production to punch back.

The biggest fight for content creators in 2022; keeping up with content demand. According to a recent comScore survey, more than 20 billion hours of video are consumed every month in the United States. “Interests and the ways in which fans can consume content are so diversified,” said Michael Bucklin, Senior Vice President, Digital, FOX Sports. “Fans have the option to consume whenever, wherever, and however they prefer to consume content.” 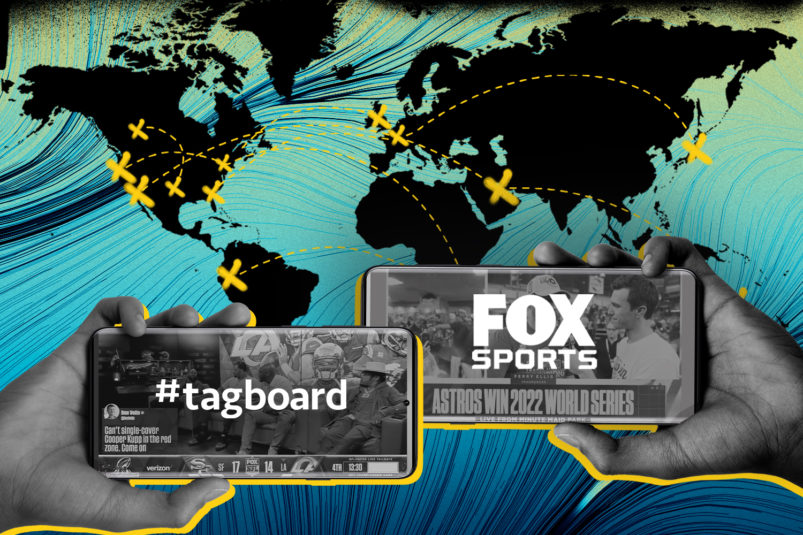 If you’re not creating content that allows your audience to pick when, where, and how they want to consume it, then you’re missing out on viewership. The second part of that is making sure it’s quality, unique, and relevant so it stands out in a sea of options. “Consumers are so used to pretty much everything – you really have to push yourself creatively to cut through today,” said Nick Rago, Executive Director, Digital & Social Production, FOX Sports.

One way FOX Sports cuts through is by leaning on cloud production. They’ve been able to optimize workflows to keep up with content demands, introduce interactive elements that make the audience feel more connected, and stay nimble during live video productions; adjusting graphics in mere seconds – a workflow that previously took minutes to complete.

“When you’re in a live environment and things are constantly changing and you go from something that used to take you minutes to now taking you seconds – that’s everything,” said Ricardo Perez-Selsky, Sr. Director Digital Production Operations, FOX Sports. “The broadcast hinges on you being able to pull in that data, or those tweets, or fan questions. It makes the content feel more real and active for the viewer.”

To paint the picture of what past live streaming production workflows looked like for the digital team: “It used to literally be get as many bodies as you can, jump into Photoshop to create 55 different lower third topic bars as .png files, and then slack them over to a director in a zip file so they could upload it into the system to punch live and switch out as they go,” explains Jonathan Berger, Executive Director of Cross-Platform, Programming & Production, FOX Sports.

Bucklin adds that, “In one case, we were taping written tweets to Nerf footballs and throwing them to our talent on the set so that they could read what the tweet is”. An extremely creative and entertaining method, but you’re asking a lot for your producer to have a better passing accuracy than the All-Pro quarterbacks you’re covering.

“That was the pre-Tagboard digital graphics era,” said Bucklin. “Now {cloud-production through Tagboard} is a standard part of the workflow. And a person in Los Angeles can do it for a production crew on the other side of the world, which we’re about to do with Qatar.”

The plan for a record-breaking FIFA World Cup Qatar 2022™

As the team at FOX Sports gets ready to cover FIFA World Cup Qatar 2022™, Bucklin explains what they hope to achieve in Qatar. “Our goal is pretty simple: We want to offer the greatest digital content coverage in the history of sports media.”

The plan is probably too robust to list everything here, but includes highlights (every single save, goal, trick, and moment will be distributed in under 5 minutes across the FOX Sports App, FOXSports.com, and to @FOXSoccer social channels) cut from all 64 matches, 500+ written stories, original digital content, and 128 live pre- and postgame shows streamed on Twitter.

“This will be our biggest World Cup we’ve ever had,” said Perez-Selsky. “We’re sending our biggest team that we’ve ever sent to a World Cup. A large part of that is because we’ll be doing pre- and postgame shows for every game of the World Cup exclusively on Twitter. With 64 games that’s 128 total livestreams.”

“Tagboard is going to be our main graphics hub for everything that goes into these live shows,” said Perez-Selsky. “Audience reaction is key for this content. As well as any sort of graphics we want to do for lower thirds, top 5 players, or things like that. It’s all going to add to the dynamic nature of what we’re trying to do with these pre- and postgame shows on Twitter.”

Standard broadcast graphics are one element of the live video productions, but interactive and real-time audience reactions will go a long way in creating a broadcast that connects the world. “We want to use the footage that fans across the globe are taking of their favorite sports bar, their downtown, their city square, celebrating their favorite team. It just puts it in perspective,” said Bucklin. “And Tagboard allows us to help sort of visualize the enormity of the scale of what we’re trying to cover.”

Cloud-production through Tagboard also allows the FOX Sports digital team to lean on a talented team of producers who will be providing round the clock support from the FOX lot in Los Angeles. An 11-hour time difference and 8,000 miles apart, but a workflow that doesn’t sacrifice on quality while creating efficiencies that help the bottom line.

“In terms of cost savings, it’s massive,” said Perez-Selsky. “You can imagine sending someone halfway around the world for 35 days is not cheap. Being able to cut down on the amount of people in Qatar was huge.”

“We would not be able to produce this tournament to the quality that we planned to cover it without having a highly talented and very connected team back in Los Angeles,” said Bucklin. “The team in Los Angeles will be our backbone.”

“I think that by the end of it we’ll be looking at something that’s never been done before on a digital platform,” adds Perez-Selsky.

Putting the world stage in the palm of your hand

Putting on the biggest event in the world is enough to keep some busy for the year, but for the digital team at FOX Sports it’s one of many global events they cover. The dust has hardly settled on their multi-week MLB playoff and World Series productions, which saw @MLBONFOX social channels set all-time highs for views across all their platforms. And it was through live shows on-site by their Flippin’ Bats podcast (which saw a 156% increase in podcast downloads YOY), that introduced the world to the ‘Philly Hello’, maybe the most viral moment of the World Series. It was a moment that developed organically just before they were about to go live, and they leaned on Tagboard’s cloud production platform to pull it all together.

“It creates a very dynamic environment where something happens a few minutes before we go to air,’ explains Rago. “We’re able to quickly reorganize our rundown, get that tweet shown full, update a lower third, and create a segment that was one of our best pieces of content throughout the World Series”.

“We have a Tagboard producer in the control room for every single major broadcast at this company. They’re monitoring feeds of celebrities, athletes, and fans looking for real-time reactions that they can bring to screen,” said Bucklin. “That creates a moment that I think people remember. We think those are sticky moments. We think people enjoy that as an enhancement to the broadcast.”

And when the cup is raised in Qatar in late December, attention will quickly turn to covering Super Bowl LVII. Another global event, and another round in the ring for the world beating team at FOX Sports.

“We find ourselves in 2022, doing battle with, in the politest way possible, more outlets and brands and entities,” said Berger. “I think that poses a unique challenge for us that allows us to figure out different ways to continue to cut through and to really double down and take advantage of what it is that FOX Sports has to offer.”