Ask Director Laurent Lachand how he’ll approach directing Sunday’s 2022 FIFA World Cup Final, and his answer is similar to one that a player might give. “A match is a match for me, and I try to have the same investment regardless of the level or the occasion,” he says. “Sure, a World Cup Final is different, but it’s the same in the sense that it is still 90-minutes of normal time. In my position, it’s important not to have too much emotion because if you do, you’re not in control.”

Lachand also expects to have similar production plans for the final, with no major additions to the 42-camera setup that has been used to capture the action since the opening round of fixtures. 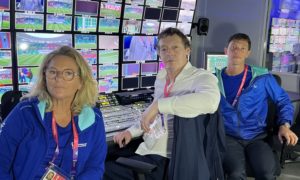 “The setup for the World Cup is amazing, and when we have such a good setup, and a good crew, if you add too much for the last match it can make things overly complicated,” he says.

Consistency is a common theme of the conversation with Lachand, whose credits include directing this year’s Champions League final as well as matches at the 2002 and 2018 FIFA World Cups, the FIFA Women’s World Cup in Canada in 2015, UEFA Euro 2016 in France and a host of French domestic and Champions League matches with Canal+.

“The crew that will be with me for the final on Sunday is the same as since 2002. In France, I work all the time with five camera operators on all my matches. And with the same EVS operators, slow-mo producer, floor manager and PA. With that crew we have a guaranteed, stable foundation. And then we can take other people and add them to the crew. A director alone is nothing, you need a good group and if you go forward, you go forward together.”

By the time the World Cup trophy is lifted by either Argentina, Croatia, France or Morocco, Lachand and his team will have worked on 14 matches, including two quarter finals, one semi-final and the final.

“I think we have the most immersive coverage ever for a World Cup,” says Lachand, speaking with SVG in Doha around mid-way through the tournament. For Qatar 2022, FIFA together with host broadcaster HBS has introduced a single-layer production standard based on HDR. That, says, Lachand, has had an impact on his approach to covering games.

“You need less cutting from the main camera, because with the quality of the images, you see the players very well. So you need to be a little bit more conservative.”

Lachand says that since he started directing, he has gradually become more conservative when it comes to his style of overseeing coverage of a match.

“Not so much in terms of risk,” he explains. “It’s more about not imposing your own vision of the game. Sometimes, the best thing is to stay live because you need to see the interaction between players, or you need to see if the coach does something. So trying to remain live is more important than everything else.”

With some 42 cameras at his disposal, an increase in the amount of data and graphics to incorporate into coverage and FIFA’s efforts to reduce stoppages and the amount time that the ball is out of play, it must be a challenge to balance live coverage with replays and additional information.

“We need to be fast,” says Lachand. “We have to be focused on the game, with a full understanding of what’s happening. And sometimes, one slow-mo replay is enough, and we don’t need three or four. If something needs explaining and one slow-mo replay is enough to resolve it, that is fine. And we have different tools for different moments, so it’s about choosing the right one.”

Those different tools include semi-automated offside technology, provided via 12 dedicated cameras beneath the stadium roof to track the ball (which also has sensors) and up to 29 data points for each player, 50 times per second, to calculate their exact position on the pitch. The 29 collected data points include all limbs and extremities relevant for making offside calls.

“We have new improvements regarding VAR and the treatment of the VAR, and I think it’s great, because it’s much clearer. It’s clear who is in front and who is behind. It has been a little complicated to bring all these tools together, but now, after a little more experience, we are faster and that is the point with these tools.”

Looking ahead, Lachand says that with pundits and viewers increasingly interested in the tactial aspects of the game, he would like to see further analysis added to replays. “I would like to have the opportunity on a second round of slo-mo to provide simple tools to do some tactical information on the slow-mo to explain a little better the tactical aspect, perhaps using a simple but very fast and quick to use palette.

Another new addition to this year’s production and broadcast plans is the use of cine-style cameras. Lachand says the cameras have helped to create “very intense and very important moments in the tunnel before the players go to the pitch”.

He says: “For me, it’s very important to focus on the players, and share with viewers a last moment before the game. And I think this tool is very efficient for that, because we can concentrate a viewer’s eyes on one person.

“And then after the tunnel, we use this camera for fans, because it’s one of the most particular things about the World Cup. The beautiful atmosphere with fans is very different to the Premier League, French League 1 or the Champions League. It is more friendly and full of respect, and these cameras are a very efficient way to do this.”

So far, four of the knockout matches at Qatar 2022 have been settled by penalty shootout. Viewers will have noticed that their perspective is different from that at Russia 2018, with a Spidercam now providing a view from behind the penalty taker. 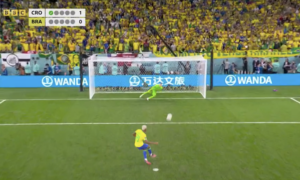 “But if there is a penalty during the game, we stick with the main camera. The reason for that is because during the match there could easily be a second ball. You could cut away from the Spidercam back to the main cameras, but then you might have the Spidercam in shot and we want to avoid seeing the tools we use. I always give the example of a trip to the theatre; you don’t want to see the person moving the scenery.”