The FIFA World Cup brings nations near and far to the International Broadcast Centre, and situated within the Qatar National Convention Centre, countries big and small are sending feeds back home in different ways. Poland’s TVP Sport, for example, is a country that’s blowing out their coverage of this year’s tournament with an onsite OB van, nine separate shooting positions, and a studio at a local hotel in Qatar.

“We’ve been cooperating with our colleagues from our news division on a daily basis as well,” says Dominik Kopacz, international coordinator, TVP Sport. “From the technical side, everything has gone really well.” 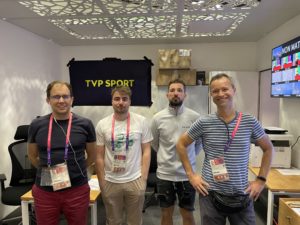 Prior to arriving to Doha, Kopacz and his crew needed to nail down their way of producing this content. Understanding that going down the IP route was a bit expensive, the team chose to go down the more traditional path as a cost-effective measure. After discussing with some of their European clients, they zeroed in on the services of EBU, who handles their broadcasting rights through a deal with FIFA. To simplify the costs even further, the individuals operating the OB van are from Qatar’ neighbor, Saudi Arabia.

The OB van has been a key part of their operations strategy for all Polish Team matches. It was used to produce unilateral content from positions provided by HBS. Using infrastructure provided by the HBS between each shooting locations (974 stadium, Education City Stadium and Al Thumama Stadium) and the IBC, the team is able to deliver unilateral content produced on-site to the IBC and then to Warsaw thru the fiber. Then, in Warsaw already, unilateral content is added to the match feed bringing viewers of one picture from each Polish Team game.

“We’re essentially responsible for two productions. The first one is related to the ‘HBS’ produced’ signal distribution, when the second to the unilateral production scheduled before and after each Polish Team match is planned. Our OB VAN on site is here to secure our unilateral production on each stadium we are playing. Multilateral and unilateral content is being sent to Warsaw thru the fiber network. Moreover satellite back has been requested from the HBS for all 64 matches.

On the studio side, the biggest operation however has been its main studio set at the Sapphire Plaza Hotel. Equipped with three cameras, these prematch and postmatch shows are sent back to the IBC TELCO room via Ooredoo pipeline (ethernet over fiber) before heading to TVP’s dedicated location in the IBC and then off to Warsaw for distribution online and linearly on TVP Sport, TVP1 and TVP2. For matchdays Host Broadcast Services (HBS) sends the commentary feed from the venue to the IBC and then directly to Poland

These intricate productions began with the squad’s group stage fixtures against Mexico on Nov. 22, Saudi Arabia on Nov. 26, and Argentina on Nov. 30. Even after Poland’s run ended against defending champion France on Dec. 4, TVP Sport will continue to provide content through the Final on Dec. 18. Polish Team matches attracted more than 12 million viewers per match which is the highest rating in the last two editions of the FIFA World Cup.

As for onsite personnel, a total of 58 employees have come from Poland, including five ENG crews (four for broadcast and one for digital) and six pairs of commentary teams. At the IBC, Kopacz is working alongside Head of Sports Events Broadcasting Marcin Szuba and Editors Łukasz Jaźnicki and Jan Dąbkowski.