NOS is one of many World Cup rights holders to have a base at the IBC in Doha, where it is switching lines for colleagues back in the Netherlands and sourcing unilateral footage from other broadcasters. Speaking with SVG Europe ahead of the Netherlands v USA round of 16 match, Editor Jeroen Verbaan said the Dutch public service broadcaster had a total of around 30 staff in Qatar for the World Cup, with a few based at the IBC and others moving between stadiums for the Netherlands’ fixtures. 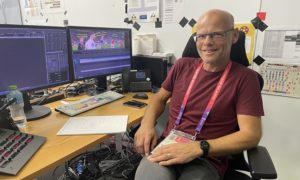 Verbaan’s colleagues in Hilversum – where NOS is headquartered with around 150 staff in its sport department – are responsible for cutting match coverage.

For a match featuring the Netherlands, coverage typically begins two hours ahead of kick-off, with preview content featuring interviews with players and coaches. After the match, there is usually a review of an hour although “when the Netherlands win, that may be a little bit more,” says Verbaan.

“During the group stages, we had four games per day, which was a lot of games for us to switch lines for Hilversum. It’s really busy, but nice work.

“We have access to the FIFA Max server in Hilversum, so editors there can take pictures for broadcasting from Hilversum. There is also footage that is not coming from FIFA Max, which we take from the other broadcasters.

“It’s nice to show the emotion, the screaming and all the spectators. So we are dealing with all the ENG footage, bringing it together and sending it to Hilversum via WeTransfer. That is our main job.

“There is a lot of content [from HBS], more than we can use. I think each match is hours and hours of extra content. You take a little bit for your own programme. But, you can choose, so that’s a big difference.

“With the number of feeds you can see everything. An example of that is the Japan match, where there were some questions about whether the ball went out of play before Japan scored. For each match, we have eight incoming lines which we can put through to Hilversum and they can edit – that is more than enough.”