The countdown to Super Bowl LIII is under way, and, for the production team at CBS Sports, it is the culmination of years of work, site visits, and planning. As usual, it’s a massive effort and will provide plenty of innovation, including a show open that no one will want to miss.

“I think we make a great team,” she says. 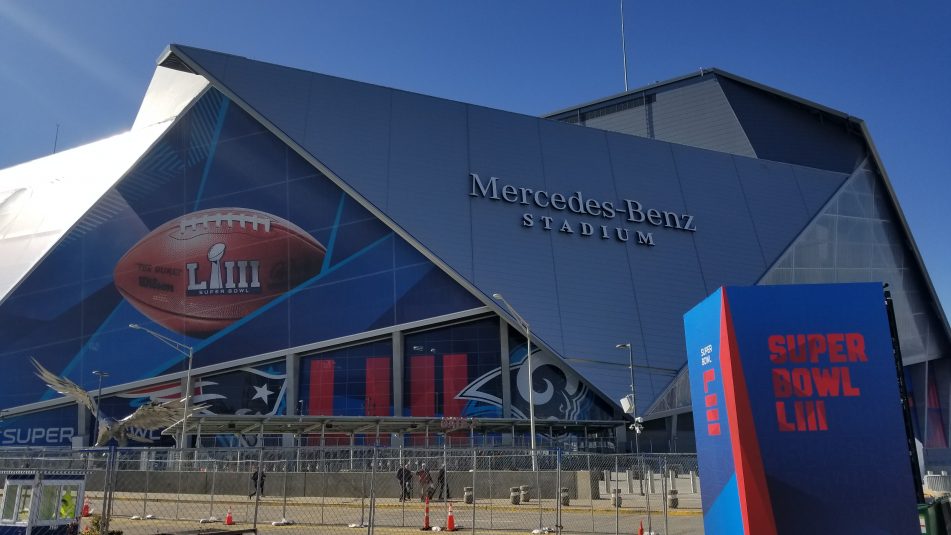 Mercedes-Benz Stadium is home to Super Bowl LIII on CBS this Sunday.

The efforts, as usual for a Super Bowl, are impressive. The CBS presence in the compound comprises 14 mobile trucks and 12 office trailers. There are 115 cameras being shared among 332 channels of record and playback, and 2,000 channels of local intercom (and 50 channels trunked to New York) ensure that production and technical operations go smoothly. CP Communications is handling all frequency coordination as well as wireless comms, wireless IFB mics, supplemental audio gear, and all audio efforts on the field and all five sets.

Francis says that having access to dark fiber to the sets has given the team control with respect to sharing resources wherever they are needed. There are also 29 transmission and receive paths, five uplinks, and 10 Gbps of data circuits for file transfers as CBS leverages the team back home.

“[For Super Bowl 50 at Levi’s Stadium in Santa Clara, CA,] we had 12 edits onsite. For this Super Bowl, we still have 12, but six of them are here in Atlanta and six are back in New York,” says Power. “It’s been up since Monday. It has been going pretty well so far with file transfers and communication between the two teams [onsite and in New York].”

ThumbWar provides the six edit systems, and they are located in NEP’s CBS D unit, which is the edit truck CBS relies on for golf and postseason football, and two Game Creek Video edit trucks.

“We were able to save a lot of setup time as opposed to setting up in a production trailer,” says Francis. “Everybody has the same visibility and ability to share media, and having 10 Gbps of bandwidth between the two cities obviously helps with that.”

This year’s efforts actually include an impressive technical undertaking for the opening of the show. For the first time ever, augmented reality will be deployed in a multicamera environment, bringing AR graphics to four camera angles that, combined, will deliver a new and exciting look to the big game and also lay the groundwork for similar innovations. 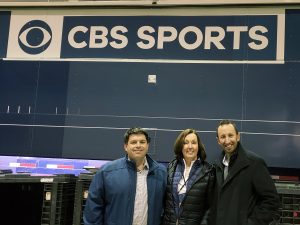 Cohen has worked closely with The Future Group, Ncam, and AVS to bring AR to not only the SkyCam but also a technojib, an all-22 angle, and a wireless Steadicam, which he describes as “a bit of a science project.”

“The production team had the idea to do a multicamera AR open, but AR has been done in a pretty conservative way for a long time,” he says. “While the wireless Steadicam is cool in and of itself, it’s having four very different camera rigs all working in sync as a four-camera cut to open the game that is most interesting.”

The Future Group-built animatic for the open is loaded onto an EVS and features an audio track with sound effects and music, as well as an audio cue that uses timecode to trigger four AR servers running The Future Group’s Pixotope software, and the four AR servers in sync with the audio cue begin their playout of the graphics effects, which is simply four cameras being played through them.

Says Cohen, “The TD built an auto timeline in the switcher so that, when he says, roll the embedded cue, the switcher cuts all four cameras by itself . Assuming it all works well, it goes for 20 seconds; then we have the big tease, and off we go with the game.”

The AR innovations extend beyond the show open. The main set on the concourse level also has two AR cameras that will bring a new look to coverage, and SMT will once again play a key role in AR efforts. SMT will supply its Sportcg scorebug, virtual first and 10 line, virtual CameraTracker on the two SkyCams, live, realtime stats via QBStat, telestration technology and virtual goal post extensions. SMT’s Camera Tracker system was also instrumental in collecting the field geometry data that Future Group used to render the graphics for the spectacular show open.

The multicamera application of AR at the top of the show, however, is what Cohen thinks will have a lasting impact.

“Now we can see how AR productions can be taken to other sports,” he explains. “It is a bit of a science project, as the Steadicam operator is on a wireless rig and he has a computer technician who is tethered to him. That computer takes the tracking data off the lens and then sends it wirelessly to the Ncam server in the truck. Ncam and AVS have been working on this in London for about four months.”

CBS will deploy 115 cameras, including 10 4K Sony HDC-4800 cameras with high-speed recording and zoom. And, in a true innovation, three Panasonic AK-SHB800 8K cameras will be deployed around the field, with one above each end zone in the cat walk and then one at the all-22 position. The three Panasonic cameras will play out via Evertz DreamCatcher replay systems; the Sony 4K systems will rely on Sony PSW-4500 replay servers.

The Panasonic 8K cameras connect to an AK-SHU800 camera-control unit via two single-mode fiber lines like a regular studio camera, but the CCU outputs the 8K signal as four 12-Gbps 4K signals. Each of those four signals is converted to four 3-Gbps signals and passed to the DreamCatcher via 16 3-Gbps inputs.

One of the plays in the AFC Championship game, a punt that appeared to have hit New England Patriot wide receiver Julian Edelman, exemplifies the benefits of having 8K cameras as part of the arsenal.

Explains Francis, “On that play, they zoomed past 400% to show what happened. Once you do that, you start to get beyond good image resolution, and it gets a little grainy. With 8K, you can go to 800% before you get the blur and gets a little grainy. So we’re taking things to that next level.”

The team is also mounting three Pico cameras on the goalpost to help capture shots of the line at the back of each end zone.

Another barrier that CBS will break is the use of three SkyCams in a stadium.

“The third SkyCam will fly over the concourse, where our main set is located,” says Francis. “It was a tricky rigging, but SkyCam did a great job of finding out how to get it done, and they had to set up the operator position in a catwalk.”

Also helping with the coverage will be an 8K C360 Live camera mounted on a catwalk at the top of the stadium. Located above the Halo videoboard, it opens up the possibility for dramatic shots that seem to have been captured from a blimp rather than a small, 4-lb. camera. Moves can be programmed for the C360, giving it the ability to zoom into the stadium and add yet another angle to coverage of things like player introductions.

The production team is also using some of the newer lenses on the market, including Canon’s new 122X lens and four 111X lenses. Fujinon 107X lenses will also be used. 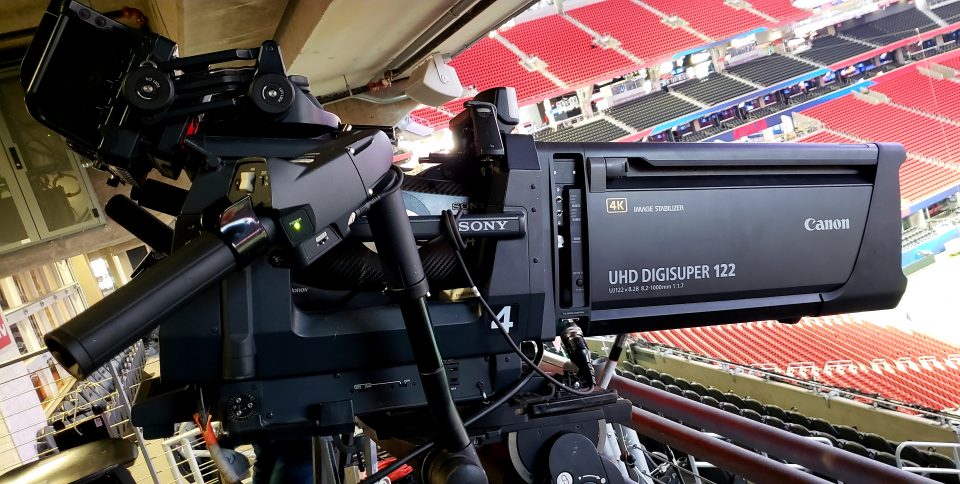 Canon’s 122X lens will be on the reverse 50-yard line for Super Bowl LIII.

Even the booth is getting a bit of technical innovation with a JitaCam mounted on a robotic rail, which will give some movement to shots of the announcers and even of the field.

The final imaging innovation will be a tethered drone from Measure, which will be located a little more than half a mile from the stadium. It will use a LiveU transmitter and a cable modem to send exterior shots of the stadium with the Atlanta skyline in the background. Because it is tethered, it will be powered continuously and will be able to get a shot that otherwise wasn’t possible.

“The highest we could get on a building was just under 100 ft.,” adds Cohen,“so we went through a bunch of different concepts.”

With all the cameras, Francis is confident that the team is ready to supply all the correct angles.

“With the three 8K cameras, the 10 4K cameras, and 28 pylon cameras in each end zone, there isn’t one square inch of the field that we don’t have covered,” he points out. “And, on the low SkyCam, we have a Sony P43 with 6X super-slo-mo, and we have one of the first Sony P50 4K cameras on the high SkyCam, so we have the ability to zoom from there as well.”

Power says the CBS team spent weeks on disaster recovery, developing clear plans that were available to everyone on the production and technical teams for a large variety of disaster scenarios and the appropriate steps.

“From a planning perspective,” she says, “we documented everything, and power is just one piece of that. Everyone needs to know where to go and what to do if something happens, so that we aren’t making it up as we go.”

And when it comes to redundant power, CBS is again taking things up a notch. For Super Bowl 50, the network worked with Filmwerks International to develop a new type of UPS generator that protected the game truck.

The key to Super Bowl coverage and innovation, he adds, is to bring technology that enhances the storytelling.

Power notes that, at the end of the day it is still a football game: “You don’t want to be too distracting” with innovations.

Here’s the quick breakdown of the trucks onsite and their roles:

NEP’s SSCBS A, B, C, and D units are at the center of the effort. The A unit will house game production, game graphics, and goalpost–robo-camera operation. The B unit will have game audio and IPG distribution headend; the C unit will house the majority of EVS game replay operators, ChyronHego operations, and SMT first-down-line operations. The D unit, meanwhile, will handle tease edits.

Game Creek Video’s Encore A unit will be on hand for additional game video, pre/postgame audio and video, and 8K operations; the B unit will handle pre/postproduction, graphics, and C360 operations. The C unit will be home to pre/post EVS, the Sony server operators who are working with the Fletcher-provided HDC-4800 4K cameras, and 8K operators.

Game Creek Edit 3, 4, and B-5 will also play key roles. Edit 3 will do ingests, game and pre/post editing, color tease, game After Effects operations, and MAM. Edit 4 will house pre/post After Effects, pre/post Duets, and graphics management. And B-5 will be home to pan-bar robotic operations and all other Fletcher robos except for those on the goalposts, which are handled in NEP SSCBS A.

NEP’s TX/ESU trailer will be onsite for router distribution, transmission control, and distribution to the world feed, Mercedes-Benz Stadium, halftime show, and all other outside vendors.

And the AVS RF truck will be on hand to manage all RF cameras for game and pre/post as well as camera-feed distribution to SSCBS B, Encore A, and video-paint control in those trucks.