The game will be distributed to 180+ countries in 25 languages

The NFL Films world feed of Super Bowl LIII will once again play a big role around the world, ultimately being distributed to more than 180 countries and territories and in 25 languages. And, in a sign of the game’s growing popularity outside the U.S., broadcasters from 25 countries will be onsite, the most ever. Twelve of them will have studios; the rest will be commentary only. 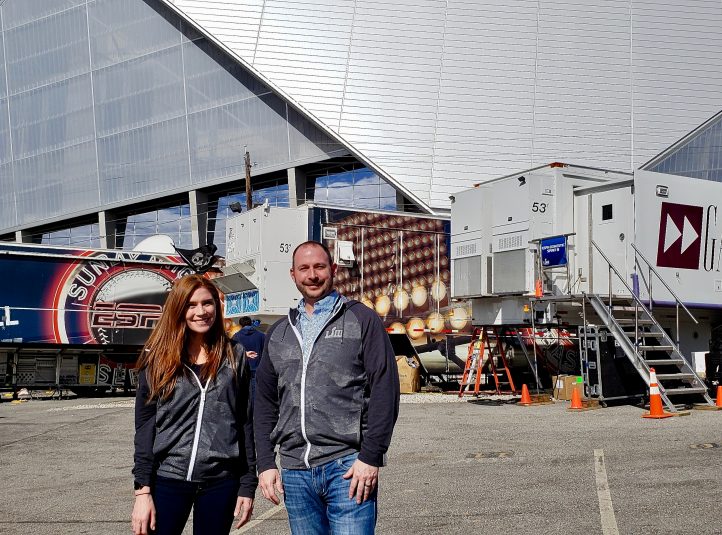 “They will do anything from a full show with their own cameras and trucks to just radio with commentary back to their host facility,” says Jeff Lombardi, senior director, international production, NFL.

Broadcasting the game with onsite crews are Australia, Brazil, Canada, China, Denmark, Germany, Hungary, Japan, Mexico, Sweden, and the UK, and Lombardi says there was interest from others to do more as well.

“We reached studio capacity early on, in October, and then people asked about wanting to expand and bring in a couple of cameras and do a studio show,” he explains. “Unfortunately, we had to turn them away or tweak their commentary space to use a Cueball camera rather than being able to do a two-camera shoot.”

Lombardi notes that interest from foreign rightsholders depends on everything from where the game is being played to the global economy. But also helping is what the NFL production team is doing with respect to things like fiber deployments that can get more signals to more locations.

“That brings our costs down so we can offer a better rate to the broadcast partners,” he says.

The vast majority of international viewers will be treated to a world feed built around the CBS clean feed. The NFL team has four cameras and isos for cutaways during commercial breaks or sponsored CBS elements. Joe Zucco will direct, and Brian Hennessey will serve as producer — roles  the two have embraced over the past few years.

“The CBS commercial breaks vary in timing, but we will make all of ours 90 seconds, and then our announcers, Bob Papa and Charles Davis, can vamp during those breaks. Broadcasters can use that as a guide track or use it in their broadcast.”

NHK is onsite producing the game from its NHK-K4 production unit, which has an Evertz router, a Sony MVS-8000X production switcher, and a Lawo audio console.

“NHK is always trying to push the envelope with things like 4K or even 8K,” says Lombardi. “Here, they will font their own graphics, and they are also looking to use specific camera angles.”

Televisa is another broadcaster that has stepped up its game. It is onsite with its own Televisa production unit as well as an uplink.

Says Lombardi, “Televisa is going to incorporate their own Phantom slo-mo camera [located] in the low-end-zone position into their broadcasts.”

“They’ve really expanded this year. They have brought in the announce crew for Monday Night Football for the ESPN Australia feed,” says Lombardi. “ESPN Brazil is doing a commentary show only; they will downlink the feed in Brazil. ESPN Latin America will font their own graphics from here.”

BBC, housed in the Gracie truck from Harb Production Services, will carry the CBS broadcast rather than the world feed.

“They have turned their announce booth into a makeshift studio where they will do the pregame, quarter breaks, and commercial breaks from onsite,” says Lombardi. “But, during the broadcast, BBC viewers will hear [CBS announcers] Jim Nantz and Tony Romo.”

“We have a really good team here,” says Lombardi. “Producing a unique Super Bowl world feed while servicing more than 25 international broadcast partners from the stadium is no small task. Having the right boots on the ground with such a hardworking team working towards a single goal is what makes all of it possible.”