It has been a busy week for NFL Media in both Atlanta, where Super Bowl LIII will be played this weekend, and Culver City, CA. In Atlanta, a team of more than 400 is covering every angle ahead of the game and working closely with a team of more than 250 people at NFL Media’s facilities in Culver City, where three control rooms have been producing all the coverage for programming from Tuesday to Saturday. And new this year, a fourth control room will be fired up on Sunday for the big game.

For the NFL team, each year provides its own set of challenges and opportunities because each host city is unique. Atlanta has arguably provided the most compact Super Bowl footprint in quite some time. 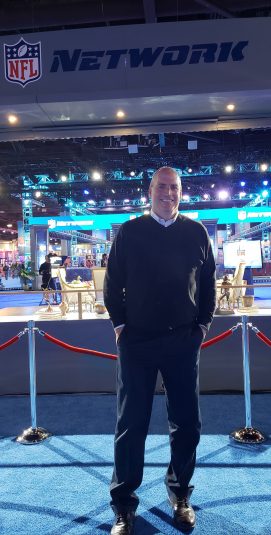 NFL Media’s Dave Shaw says the team in both Atlanta and Culver City, CA, has done a great job this week for Super Bowl LIII coverage.

“I can’t be prouder of our team,” says Dave Shaw, VP, production, NFL Media. “We developed a plan taking advantage of the unique, centrally located venues in Atlanta, with Opening Night at State Farm Arena, Super Bowl Live at Centennial Park, Super Bowl Experience at the Georgia World Congress Center, and Media Center at GWCC, all in close proximity to Mercedes-Benz Stadium.”

The close proximity gave Shaw and the team a chance to build a 25,000-sq.-ft. production hub within the GWCC. Bexel was tapped to supply and engineer a prebuilt system customized for NFL Media’s engineering core, transmission hub, and control room. The only standalone production is NFL Honors, with Game Creek’s Apollo supporting NFL Media’s coverage of the red-carpet show.

“The beautiful thing about Atlanta is [that] everything is so close, and having everything in the same vicinity allowed us to have a central hub for the operational and production teams,” says Shaw. “I don’t know when we’ll see something like this again.”

Adds AJ Wainwright, director of technical operations, NFL, “If there are any real issues, you are within a five- or 10-minute walk of each other, and we enjoy that. Conceptually, we’re thinking about Miami and next year.”

Coordination is key, especially with production facilities so far apart. Says Shaw, “[Director, Studio Operations,] Jessica Lee in Culver City oversees the studio operations and control rooms and is working with [VP, Broadcast Operations,] Leon Schweir on the trafficking of which show is done out of which control room. We want to use the exact control room they use all year, so they are comfortable.”

The team in Culver City is working closely with the team in Atlanta and makes sure the intercom system (a massive RTS Adam intercom with 880 ports) and all other signals get to the right location. When nasty weather hit Atlanta on Tuesday and production plans had to be adjusted for programs set to shoot in Centennial Park, for example, ensuring communication between the team in Culver City and the one in Atlanta was critical.

NFL Media studios and sets in Atlanta comprise a presence in Centennial Park; a two-way set on the floor of NFL Experience; a Total Access set; four positions in the Media Center for the linear network, digital, social, and original content; and a set along one of the primary thoroughfares the fans will take to reach the stadium.

“Capturing the feel of Atlanta was most evident in our set at Super Bowl Experience,” says Shaw. “[NFL Media Director, Media Operations,] Adam Acone has again led coordination of the overall production plan, including all set locations, with our set-design team led by Rick Qualliotine, Jennifer Love, and Carlos Aguero, along with Jesse Medeiros on scenic design.”

Filmwerks was tapped for set structure, intended to highlight the looks of Super Bowl Experience, Super Bowl Live in Centennial Park, Media Center Radio Row, and an outside set near Fan Plaza.

“At Opening Night,” says Shaw, “this team also built out great augmented-reality elements of player identification, team logos, and more with the overall feel of the dynamic stage set.”

Inside the stadium, there is a set on the field level as well as in Section 119, where a coaches show, a Twitter show, and a digital postgame show will be produced. And, on Monday morning, Good Morning Football will set up shop with the stadium as a backdrop.

The NFL is relying on one truck in Atlanta: Game Creek’s Nitro, which will be used for the production of the NFL Honors on Saturday night from the Fox Theater.

“We have a separate transmission from CenturyLink,” says Wainwright. “Then [the signal] goes to Culver City. It’s a simple three-mux production.”

Third Time Is the Charm for At-Home Production

This is the third year the team at the game has made use of the at-home approach to produce content. But it’s the first year that Bexel is involved, providing the equipment, integration, and technical support to keep the production-control room, audio area, EVS replay-playback area, and graphics area are online and operating properly. 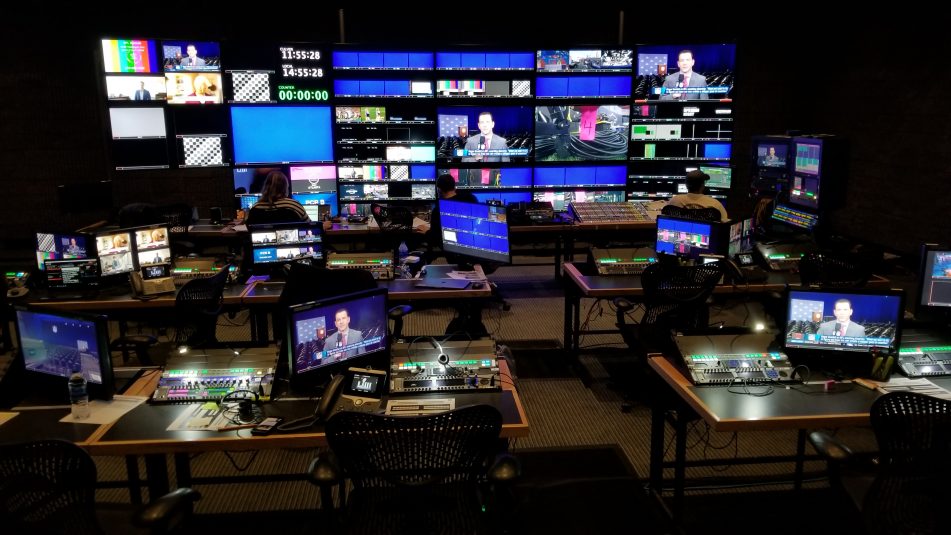 Bexel made use of furniture from NEP in building the NFL Media production-control room at Super Bowl LIII.

Shaw and the team put the contract for technical facilities out to bid this year, and part of the process included having the finalists construct a dummy of the facility in Los Angeles. That gave the NFL production and operations team a chance to see what the facility would look like and also make adjustments, such as adding a path down the middle of the production-control room, which will seat 15 people on Super Bowl Sunday.

Because Bexel is now part of NEP Group, its team was able to leverage the rest of the NEP team.

“NEP has matured very well as a company, and their engineering teams are talking to each other,” says Shaw. “They do a lot of flypacks and events like this, and they have a good reputation. They’ve done an amazing job. I felt secure because the NEP engineering team see the big picture, and that helped us in decision-making.”

For Bexel, it was a cross-Atlantic effort, with the NEP UK team the playing a role in providing the furniture, especially the desks, which Shaw says made a difference: “You can easily see the monitor wall but also the intercom panel. There are a lot of little things and details I like.”

The furniture was also much more shipping-friendly, notes Pastor, and much of it was used for Eurosport’s Olympics efforts and for Wimbledon’s new technical facilities, which debuted this past summer.

“You can fit five desks in a case the size you need for a monitor,” adds Pastor. “They are very compact as opposed to something that needs a crate for each one.”

The large footprint within the World Congress Center ballrooms provides space for 65 pieces of furniture and ample space for technical equipment and the ability to work with a bit more personal space than is typically found in a live-production environment.

“Having this footprint makes it a lot easier: you can plan for space,” says Pastor. “There are about 180 monitors just in these ballrooms with 90 multiviewers, 120 KP panels, and 65 pieces of technical furniture.” 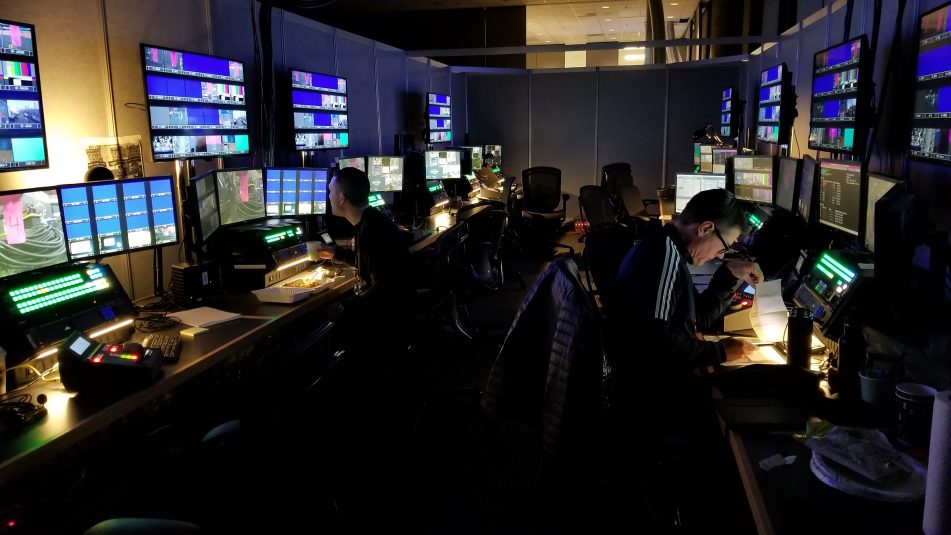 The technical specs were large as well and have been achieved with the help of a 1,000×1,000 Imagine IP3 router, which Pastor says has 30 multiviewer cards with 48 inputs and six outputs each. There is also a Grass Valley Kayenne production switcher with 9M/E and 128 inputs; a Calrec Apollo audio console with 96 faders alongside a Calrec Artemis 64-fader console; and two Vizrt graphics engines. The at-home–production rooms house two Calrec Apollo consoles with 40 faders.

There are also five eight-channel EVS system and two 12-channel EVS servers, as well as 880 intercom ports on three Adam matrixes tied to a fourth in Culver City.

“We’ve basically built a TV station that is supporting a network,” notes Reilly.

He adds that there are also 528 strands of fiber between the Atlanta sites, including 198 to the stadium and 96 to State Farm Arena.

The biggest challenge was simply to have all the production racks and furniture prebuilt and planned so that they could quickly be brought onsite and put together.

“We built it exactly the way they wanted it, knowing we would not have much time for changes once we were onsite,” says Pastor. “We wanted to get to the point where we were not reinventing the wheel but rather just making adjustments.”

One idea that helped ease operations was to build a truss in the main equipment room. Lancaster had built something similar for Wimbledon, and the truss at the World Congress Center sits between two rows of equipment and allows the cables to pass overhead.

“We didn’t want all the cables on the floor,” adds Pastor. “The truss keeps the cables out of the way and makes it easier for us to manage things and get to the back of the racks.” 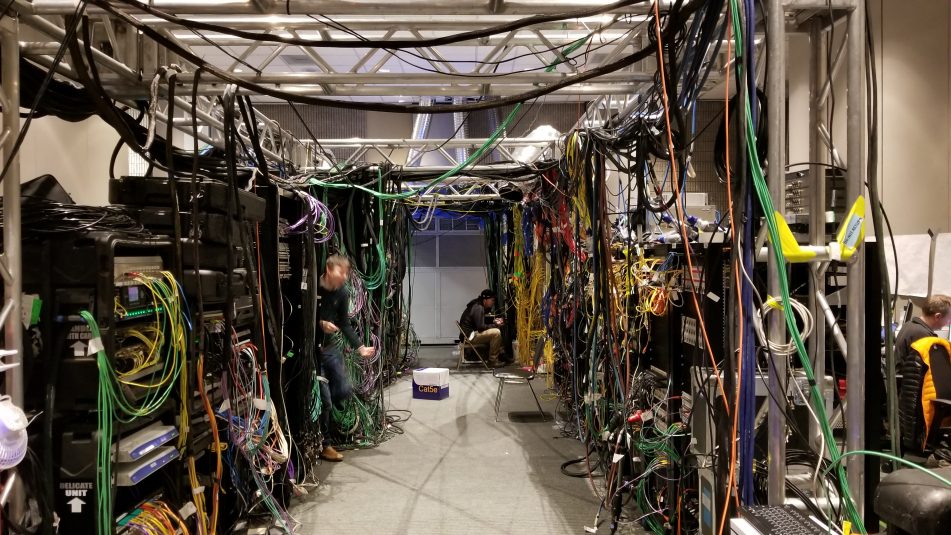 A truss in the NFL Media technical area makes it easier for staffers to access the back of units and minimizes trip hazards.

The truss and preplanning enabled the technical team to move in at 5 a.m. on Sunday, get the truss up by 7 a.m., power up by 8 a.m. and have eight trucks of equipment unloaded in one day.

“On Sunday, we got the walls up, then first installation on Monday morning, and, by Tuesday, a lot of it was framed,” says Shaw. “We were very impressed.”

The digital and social-media teams were also able to take advantage of the infrastructure.

“They were able to access the same infrastructure to support its unique programming from the various set locations, along with bandwidth for them to do their own encoding,” says Shaw.

“It has been smooth despite the complexities,” notes Shaw. “We have communicated better than any other Super Bowl between our NFL Media Production and digital teams, operations, engineering, production management, along with CBS coordination, the host committee, NFL events, NFL IT and NFL Films’ core group. We love this annual opportunity to showcase the Super Bowl, still the greatest single sports event every year.”