After a benchmark year in which the broadcasting duo of Sports Broadcasting Hall of Famer Joe Buck and his longtime partner in the booth, analyst Troy Aikman, made the leap to ESPN in the offseason, the broadcaster is embarking on its second-ever NFL Wild Card version of Monday Night Football with No. 5 Dallas Cowboys vs. No. 4 Tampa Bay Buccaneers at Raymond James Stadium (Monday, Jan. 16 at 8:15 p.m. ET). With plans to air on ESPN, simulcast on ABC and ESPN+, and supply the highly popular alternative ManningCast on ESPN2 and ESPN+, the production and operations crews look to benefit from the hard work done in the regular season.

“We’re always pushing the implementation of new technologies,” says Steve Carter, senior operations manager, ESPN. “The upgrades that were made to NEP’s EN1 in the offseason have allowed us to constantly demo new workflows and plan for the future.”

Before the start of the 2022-23 NFL slate, ESPN made major commitments to its production and operations infrastructure. Working alongside the expertise of NEP Group, the broadcaster gave the newly remodeled EN1 mobile unit a significant IP upgrade. Taking the enhancements to various venues throughout the country, director Jimmy Platt, producer Phil Dean, and the team at the front bench needed some time to get used to their new production environment. Over time, the entire crew saw improvements to behind-the-scenes workflows. 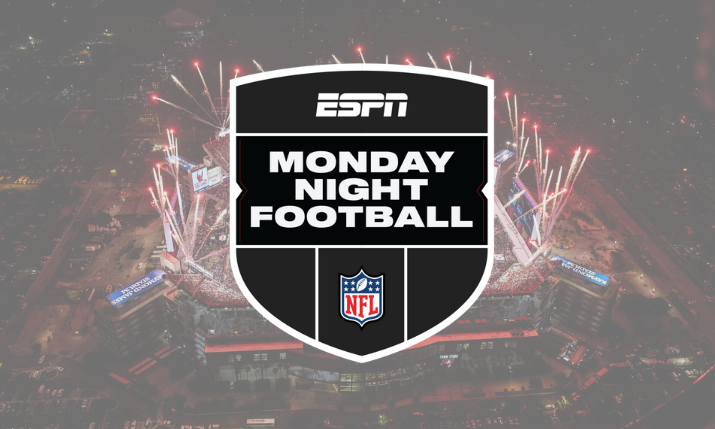 “We had to work through some of these new changes that came with the new infrastructure,” says Platt. “As we went through the season, we continued to build on it each week to get to a comfortable spot.”

For this playoff tilt in Tampa Bay, EN1 will once again be parked outside in the television compound. Aside from the mobile unit, NEP Group’s footprint is quite extensive throughout the live-broadcast complement. the company’s various divisions are providing essential equipment for the 59–camera show, which is being produced in 1080p HDR.

Operationally, ESPN is working with closely with Bexel. The fiber cable, fiber transport, and monitors will be similar to the regular-season setup for Monday Night Football. Also included will be fiber cable for all onsite studio shows (First Take, NFL Live, and Monday Night Countdown) and full support for ManningCast.

From an operational perspective, working with a reliable partner like NEP has relieved some of the stress that come with a massive playoff production.

“We always have a great working relationship with NEP, and that will certainly continue in Tampa Bay,” says Carter. “There are so many moving parts, but our jobs become a lot easier when we know that NEP is handling all of our technological needs for us.”

Away from the venue, ESPN’s robust REMI production model will be deployed for the season finale. One graphics operator, four EVS replay servers, and clock and score operation will be located at its headquarters facility in Bristol, CT. 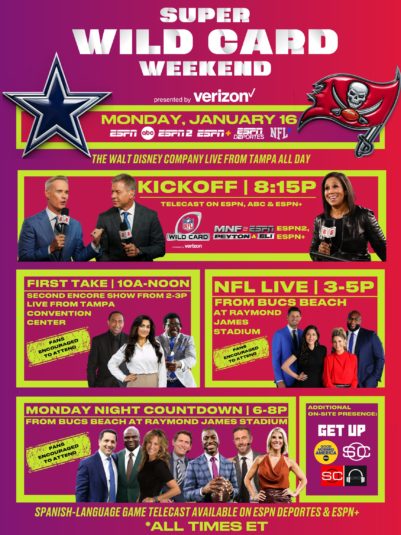 A look at the broadcaster’s full day of NFL programming on Monday, Jan. 16.

With the NFC-side of the NFL Playoffs not finalized before the final weekend of games, Carter and his team didn’t have a definitive answer of where they, and NEP EN1, would be going for their Wild Card broadcast. The uncertainty prevents the crew from setting up shop, but, with the final regular-season game being played on Saturday instead of Monday, preparing for Week 18 presented the operations team with a lot more challenges.

“We had more notification about [the location] for this playoff game than we did in Week 18,” adds Carter. “Granted we’re adding more gear [to this show], but this has been a little bit better to plan out.”

From a production standpoint, the on-air team needed time to prepare for the appropriate storylines. Not necessarily knowing which two teams would be playing in the Wild Card, the production crew operated on a shortened schedule once the matchup was announced.

“You can’t plan for storylines about a game that you don’t know about,” says Platt. “Instead of planning for a number of different games, we’ve worked on a short week. When we found out the matchup, we worked from there.”

Buck and Aikman have had a major impact on sports broadcasting, but this was the first time in two decades that they had to make a showing at a brand-new network. Forging a partnership at Fox Sports that has become the blueprint for live event coverage in the booth, Platt was overjoyed to work with one of, if not the best play-by-play team in the industry. The first regular season featuring the trio of Buck, Aikman, and renowned sideline reporter Lisa Salters was accentuated not only by the immediate chemistry between the three but also the way that they adapted after the sudden collapse of Buffalo Bills safety Damar Hamlin during the first quarter of the eventually cancelled Week 17 game between the Bills and Cincinnati Bengals.

“You prepare and plan for significant injuries but not necessarily for a tragic moment like that,” says Platt. “The thing that resonated the most with me was their empathy for the situation and the tone in which they spoke. Joe and I had a conversation afterwards, and he said, ‘If that’s someone that I love, how would I want that event to be covered?’ He had put a little bit of thought into this possible scenario in the hope of never having to use it. When he did need it, he went right into [the mindset] that he needed to have.”

Their response, and the “E to 3” microphone flag tribute seen during Jaguars-Titans in Jacksonville, FL, was a journalism master class. Those moments personified the upward trajectory that Buck and Aikman have injected into the MNF property. Overall, working with ESPN’s new commentary team has been a beneficial process.

“We’ve had a lot of discussions of not only how we can help them but how they can help [our production team],” says Platt. “There was an initial learning curve, but the approach that they have to their craft is the best in the business. We’re about to close the book on another season on Monday night, but I’m fired up to get to the offseason and get into some planning with them.”

In addition to the main broadcast team, ESPN will flood Raymond James Stadium and the surrounding Tampa Bay area with a bevy of talent and programming. For the Spanish-language call of the game, play-by-play announcer Eduardo Varela, analyst Pablo Viruega, and sideline reporter John Sutcliffe will call the action on ESPN Deportes and ESPN+. At Tampa Convention Center, Stephen A. Smith, Molly Qerim, Dallas Cowboys legend Michael Irvin, and multiple guests — including Aikman, Derrick Brooks, and Will Packer — will be live for two shows of First Take. Laura Rutledge, Mina Kimes, Dan Orlovsky, and Marcus Spears will also be live from the Bucs Beach section of the venue for an onsite edition of NFL Live. Leading up to the game, Monday Night Countdown will feature Suzy Kolber, Robert Griffin III, Booger McFarland, Alex Smith, Adam Schefter, and Steve Young from Bucs Beach before kickoff.

Sophomore Stride: ManningCast Gets Set To Enthrall Fans for Another Playoff Edition

During its first season, Monday Night Football With Peyton and Eli —colloquially known as the ManningCast — spent a lot of time breaking the norms that fans have become used to with linear coverage. As the Manning brothers served up real-time insights as former players and found their footing within a live-production environment, the positive reception pushed the network to launch other versions of alternative broadcasts, including KayRod with Michael Kay and Alex Rodriguez for Sunday Night Baseball. It has also taken the creation of ESPN’s MegaCast, the collection of offerings reserved for high-profile games like the College Football National Championship, to an entirely new level. Working in conjunction with Omaha Productions, the ManningCast garnered so much attention that the alternative broadcast received the 2022 Sports Emmy Award for Outstanding Live Series.

“The MegaCast has continued to evolve,” said Lee Fitting, SVP, production, ESPN, after receiving the award. “This was the next step in the evolution that has gained a lot of recognition. It has become a different way to watch a game on Monday Night Football.”

Throughout their second full season, the Mannings hit the ground running during their nine-game regular-season schedule. Bits and jokes were established, and guests like current players Josh Allen and Joe Burrow as well as comedian Kevin Hart and former President Barack Obama have given the show an extra dose of credibility. A mixture of antics and expert analysis is slated for Monday night’s showdown in Florida, and fans eager to watch the latest installment will be in for a treat.

“The most important element about Monday Night Football is the people,” says Platt. “No two weeks are ever the same. The crew’s willingness to adapt and change is what makes each show as great as they are.”

Prior to kickoff at 8:15 p.m. ET, Monday night’s coverage of the NFL Wild Card between the Dallas Cowboys and Tampa Bay Buccaneers will begin with NFL Live at 3-5 p.m. ET, followed by Monday Night Countdown at 6 p.m.