Fresh off its most-watched regular season of NFL coverage in seven years (average 18.487 million viewers), CBS Sports charges into the playoffs this weekend with a big game on the AFC side of the bracket. The broadcaster is in Buffalo for the second-seeded Bills’ matchup with the seventh-seeded Miami Dolphins (Sunday, 1 p.m. ET, CBS). 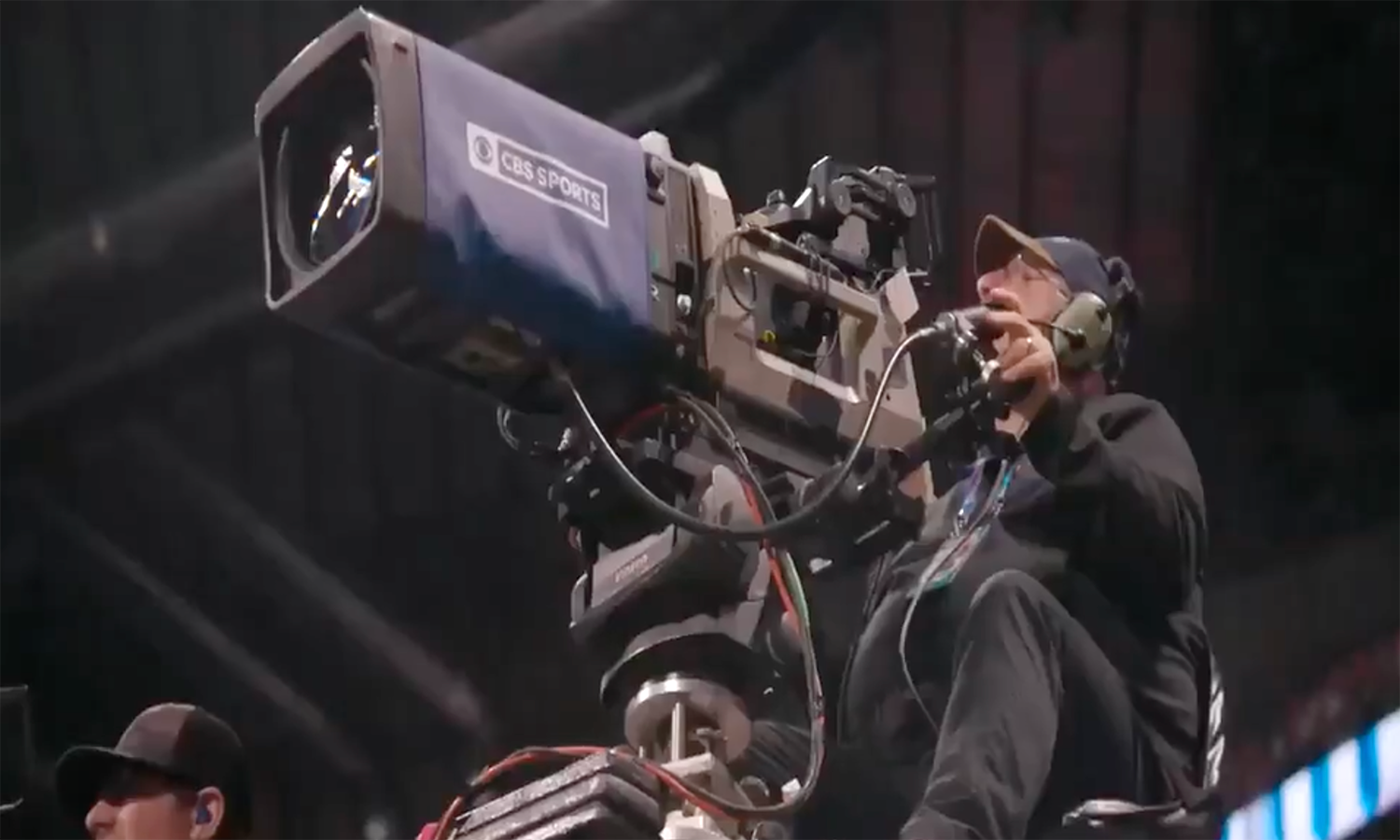 CBS Sports is planning to deploy more than 60 cameras for its coverage of the AFC Wild Card game between the Miami Dolphins and Buffalo Bills on Sunday. CBS Sports will also carry an AFC Division Round Game next weekend and the AFC Championship Game on January 29. (Photo: CBS Sports)

It’s the lone game of the weekend for the team at CBS, which is focused on filling up Highmark Stadium with more than 60 cameras — including a Skycam and multiple Pylon Cams — as well as its signature enhancements, such as the Sports Emmy-winning RomoVision.

“I think we’ve done a really good job over the last couple of years of building up our weekly regular-season game to the point where it resembled very significantly what a Wild Card game used to look like,” says Jason Cohen, VP, remote technical operations, CBS Sports. “When we now go from Week 18 to the Wild Card, it’s almost an extension of the regular season. We add facilities, cameras, technology enhancements, replay servers, and so on to the Wild Card, and then we keep on building up through the Divisional [Round] and on the [AFC] Championship [Game]. Every round escalates a little bit more, yes, but now the leap from the regular season to the Wild Card is by no means great.

“It allows us to add to the show without completely disrupting a lot of the muscle memories that build throughout the season,” he continues. “Technology additions become just a little extra for situational value. It’s not a landmark shift where they have to rethink how they’re producing the show.”

Each week, the show will grow in size during this NFL Playoff season. One notable addition on the broadcaster’s to-be-determined Divisional Round game next week is the return of Trolly Cam, the point-to-point cabled aerial camera system provided by Flycam. Trolly Cam’s run extends a few rows back over the seats on the near sideline and can zip along at speeds of up to 65 mph. The system offers a unique look that debuted in CBS Sports’ NFL Playoff coverage in 2021. 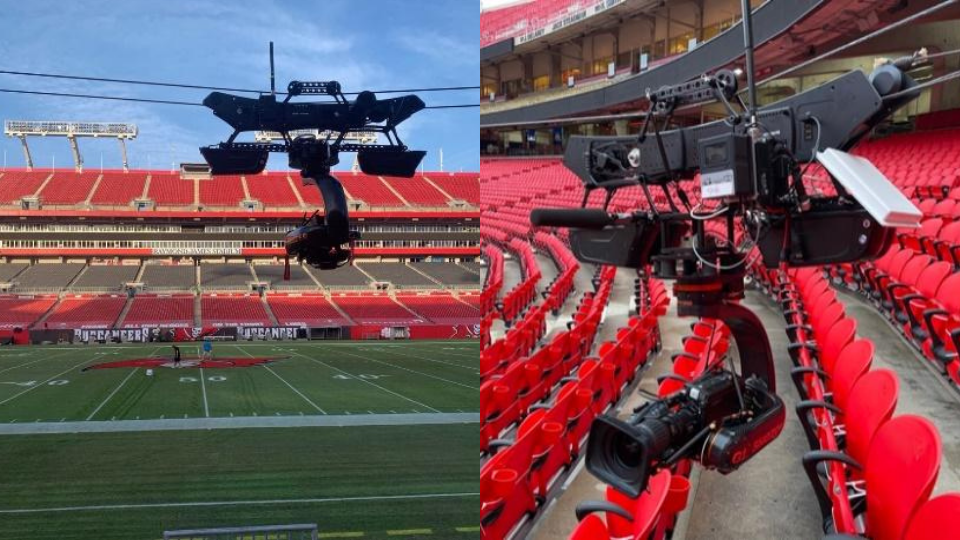 CBS Sports’ Trolly Cam, a point-to-point cabled aerial camera provided by FlyCam, returns for its third season of NFL Playoff coverage. The system will make its first appearance in the Divisional Round. (Photo: CBS Sports)

There are plans for drone coverage at CBS’s games. Depending on the venue, it could be ENG-based or live with help from the team at Beverly Hills Aerials.

Also starting with the Division Round next week, CBS will deploy Fujinon’s new HZK25-1000mm lens. The native–PL-mount lens was introduced in the U.S. last month and has since worked some of its first events, including a regular-season NFL game on CBS, a Monday Night Football game, and the CFP National Championship for ESPN.

“We will play with different possible capacities for that lens to be a part of our broadcast,” says Cohen, “whether it’s shooting field-level or much of what ESPN did in a high–end-zone capacity. We want to integrate that lens since it is some of the latest and greatest lens technology.”

“ONE OF THE GREAT THROWS YOU’LL SEE ALL YEAR!!”@tonyromo HYPED UP by this elite Josh Allen x Stefon Diggs TD 🙌

Game resources will be beefed up through the month, with more super-slo-mos, EVS machines, and even Sony servers (4K zoom and extraction) to support the four Sony 4800’s slated to be deployed at the AFC Championship Game.

NEP Supershooter CBS (A, B, C, and D units) — the A-game truck during the regular season — will be onsite in Buffalo and travel to each game that CBS will produce this playoff season. CES Power is providing the generators to support each compound throughout the month; it has provided the network’s redundant power for the entire 2022 campaign.

CBS will expand its compound for the AFC Championship Game with F&F Productions GTX 20 A and B units joining the party to support onsite pre/postgame and halftime studio shows. Game Creek Video’s Office 1 truck will also be added to serve as the primary QC facility.

CBS Sports’ top NFL game each week is produced by Jim Rikhoff and directed by Mike Arnold. CBS Sports won the Sports Emmy last year for Outstanding Playoff Coverage for its coverage of last year’s insane Divisional Round game between the Bills and Chiefs in Kansas City.

Where the AFC Championship Game will be hosted has been a popular topic of conversation the past couple of weeks. The league announced on Thursday that, if the AFC Championship Game were to pit the top-seed Kansas City Chiefs against the second-seed Bills, the game would be played at Mercedes-Benz Stadium in Atlanta. The uncertainty, of course, is due to the cancellation of the Bills’ game against the Cincinnati Bengals on Jan. 2, after Buffalo‘s Damar Hamlin suffered cardiac arrest on the field. The cancellation leaves the Bills with one fewer game played than the Chiefs, disrupting a fair seeding of the teams for home-field advantage. Last week, the league office approved a resolution to “mitigate potential competitive inequities.”

Cohen says the possibility of a neutral-site game poses virtually no challenge to CBS since broadcasters are typically in a week-to-week travel mode at this point in the season. Plus, CBS has plenty of experience broadcasting college and NFL games out of the 5½-year-old venue, including the SEC Championship Game each December and Super Bowl LIII, which CBS broadcast from there in February 2019.

As for the journey to the AFC Championship Game, CBS Sports does enjoy the “luxury” this season of having to produce just one game in each playoff weekend. The effort is spearheaded by Cohen and CBS Sports EVP, Operations and Engineering, Patty Power. Cohen oversees remote technical operations with Jenna McKeon and Adam Stouter, as well as Technical Managers Pete Kallander and Sarah Hammond. Engineering and planning is led by VP, Engineering and Technology, Mike Francis, along with Evelyn Jackson, Craig Stevens, and Jeff Millet.

While there’s always a desire to do more, Cohen says, his production and operations groups are motivated to put their full focus on a single production each week.

“I think we’ve proven over the years that, whether we have an A and a B game or we have a game with Nickelodeon, we know how to allocate proper resources and bandwidth to each of our playoff games to make it special,” he says. “With the storylines that we have right now that the production team is zeroed in on, we are ready to tell the proper stories following the Buffalo story and the possible neutral-site game. There’s so much going on with this particular postseason that it’s good to just be able to follow those stories and give the right share of coverage.”

The NFL on CBS kicks off its NFL postseason on Super Wild Card Weekend when the Buffalo Bills host the Miami Dolphins on Sunday at 1:00 p.m. ET.