Tokyo 2020 marks the 17th Olympic Games delivered to the U.S. by NBC Sports. It’s a legacy that stretches back to 1964, when NBC televised the Summer Games from, you guessed it, Tokyo.

In keeping with the broadcaster’s long history of innovation, this summer marks the Olympics debut for a key, growing piece of the NBCUniversal ecosystem: Peacock. 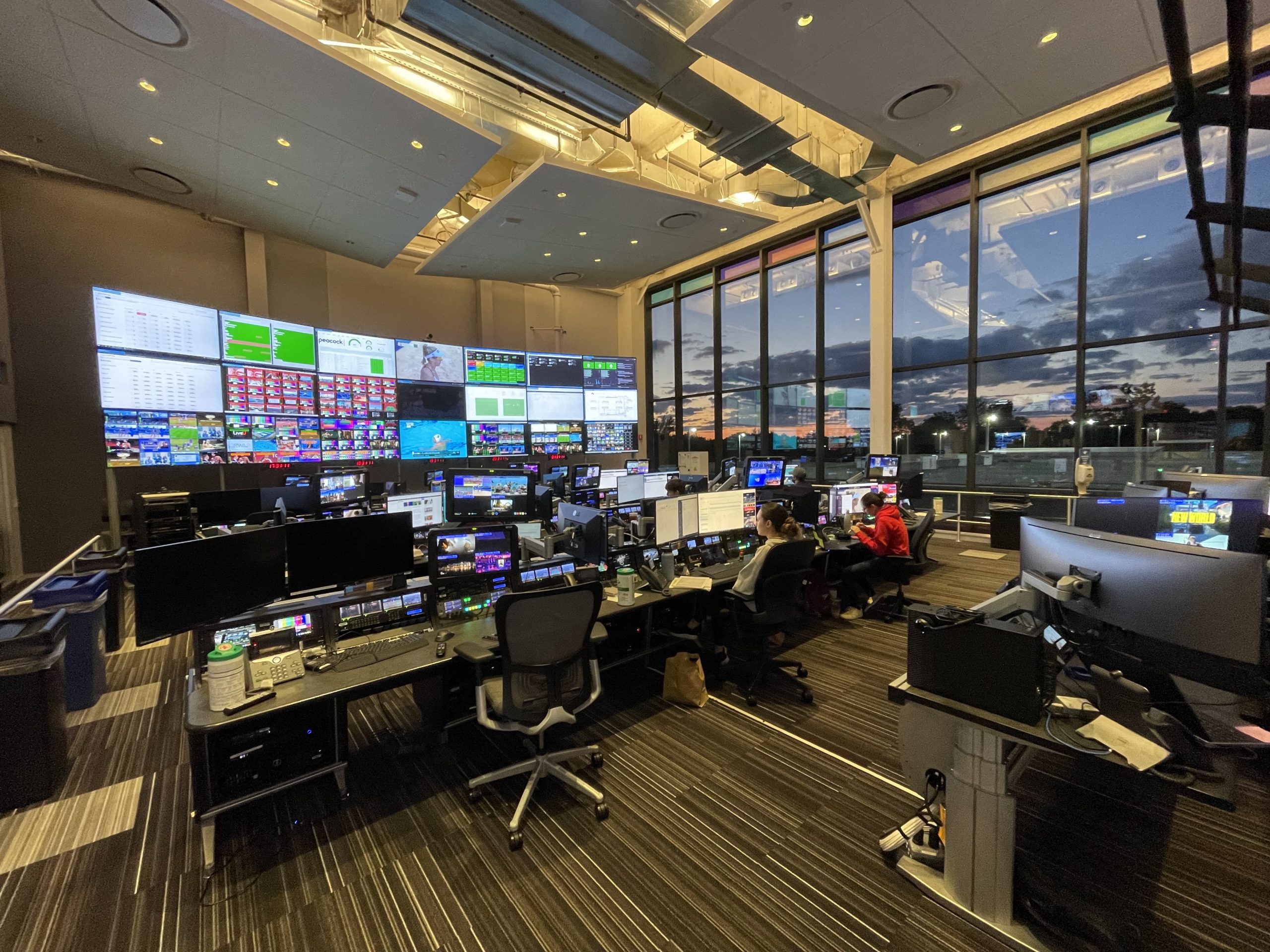 To support the monitoring of a girth of live streams funneling into NBCUniversal
s new over-the-top streaming service, Peacock, NBC Sports has erected a digital network operations center In the lobby of its Stamford facility.

In addition, the Peacock team has spun up new offerings on the app: Tokyo NOW, a channel hosting four original live studio shows (Tokyo LIVE, Tokyo Gold, On Her Turf at the Olympics, and Tokyo Tonight), various live event coverage, highlights, interviews, and more. The app’s interface has been tweaked to display Olympics content in the general menu bar on the home screen.

To support this breadth of live and VOD streaming content, NBC Sports has transformed the lobby of its Stamford, CT, broadcast facility, essentially dropping a pop-up broadcast-operations center in its heart.

The Peacock team needed a network-operations center so that technicians, producers, and others could keep tabs on the quality of the live streams being delivered to a long list of devices, including iPhones, Roku, Amazon Fire TV, and countless versions of Smart TV apps. NBC Sports’ engineering team obliged.

“With the [launch of] Peacock, our digital footprint here just exploded,” says Tim Canary, NBC Sports, VP, engineering. “It needed a proper monitoring center with router outputs and inputs and monitor walls. We looked at a bunch of spots in the building to put that. We ripped out a lot of desks and seats and a big mural on the wall and built what is now the Digital Network Operations Center for Peacock as well as for our live-stream management.” 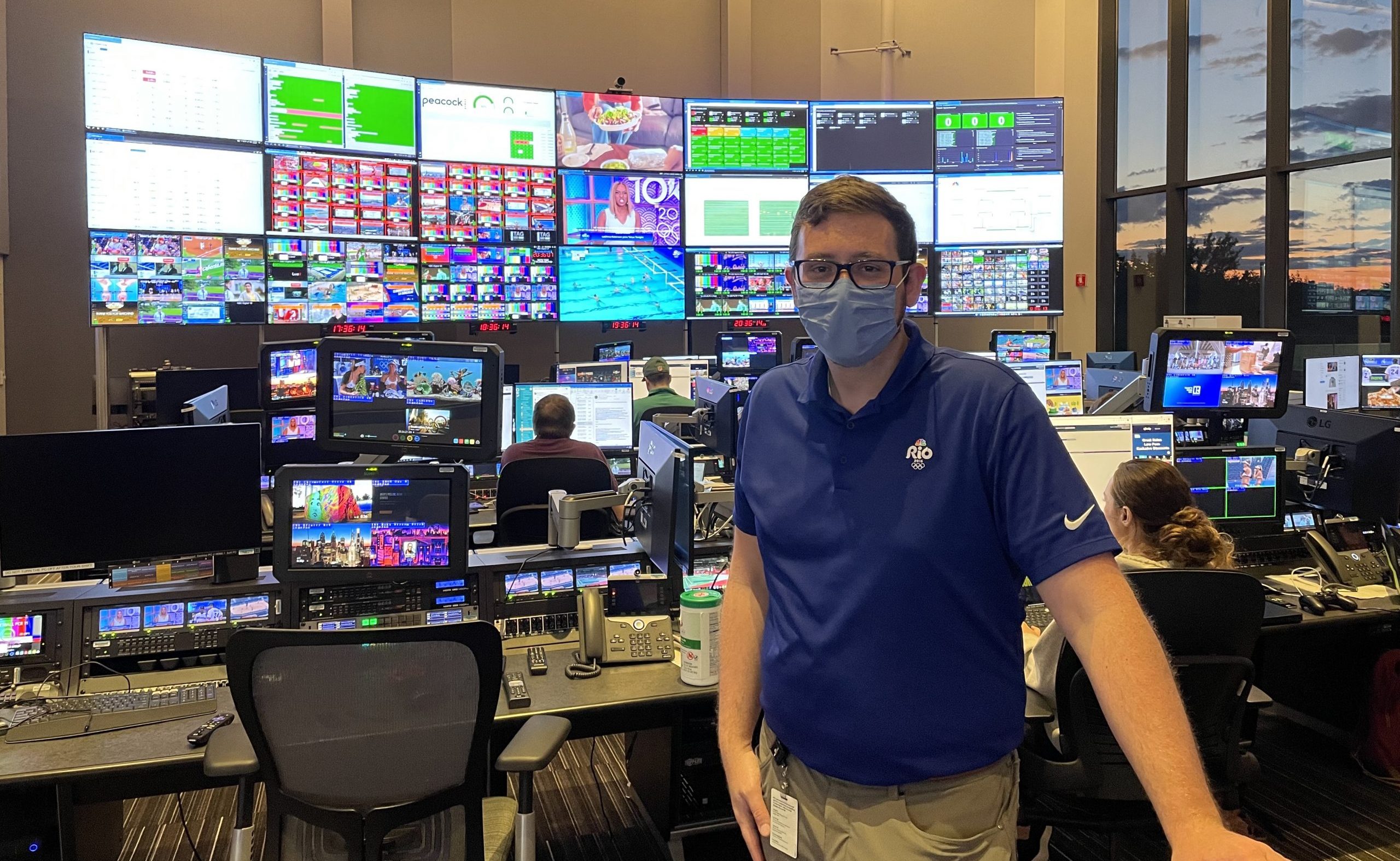 “We’re really pleased with how it has gone so far,” says Jarrett Frazier, NBCUniversal Media, director, system engineering and reliability, Peacock. “We’re ready, and we’ve got people even in this overflow seating just because of the number of concurrent events. There’s a lot of people focused on the digital aspects of it. Having this facility and the ability to monitor things in a much more proactive and proper way has been truly helpful for Peacock as well as for our live streams.”

NBC Olympics announced prior to the start of the Olympics that it has partnered with TAG Video Systems on OTT monitoring and multiviewing for production of the Games. TAG is providing an integrated software-based IP probing, monitoring, and multiviewer solution to monitor MPEG transport streams originating in Tokyo. The streams are logged, categorized, and archived at NBC Sports’ broadcast center in Stamford, CT.

There were some sound challenges in the overall design of the space, leading the design team to encase the network-operations center in glass. To ensure that an active newsroom-update location in the lobby was not affected by the new facility, NBC brought in an acoustical consultant, who recommended an angled glass enclosure and walls lined with 2-in. thick SOUNDSOAK walls to deaden the room.

“It is amazing how well this worked,” says Canary. “Once the carpet and everything else was down, it really became a quiet space.”

The space was being worked on early in 2020 before the COVID-19 outbreak forced everyone at the Stamford facility to begin working from home. In the first weeks of the shutdown, the space was missing most of the back wall. When Frazier’s engineering team was able to get back into the building safely, work resumed on finishing the structure.

“It’s certainly nice to have everyone here now,” says Frazier. “It makes a big difference compared with working remotely.”