Events like the Olympics have always given CBC a chance to bring together its Montreal team, which serves French-speaking Canadians, and its Toronto team, which serves English-speaking viewers. The pandemic may have reduced the number of personnel onsite in Tokyo to 140, but it hasn’t dampened the spirit. 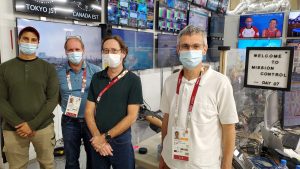 “We have crews coming from Montreal, Toronto, and all across Canada when the Olympics come, and we become one family. That is what we’re seeing,” says Francois Messier, CBC/Radio-Canada team leader. “There is a feeling of collaboration between the teams, and it’s amazing. It’s really a feeling of family.”

He notes that the team in Tokyo consists primarily of reporters, who are in the mixed zones, and personnel to support commentary from the aquatics and athletics venues. CBC News is also being supported.

According to CBC Systems Technologist Sanjay Rana, two 10-Gbps circuits are used to send a multiviewer of all the available OBS feeds to Montreal and Toronto. The team there selects the 20 feeds to send over the Zayo network in JPEG 2000 at 120 Mbps.

Two main broadcast-control rooms in Montreal and Toronto are involved, and the broadcast alternates from one control room to the other between the different programs as part of a COVID protocol.

Viewers back home are getting 23 hours of Olympic content a day on the main networks; subchannels feature long-form events like tennis, soccer, and golf. Bell and Rogers are getting content out to viewers via TSN 1 and 2 and Sportsnet, and a distribution deal with Amazon serves the OTT market.

“We were supposed to have two studios here, but it was decided to keep those in Canada,” says Messier. “Our main hosts are back home, but we have a green-screen studio here for athlete interviews. That is a cheaper way than Discovery, but it’s our version of the Cube.”

Also, in Tokyo are 16 LiveU units: 12 for the ENG crews, three for news, and one installed with Team Canada in the athlete’s village. According to CBC Technical Producer Sylvain Archambault, a camera, LiveU, and a robocam with a mic stand give athletes a chance to step up and take part in interviews.

One interesting aspect of CBC’s operations is that, in early 2020, the French-language team in Montreal moved into a new building that uses ST 2110 IP for signal transport. The English-language broadcast center in Toronto, however, is still HD-SDI. Sylvain Taillefer, CBC, technical engineer, says ST 2110 is used for audio in the voiceover booths but the rest of the facility is in SDI.

Technical Producer Dave Allmark also played a role in the efforts. “As long as we stay 1080i,” he says, “HD-SDI is fine.”

With the Beijing Olympics only six months away, much of CBC’s future innovation will be seen at the 2024 Summer Games in Paris. For now, the focus is on getting through the Tokyo Games safely while serving sports fans in Canada.

“This is my fourth Olympics,” notes Rana. “We’ve had some changes in the team, but we are always working towards the same goal. It’s fun to do that every two years.”

Or as is the case this year, every six months.