Olympics competitions are all about records on the field and the rights holders like NBC Olympics are doing their best to set some records as well. Take the transmission paths that NBC Olympics has deployed to connect Tokyo to the U.S. 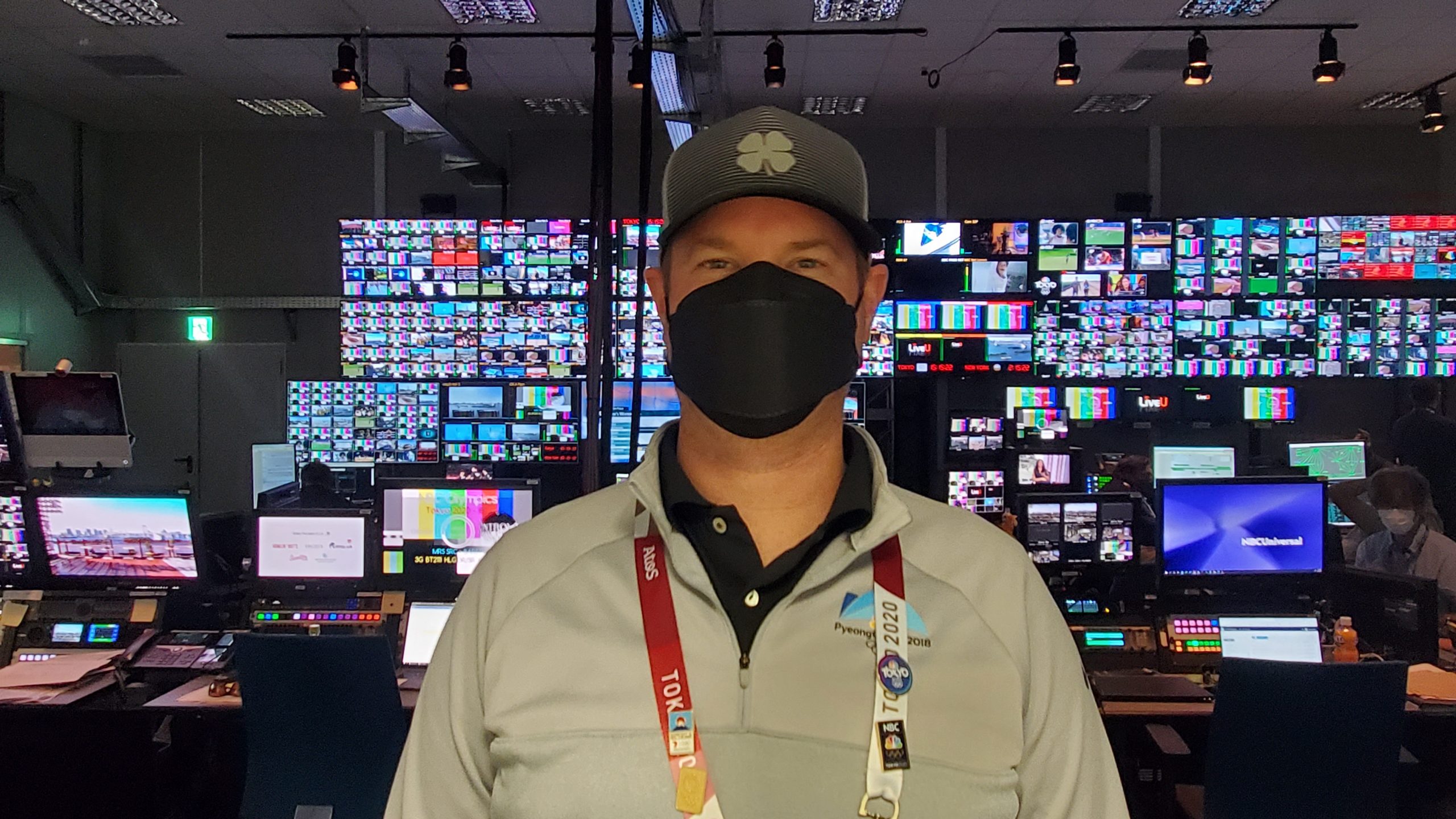 “We have 80 Gbps of connectivity between here and the U.S.,” says Chris Connolly, NBC Olympics, VP of transmission, engineering, and operations. “We have 221 feeds going to the U.S. and 101 coming back, giving us a total of 321 feeds. And that doesn’t include all the file transfer and other things that are being done by edit and EVS.”

Feeds are compressed with J2K and there is also some Haivision MPEG compression for return feeds that need less latency. The 101 return circuits are used for reverse off tubes which are calls happening in Stamford in VO booths that return to Tokyo and scenic needs for all the sets and studio.

“There are also return feeds from the venues like camera returns and high-speed feeds,” adds Connolly. “So, there is a whole variety of different feeds coming into the IBC.”

Planning for a transmission plan that involved such a large number of signals began with the basics while also being as flexible as possible given the COVID situation and its impact on production teams working remotely,

“As changes continued to happen and things were very much in flux and up in the air we just had to adjust,” adds Connolly. “But we have some key people within our engineering organization that have put a lot of effort into providing a lot of detail to all the different groups. There was a lot of prep that went into making sure everybody knew what they were supposed to do.”

Helping in those efforts were three key partners: AT&T who handled the connectivity and circuits; Media Links who provided the equipment that managed the signals on the AT&T circuits; and then LiveU.

“LiveU has been huge for us as the cell connectivity in this country is amazing,” says Connolly. “We did a 1080p HDR live 20 Mbps video for the opening of primetime and it was all done on LiveU. We had no hits, great quality video, and the Steadicam operator wore the return video backpack.”

Quality control is an important part of the workflow, and it is done in both Tokyo and Stamford.

“We have an operation here in Tokyo that does QC for anything that goes into primetime and then anything that goes to cable actually gets QCed in Stamford,” says Connolly. “It’s a partnership between the two groups so that when things might be hitting both of us at the same time, we can make sure that things look right here and look there. And then if it comes back through here, we make sure all the transitions of LUTs and video content is done the right way. So, it’s a big partnership between Tokyo and Stamford.” 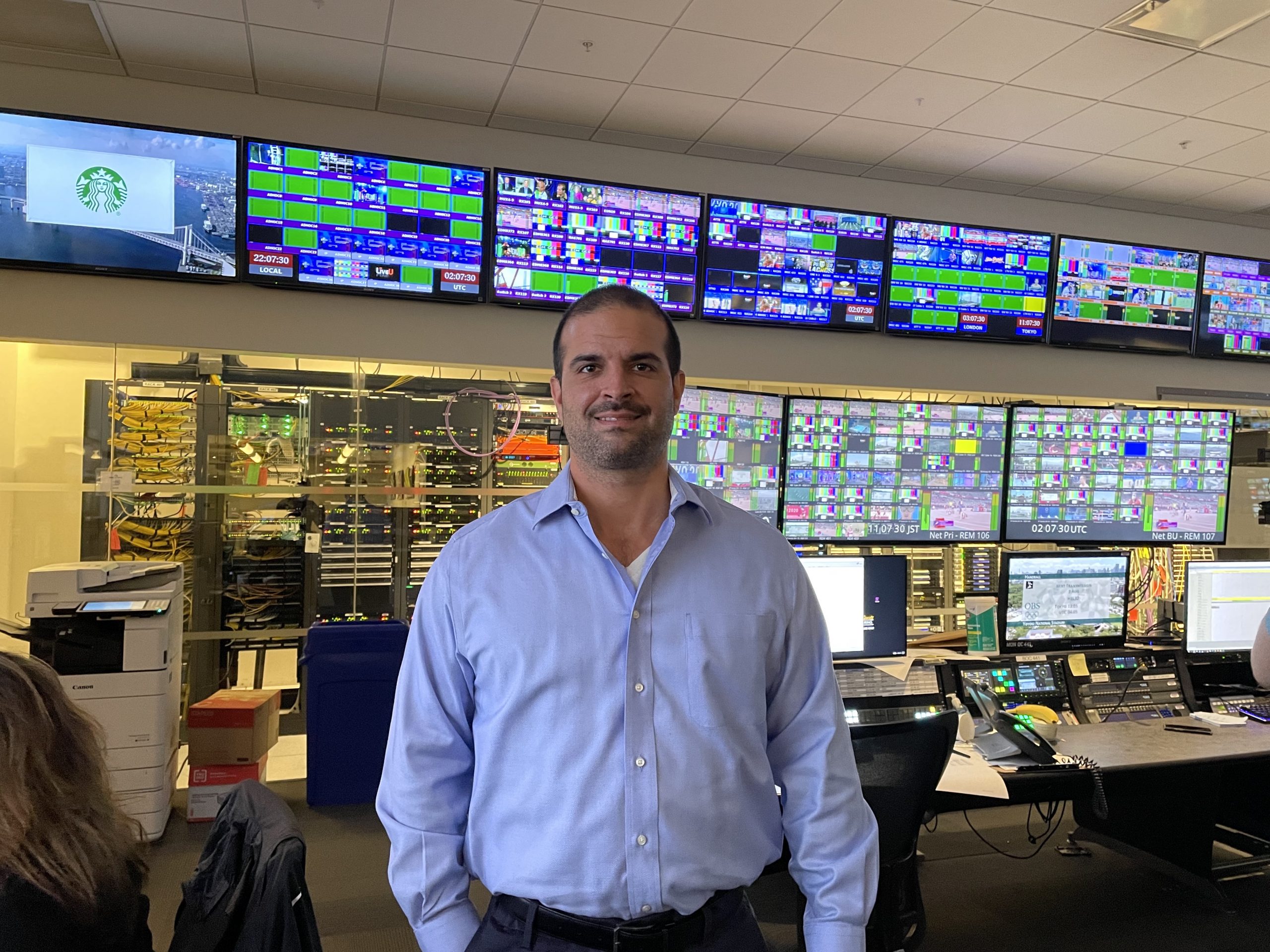 Stateside in Stamford, NBC has rolled an equally large and sophisticated operation in its Broadcast Operations Center. For the first time, NBC has deployed a third AT&T/Media Links transmission frame (in addition to existing frames at the IBC and Stamford) to support the mobile units in Stamford covering basketball, beach volleyball, and golf (as well as a swing/backup truck). Golf unilateral signals, for example, are sent straight to that third frame on the truck dock.

“The key is all the J2K [paths] we have going back and forth, which allow us to do the off tube commentary here in Stamford for events happening in Tokyo with very little latency,” says Eric Poellot, Manager, Transmission Engineering & Operations at NBC Sports Group. “Even if we have one talent in country and one talent in Stamford they’re able to collaborate and call the same feed with very little or no delay. We are able to do that thanks to AT&T, Media Links and those 10 Gbps connections.”

With more content than ever coming into Stamford this year and the live-streaming effort larger than ever, NBC opted to also install a new IPTV system. The system allows the team in Stamford to closely monitor the output of the AWS Elemental encoders it uses to send feeds to iStreamPlanet’s facility in Las Vegas for live streaming.

“The IPTV system that we had spun up over here has been an absolute lifesaver for us, because we were able to pretty nimbly add more streams and feeds and still be able to view everything on IP TV,” says Poellot. “The people in the Highlights Factory can just tune that up right on their box and they can see exactly what’s coming in and going out. That makes it a lot easier for them to produce their pieces for Peacock and Digital.”

With respect to key learnings Connolly says that making sure the plan was in place to not only meet production’s needs but also be flexible enough to meet needs they didn’t even know they needed yet is key.

“Overall, what we’ve planned for has been executed quite well,” says Connolly. “It’s just making sure we plan for volume.”

Helping in that, he says, will be JPEG-XS compression as it will help meet the need for those working remotely to get access to the content they want faster.

“I think JPEG-XS will play a big role as we move forward and we’re starting to think about the for Beijing,” he says. “And I think in Paris we will have quite a bit of that.”