OBS puts a lot of energy and time into digital fan engagement offerings so what happens when the fans aren’t in the stands supporting their nation, and cheering on their friends and family? For OBS it meant filling the gap with a new type of digital experience, one that not only can get virtual fans into the venues but also connect athletes with their friends and families immediately following a competition. Oh, and OBS had to do it quickly. 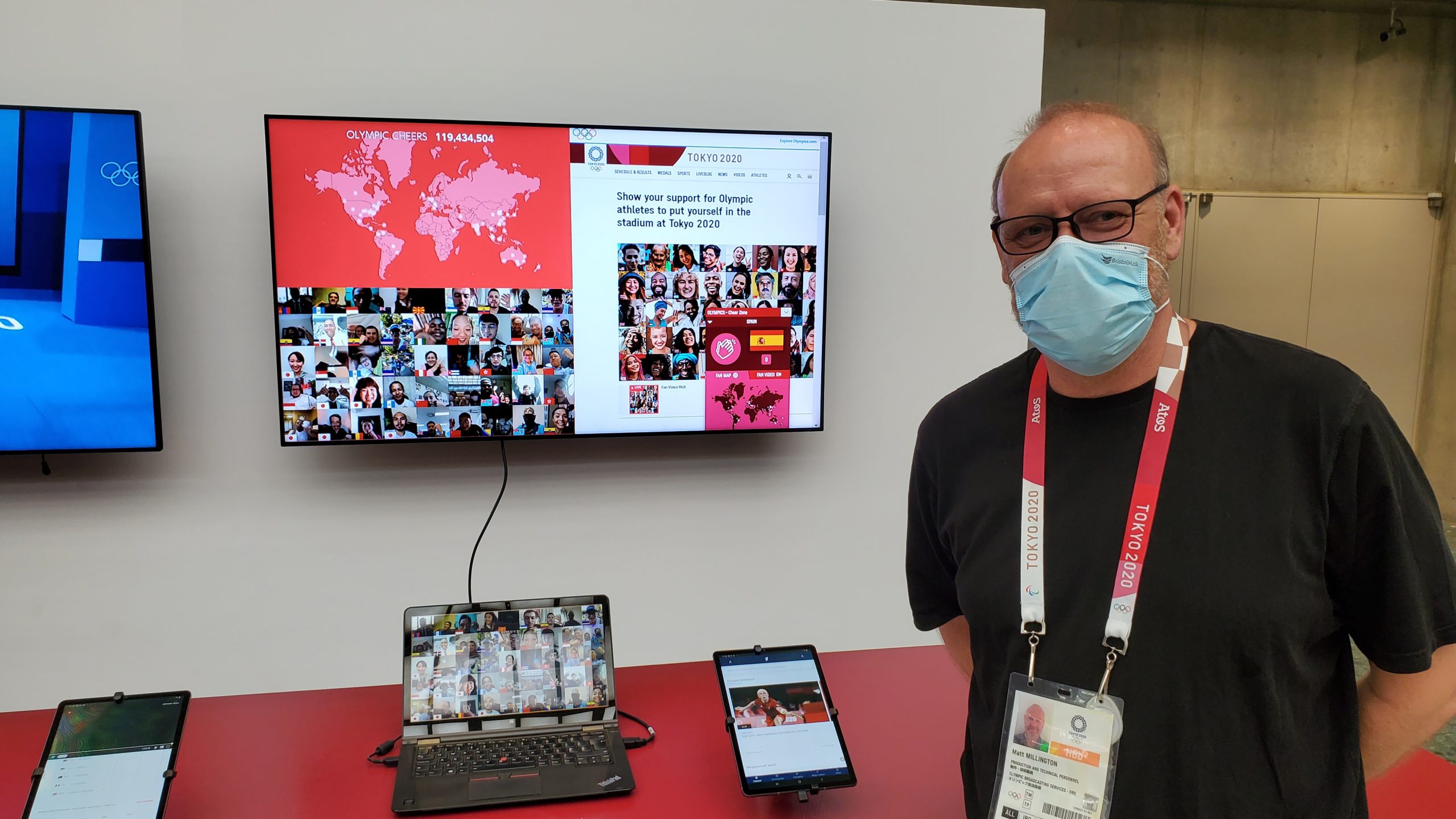 Matt Millington and the OBS digital team have worked hard to connect athletes with family and friends.

“It was a very late project that we basically started working on about four months ago when the announcement was made that international fans would not be allowed into the venues,” says Matt Millington, OBS, director of digital content production. “So, we started working on three products, two of them are geared towards the fans and one is geared towards the athletes.”

The two fan experiences are the Cheer Map and the Fan Video Wall.

“They are widgets that can be integrated on any right holder’s page or any other partner like federations and national Olympic committees,” says Millington. “Cheer Map is a widget that allows fans to cheer for their country of choice and while it does default to where the IP is address is based, they can choose another country.”

Once in the widget, fans can virtually clap for their favorite nation’s athletes.

“We have a heat map of the world where you can see bubbles of support for different nations,” says Millington. “Interestingly, we’re getting a lot of traffic from India, a lot from Japan, obviously lot from Australia and we credit that to the time zone. But we have 205 countries or national Olympic committees and all of them have had cheers.”

As of July 30, more than 120 million fans had cheered and some also upload a selfie video from their phone or their laptop. Those videos are being placed into a video matrix with 45 fans and those videos are then played out on the big screens at all the venues and made available to rights holders.

“It allows fans to virtually be there and the sports presentation teams who control the video scoreboards can utilize both the map and the video,” adds Millington.

The big addition, however, is the Athlete Moment as it connects athletes with family and friends via video immediately after their competition. 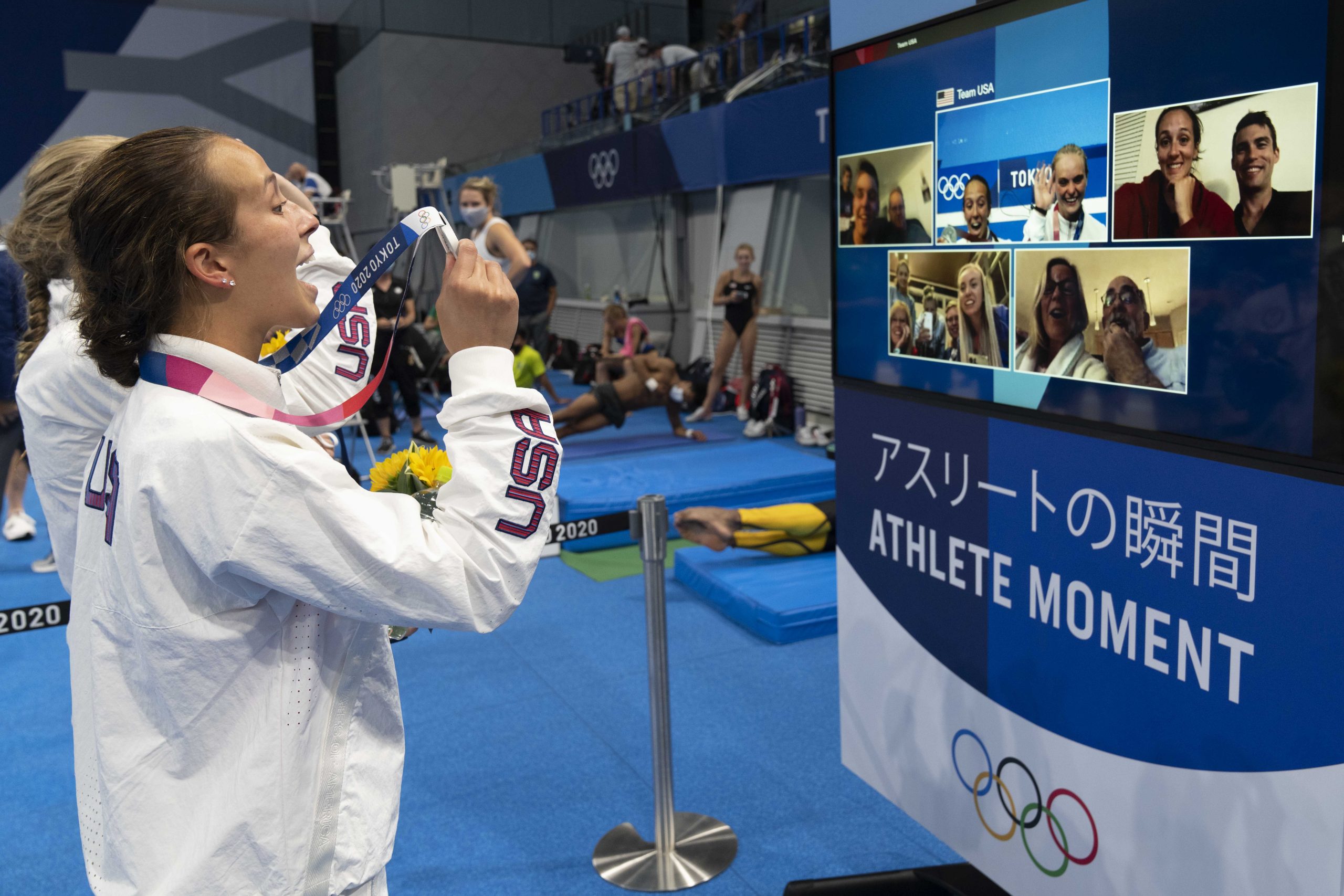 Athletes can celebrate their achievements with friends and family via the OBS Athlete Moment setup. © 2021 Olympic Broadcasting Services / Owen Hammon

“It’s been my favorite part of the project,” says Millington. “We’ve set up Athlete Moment viewing stations in selected venues, and we positioned it in a good place right before the mixed zone so it’s right in their path.”

Millington says there have been some fantastic moments, with the best usually involving a family gathered in a room having a watch party.

“It’s not the first time that this has been done but definitely the first time at this scale,” he says. “We have an operations center in Belgium, with a large team who are connecting with families prior to and during the event. And then we link them to the athlete.”

Key is making it simple for families at home to use. An athlete signs up to be part of the progam and gets a link that they then share with family and friends.

“The family and friends click on that link and are connected to the team in Belgium who tells them what is going to happen and about things like delay,” he says.

It also appears to be one of those things born of the pandemic that will stick around.

“We think it’s here to stay and we haven’t been able to cover every venue and every sport but, in the future, that would be our real goal: to cover every sport. But there are some challenges like team sports with 11 or more members. How do you manage that with the time allowed? But we’ve learned a lot in the last two weeks about how to make the workflow better and what technology works best.”

Even the virtual fans could be a keeper.

“Clearly the audience within a venue is tiny compared to the worldwide audiences watching on television,” says Millington. “We’d like to see the technology progress to allow people to not only upload a video, but for us to be able to point to that video so they can get a link some minutes later to the video they are in.”

Improvements to the Olympic Video Player

Since the PyeongChang Games in 2018 the OVP has undergone a redesign to not only make it cleaner but to also make the full app available as widgets and modules. Widgets include live sports results, the medals table, the schedule, athlete profiles, and video highlights or interviews. Live video is also available.

“We decided to split the OVP into widgets and we’ve seen huge uptake in those widgets or modules,” says Millington. “Rights holders can take the live results, the medal count table or schedule as individual widgets. In fact, those three are the most popular as it is an easy way to integrate all the data. For a single rights holder to try and take on the onus of stats is very impractical.”

On top of that OBS also offer a simpler version in the I-frame that is slightly less customizable and is in use by more than 80 national Olympic committees and international federations.

VR also continues to be a part of the OBS deliverables, and the sports covered in VR for these games include beach volleyball, basketball, athletics, gymnastics, boxing, and the ceremonies.

“We went for sports where we could get pretty close to the action,” says Millington. “VR doesn’t really work very well on some of the larger venues like football where you’re a bit too far away from the actual field for a large amount of time. And then we have crews doing short pieces for all the other sports and that’s where we do a lot of the POVs with things like cameras on BMX, mountain bike, canoeing or rowing.”

The biggest news on the VR front has less to do with the consumer experience and more with leveraging it to help solve a problem for broadcasters: getting a great venue image for a virtual studio backdrop. The images from the high VR cameras that provide an overall view of the venue are solving that issue.

“Rights holders can bring that back to their home base and make it look as if their announcers are in a VIP box,” says Millington. “It’s actually very good and really effective and that will be seeing more progress in the Beijing Games [next February] where it will be in all venues. It’s not a difficult thing to do as it’s just a single fixed camera feed straight from the venue.”

VR will also make the move to 8K acquisition in Beijing, something Millington says will make the viewing experience much better.

“When you see 8K in VR, it’s distinctly different and you don’t need to be a visual expert to see a massive improvement,” says Millington. “So, we’ll be doing that in Beijing.”