The first of August is a day that will go down in Italian sports history as Lamont Jacobs won the gold medal in the men’s 100 meters only minutes after fellow countryman Gianmarco Tamberi captured gold in the men’s high jump. And Italian national broadcaster RAI was on site in force as more than 240 staffers are in Tokyo to fully produce the coverage which is seen back home. 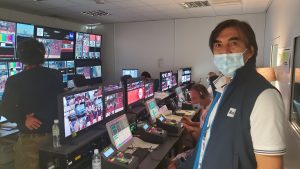 RAI’s Daniele Gotti in the RAI sports production gallery at the IBC.

“We have 25 people from radio and then on TV 125 production and technical personnel and then the rest are journalists and commentators,” says RAI’s Daniele Gotti, Olympics project manager.

Two full production galleries are at the IBC with one for the Olympics coverage and one for news coverage. With 40 channels of EVS and a separate audio area it is ready to take on the task of producing a full day of coverage every day of the games. Three signals are sent back to Italy, one each for the Olympics coverage and news plus a third for a late-night “best of” program. While most broadcasters have leaned heavily into remote production back home RAI has gone the other way, producing everything from Tokyo.

“We didn’t change our plan from last year and just a couple of people decided at the end not to come,” says Gotti. “But, basically, this is the same production plan as last year.”

For the first time RAI has rented an external studio from OBS and its located in the OBS studio tower in Odaiba that overlooks the Rainbow Bridge and Tokyo Bay.

Six ENG crews are also part of the plan, using bonded cellular packs to get signals back from mixed zones in athletics, swimming, and fencing. And the team also makes use of the OBS Content+ system.

“It’s the first time we’ve used it and it’s absolutely a good system and we take a lot of stuff from it,” says Gotti.