NBC Sports is going all out for its coverage of the 2020 Tokyo Olympics overseas, but, for this large-scale effort, the stateside team in Stamford, CT, is pitching in with plenty of resources. Stamford is playing its largest role in an Olympics production to date: the two-week event calls for five simultaneous studios and control rooms, four mobile units at the truck dock, and the largest iteration ever of NBC’s Off-Tube Factory remote commentary operation.

“Technologically, I think we’re stretching the boundaries,” says Tim Canary, VP, engineering, NBC Sports Group. “It’s truly a technological marvel how we’ve able to do all this, considering all the challenges of the past year and a half.” 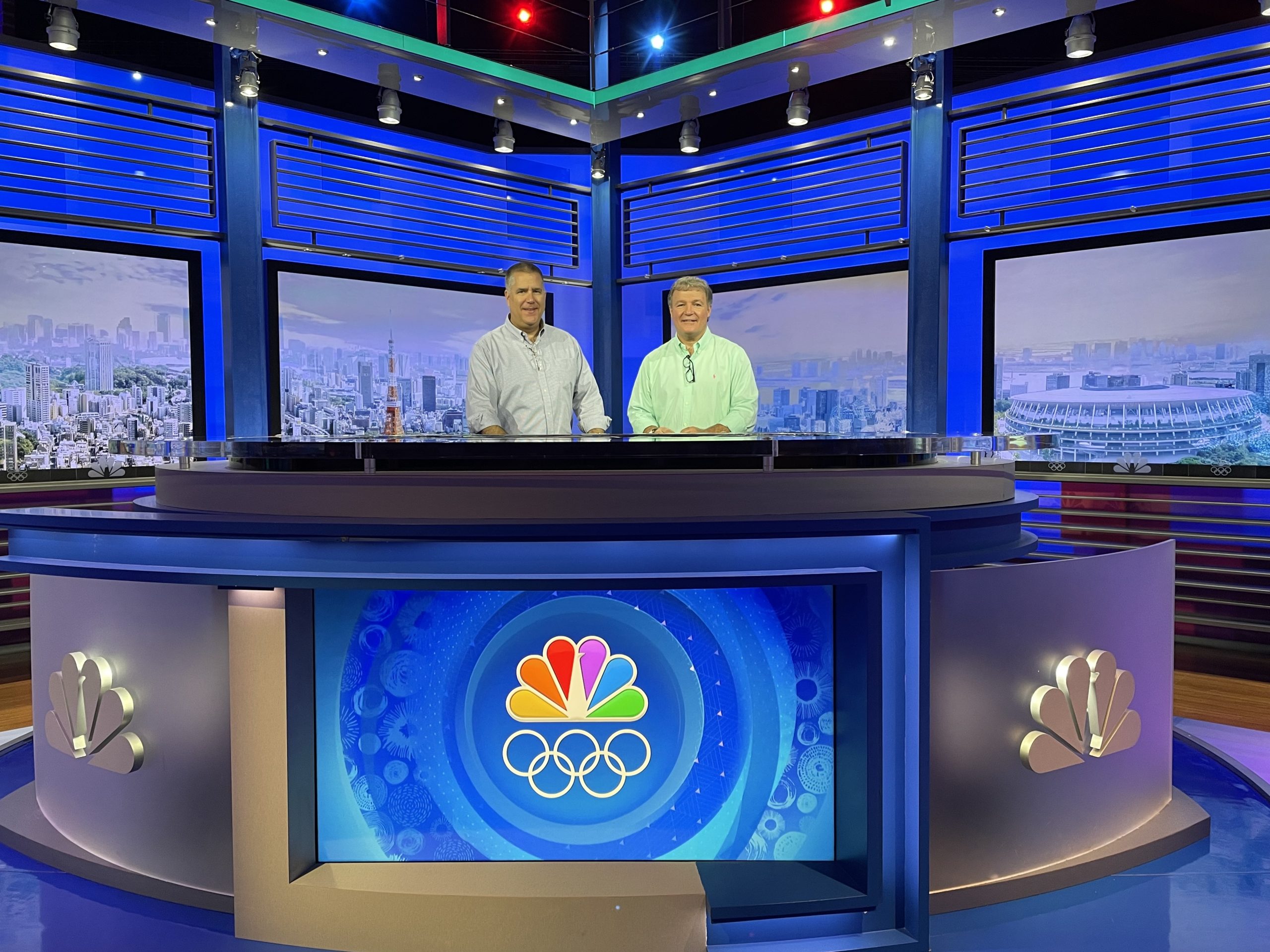 One of the biggest complements in NBC’s Olympics coverage, the number of studio shows is staggering. Whereas the sets in Tokyo are designed for virtualization, such as augmented reality and virtual reality, the sets in Stamford are based on versatility. The profusion of Olympic events calls for ample studio presence, and, with a 13-hour time difference, the broadcaster has deployed all available spaces in a variety of sizes.

The schedule begins in Stamford at 6 p.m. ET on USA with host Kathryn Tappen, Director Jennifer Morrison, and Producer Matt Casey from the Odaiba TV Tower in Tokyo. They are followed by host Ahmed Fareed, Director Mike Torello, and Producer Aaron Bearden at 2 a.m. on USA in Studio 3. Seven hours later, Liam McHugh takes over at 10 a.m. on USA in Studio 2 with Director Ray Herbert and Producer Brett Castelluccio. McHugh remains in Studio 2 from 8 p.m. to 5 a.m. for coverage on NBCSN with Producer Paige Shepperly. Wrapping up the broadcaster’s linear coverage in Stamford, Golf Channel’s Live From provides a prematch show from 5 p.m. to 6:30 p.m. and a postmatch show from 3 a.m. to 4 a.m. Located in Studio 1, Anna Whitley works alongside Coordinating Producers Ben Daughan and Matt Hegarty, Producers Alan Robison and Arthur Volpe, and Directors Will Siegrist and Mark Mosback, while Todd Lewis offers commentary from Tokyo. 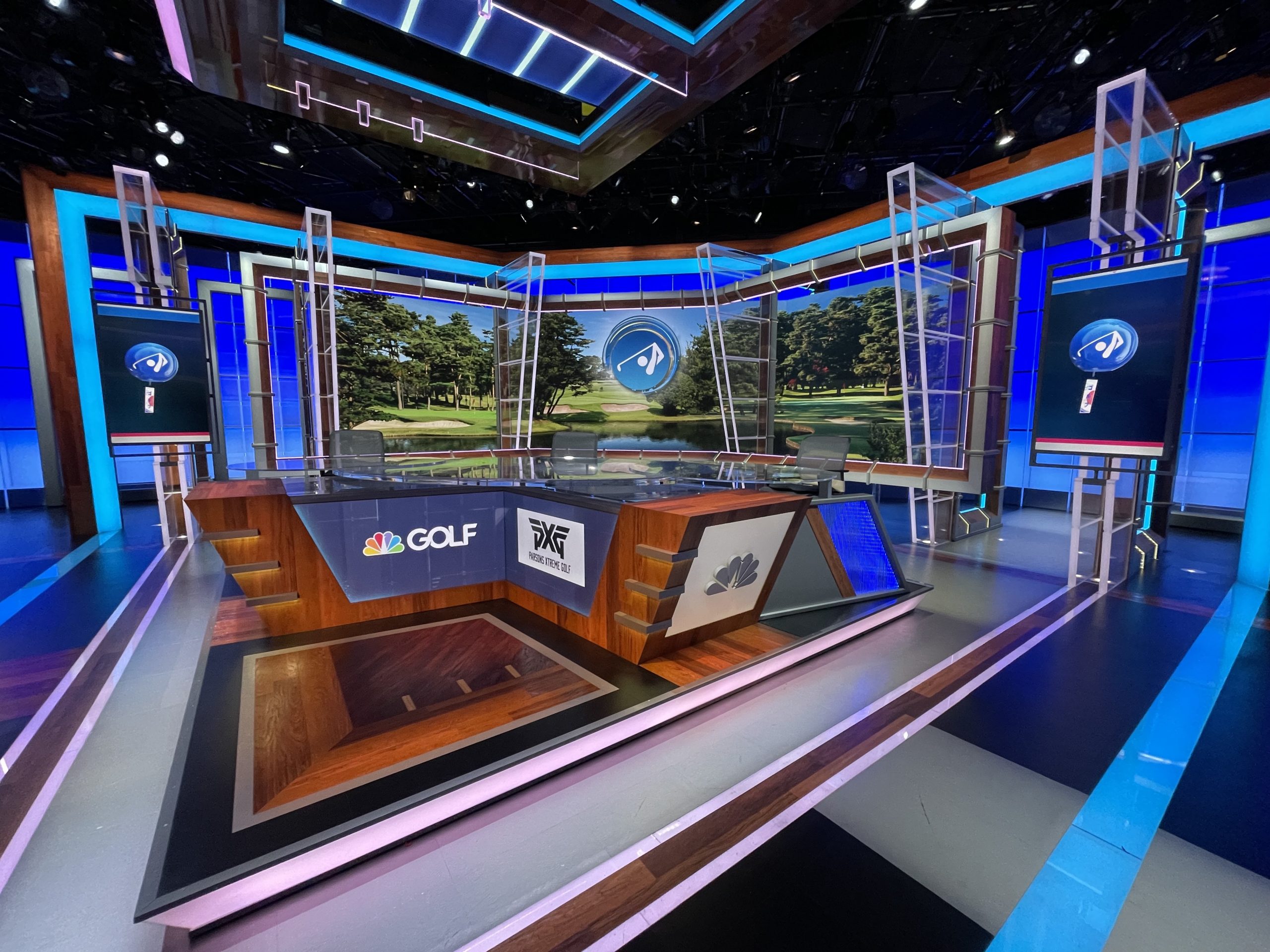 On the digital side, Rich Eisen headlines Tokyo Gold from 11 a.m. to noon in Studio 6 on Peacock with Producer Dan Steir and Director Patrick McManus. Studio 3 is in use for Tokyo Tonight, with hosts Kenny Mayne, Cari Champion, and Jac Collinsworth conducting interviews. This show on Peacock, running from 7:30 p.m. to midnight Monday–Saturday and 6:30 p.m. to midnight Sunday, is handled by Producers Alexa Maremaa and Adam Littlefield and Director Susan King. Studio 1 is on the air for On Her Turf on Peacock from 7 p.m. to 7:30 p.m. and for hits on Twitter. On Her Turf is driven by hosts Lindsay Czarniak, MJ Acosta-Ruiz, and Lolo Jones; the Twitter coverage stars LaChina Robinson and Adam Rippen. A Gymnastics Digital show is based in Studio 7, with hosts John Roethlisberger and Bridget Sloan, Producer Lana Sherman, and Director/TD Corey Boudreau. 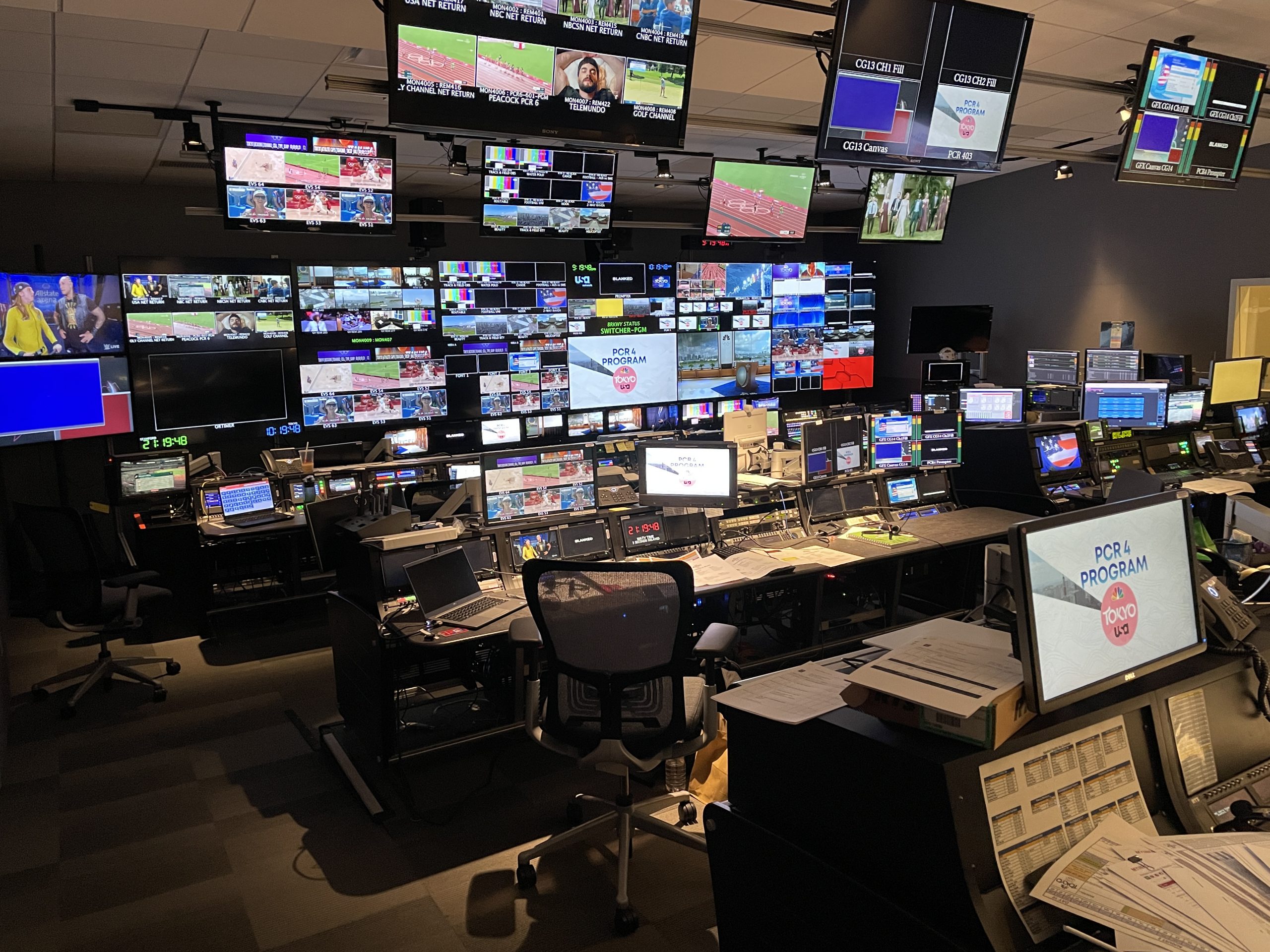 PCR4 is producing a part of USA’s Olympics coverage.

Driving these studios are five control rooms. PCR3 handles McHugh’s coverage on USA in Studio 2; the rest of the action on USA with Fareed in Studio 3 is driven by PCR4. PCR6 controls the two digital shows on Peacock: Tokyo Gold in Studio 6 and Tokyo Tonight in Studio 3. PCR8 controls a mix of linear and digital coming from Studio 1, including Live From, On Her Turf, and the Twitter-only coverage. The SimplyLive-based PCR9 is at the helm of the Gymnastics Digital show in Studio 7.

The 24-hour cycle of operations is controlled by two teams on separate daytime and nighttime shifts. With a new surge in COVID-19 cases in the U.S., the broadcaster has prioritized the well-being of staffers. Throughout the long hours of the late night into early morning, therefore, control rooms receive substantial cleaning to curb the potential spread of the virus. When cleaning is being done to a certain room or a competition overlaps into another, the production team that is without a technical home goes to Live Media Group Gracie mobile unit in the docking bay.

“Distancing was one of the challenges that we needed to overcome, and this can’t be done without all of our departments working together,” notes Tom Popple, VP, studio operations and facilities, NBC Sports Group. “Previously, the Highlights Factory and other [workflows] were consolidated into one room, but this is something that we did for other events, like the NHL and Sunday Night Football.”

To stitch the studios and control rooms together, NBC Sports developed the Content Command Center: an area where the best highlight packages can be created for linear and digital coverage. Led by Manager, Editorial Content/Story Editor Megan Soisson, this new area took over the space used as a screening room by researchers for Football Night in America.

“Since OBS offers the highlights in a package,” says Popple, “we wanted to make sure we took advantage of it and give each day the best possible clips. The team sees the footage in here and calls to the producers to let them know of a great highlight.”

The Trucks: MTVG, LMG Roll Out Quartet of Trucks in Stamford 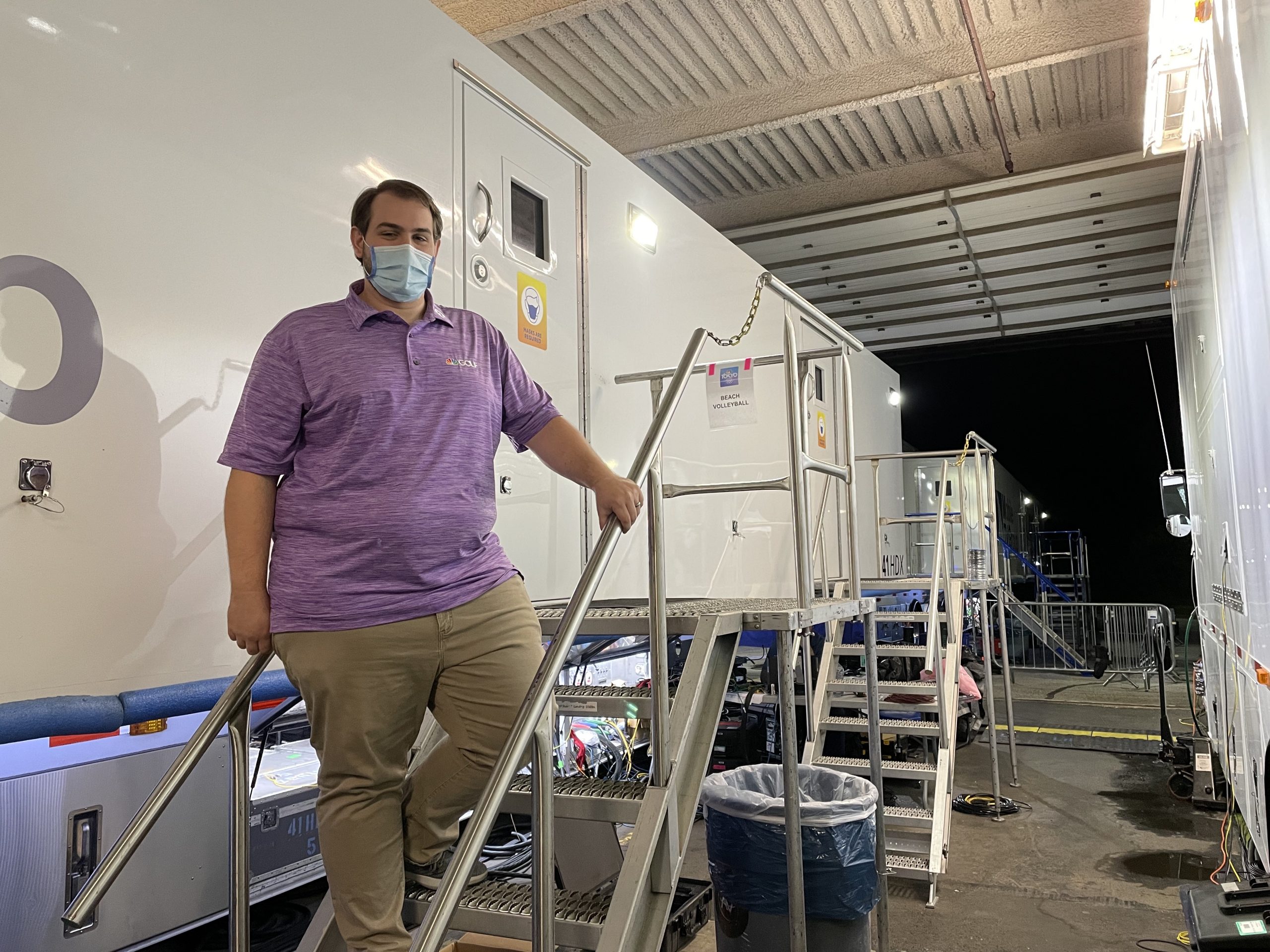 Besides all the PCRs in-house, NBC has pulled up four mobile units at the truck dock in Stamford. Mobile TV Group’s 39 Flex (serving as PCR13) is handling golf coverage (on Golf Channel and a 4K/UHD specialty channel), and HDX-41 is handling beach volleyball — both in 1080p HDR. Meanwhile, Live Mobile Group’s Sophie (PCR11) is home to men’s and women’s basketball (in 1080i SDR), and Gracie serves as the swing unit/backup PCR.

To allow social-distancing on the trucks, NBC is moved graphics operators from the trucks to a trailer in the compound. An extra trailer is also on hand to house tech managers and provide extra space as needed.

MTVG’s trucks arrived early to serve as the home of NBC’s Open Championship coverage, which was produced remotely this year from Stamford due to COVID travel limitations. The Open provided NBA with a valuable opportunity to test and debug any issues prior to the Games.

“It has been quite an interesting puzzle trying to get all this together,” says Dominic Torchia, director, remote engineering and technology, NBC Sports Group. “Pre-COVID, we had only one truck that was scheduled to be here. But, after the COVID delay happened, [the production team] had to rethink the way that they were going to produce everything from the building, so we added these additional trucks. Thankfully, the mobile-unit vendors have been excellent about being flexible with us.”

All trucks are hooked into the interconnect room that NBC has built this year to house the AT&T/MediaLinks transmission frame and other routing equipment. The trucks have dual 10-GB connectivity to the MediaLinks shelf, which connects to the broader AT&T network that NBC relies on to bring feeds from Tokyo. In addition, the trucks have access to 60+ feeds from the Stamford router system.

The trucks are equipped with Calrec consoles that connect to Calrec RP1 units at each venue in Tokyo (where announcers are located). The A1 directly controls the audio mixer at the venues for the local announcing mix.

“That has actually worked flawlessly,” says Torchia. “The A1s have been happy with it, and it feels like they were onsite. Also, all the Olympics intercoms are trunked together, and these trucks are no exception. They’re all connected so [the production team] can talk to anybody here, at any venue in Tokyo, or at 30 Rock or CNBC. It has been an amazing setup in terms of comms.” 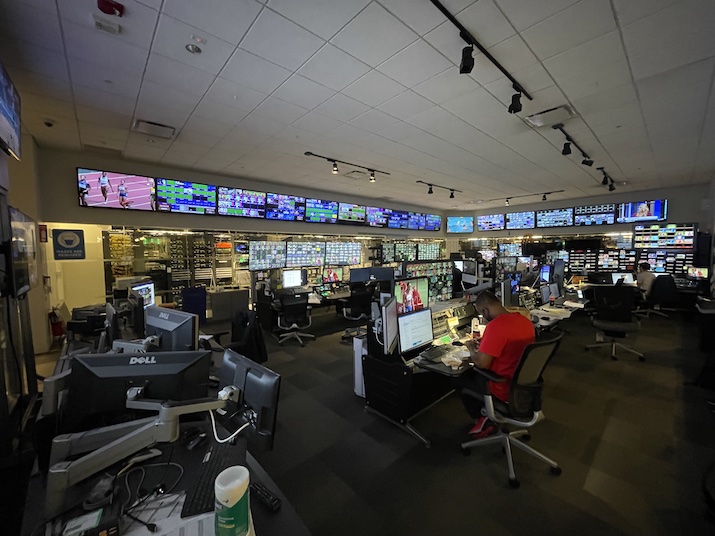 The Broadcast Operations Center (BOC) is one of the core areas in NBC Sports’ Olympics efforts in Stamford.

In addition to Stamford as the primary base for content operations, NBC is leveraging an additional seven U.S. locations for its sprawling Olympics operation.

30 Rock in New York City is home to the NBCSN production and is handling all network commercial insertion. Telemundo’s Miami facility is handling the Telemundo and Olympic Channel productions as well as serving as the home for wrestling and tennis live shows. CNBC broadcasts are produced out of its HQ in Englewood Cliffs, NJ. NBC’s NOC at Englewood Cliffs is also responsible for cable-network release, longform VOD, Off-Tube DR, and network DR. In Denver, NBC’s Dry Creek facility is handling network transmission, network DR, cable DR, and the stations hub. And iStream Planet oversees all streaming at its Las Vegas facility.

“Due to COVID,” says Canary, “we needed to travel fewer people and limit the footprint [in Tokyo] as much as we could, so we moved a lot of things to Stamford. But the challenge became that this building started to be too full, so we moved complete production-control rooms for different networks — like CNBC, NBCSN, and the Olympic Channel — to other locations. That’s a huge change for us.”

Friends & Family Production: With No Fans in the Stands, NBC Gets Creative 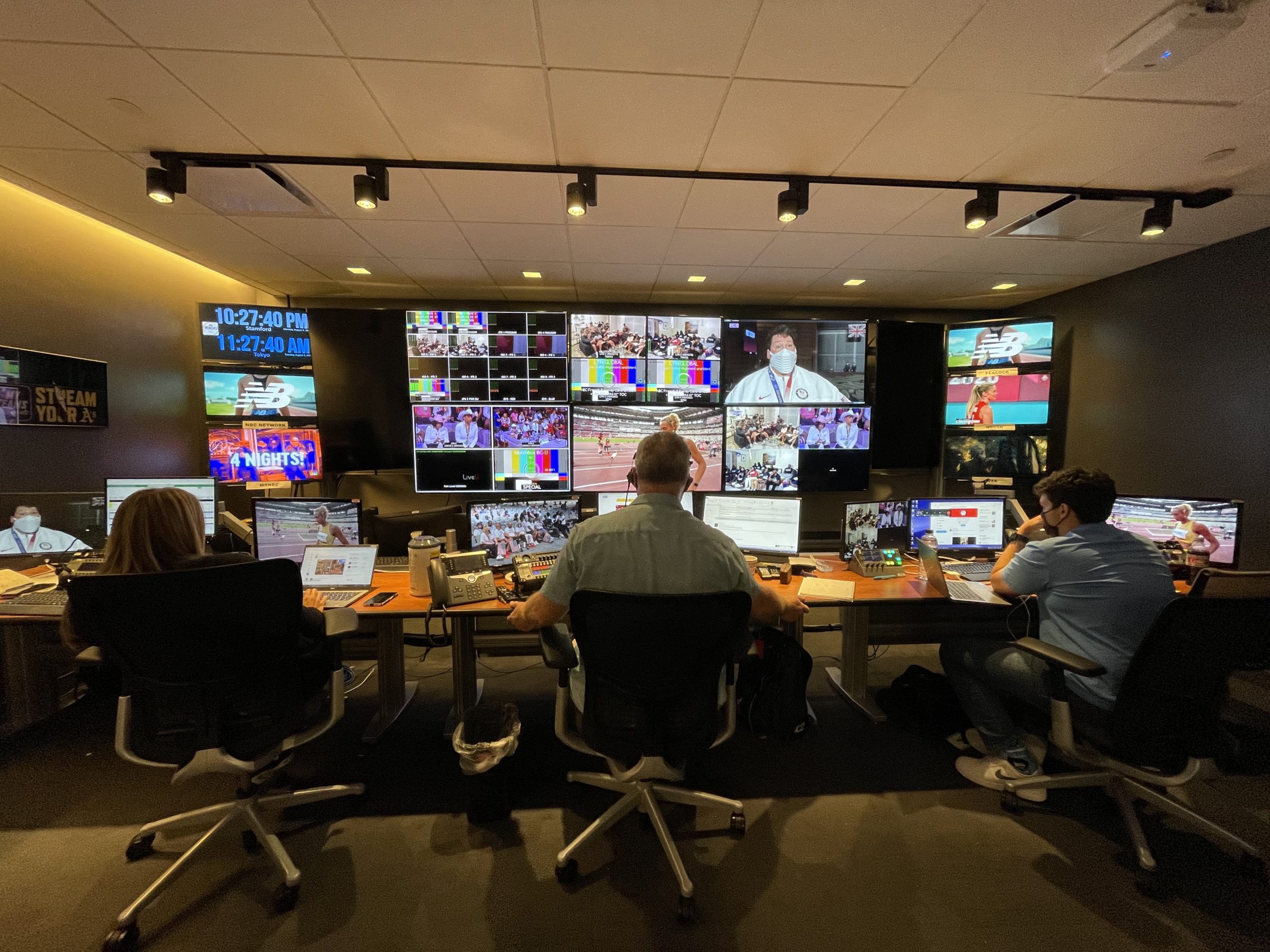 The Friends & Family production took over what was previously an RSN social-media monitoring room in Stamford.

In addition to the studios, control rooms, and trucks in Stamford, NBC has created a “Friends & Family” production room, which integrates athletes’ loved ones into its Olympics coverage (since fans are not permitted at the venues in Tokyo). Canary and his team converted an RSN’s unused social-media–monitoring room to create the Friends & Family production room, and the effort has paid off with clips lighting up social media night after night.

Friends & Family moments are often captured at family homes or private locations, with LTN deployed to connect families via remote setups and Microsoft Teams calls. NBC also has an ENG team on hand at the daily live USOPC/NBC watch party (5 p.m.–midnight ET) in the ballroom at the Loews Sapphire Falls hotel in Orlando (Stamford has four LTN connections to the hotel and two directly to Tokyo).

After a year-long delay fraught with unprecedented challenges, the NBC Olympics team is looking to end its massive Tokyo campaign on a high note.

“It’s hard to put into words what everyone on the team went through to get here and the sacrifices that everyone made,” says Canary. “But to be here at this point is amazing. It’s very humbling to see how the people come together and rise to the challenge to get everything done and create all these new and exciting things.”