For NBC, the Olympics are a non-stop marathon of content creation. Although the live competition obviously plays an integral role in that effort, it’s the tape, postproduction, and graphics teams that bring everything together to create the broadcaster’s unique brand of Olympics storytelling. For the Tokyo 2020 Games, the Tape/EVS, Ingest, & Highlights; Postproduction & Editing; and Graphics & Integration teams at NBC Sports headquarters in Stamford, CT, are creating more content than for any Olympic Games in history.

“We’re a really tight group [at NBC Olympics],” says NBC Sports Director, Post-Production and Graphics, Stacey Georgiou, “so everyone is really happy to get back and to be working with each other on an Olympics again. The biggest difference is having more people working remotely [due to COVID protocols]. But that has gone well and created a lot more efficiency. Whether they’re working [in Stamford] or from home, it’s just great to see all the happiness in people’s faces and have everyone working together again.” 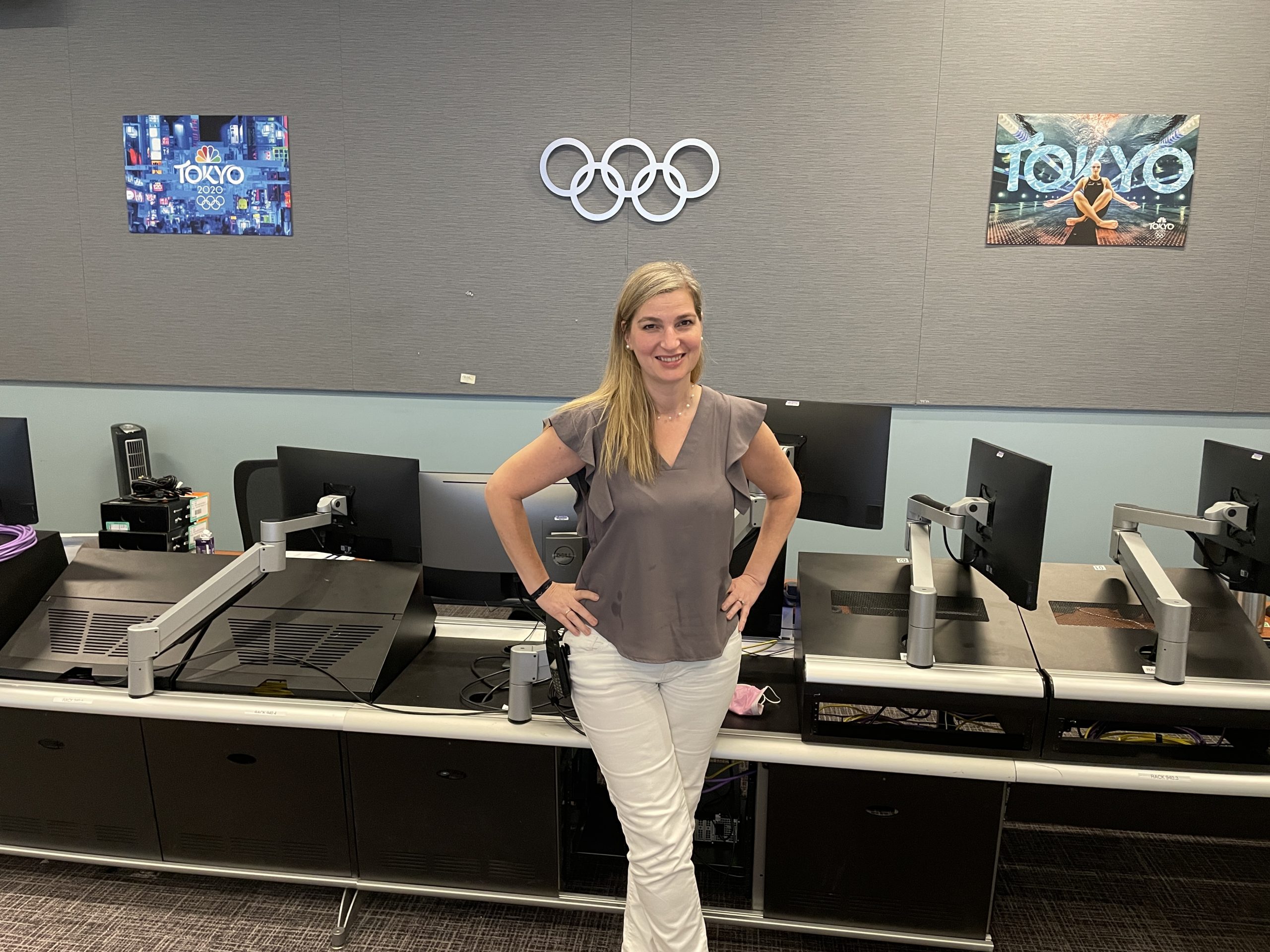 On the postproduction and editing side, NBC uses Avid Media Composer for craft editing and relies heavily on Avid Interplay media-asset management and Media Central workflow management. Other key vendors include EVS for playback, Telestream for transcode and orchestration, Signiant for file transfer between Stamford and Tokyo, and Dell/EMC Isilon for storage. NBC has also added Telestream Wirecast and vMix video-streaming software to the mix this year.

In all, Stamford has 65 Media Composer editing suites, but many editors are remoting in using HP ZCentral Remote Boost or VMs (virtual machines). Roughly 75% of the postproduction staff is onsite while 25% works from home.

“Because of the pandemic, we had to figure out how to do as much as possible remotely,” says Georgiou. “In the end, we think we came up with a nice mix: some people are remoting in from home, and we have a lot of people here [onsite]. It just depends who you are and what you’re working on at that point in time.”

The postproduction team also has plenty of local storage to fill this year  with more than a petabyte of storage in Stamford.

“It’s fantastic to have that much storage, and it has provided enough room for everyone,” says Georgiou. “Even though we are filling it up very quickly, we haven’t had to move things around like we have in the past [to make room for additional storage].”

She adds that NBC is using Avid Interplay MAM and Media Central more widely across the Olympic operation than ever before. “We also have more people than ever reaching in with MAM and Media Central, and that has been working like a dream. All the [Highlights Factory] shot selectors [in overflow space] at the Marriott are working from MAM, so they have constant access. We bridge the gap with digital so well, and we’ve created a nice smooth synergy between post and digital.”

Graphics & Integration: Chyron Is Back for Another Olympics Run With NBC

On the graphics front, Georgiou says, the crew is split roughly 50-50 between working onsite and working from home via Splashtop remote-desktop software. In all, nearly 30 graphics staffers are working in three shifts during the Games.

Chyron, which has supplied graphics technology to NBC Olympics since 2008, is once again delivering all real-time graphics-authoring and -playout solutions for the Games. It is supporting NBC Olympics’ remote-production workflow with LyricX (a 4K-ready solution for graphics creation and playout) systems in Stamford to enable an agile workflow for adapting graphics and getting them to air quickly.

“Chyron has been fantastic as always,” says Georgiou. “They’ve helped us a lot with rental systems that we sent out to 30 Rock, Telemundo, CNBC, as well as here and in Tokyo. So everybody now has our Chyron graphics package, and that has made things a lot more seamless. We’ve had lots of good communication and great partnerships with all of our vendors this year, especially Chyron.”

In addition, NBC is deploying Red Giant motion-graphics software (now part of Maxon) to create elements for its Olympics coverage. 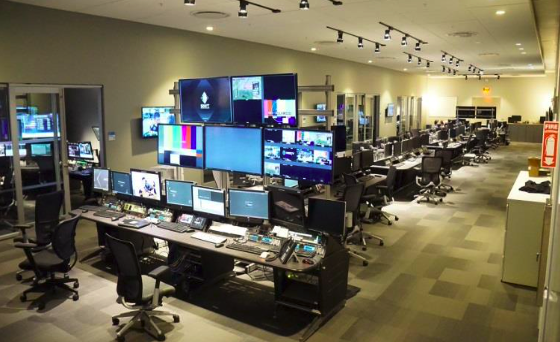 The Central Tape area features the supervisor station upfront, AD seats behind it, and EVS playback rooms along the outside.

In Stamford, the Central Tape & Ingest area serves as the main hub for U.S.-based coverage. NBC’s main record apparatus has moved back to Stamford, and the hundred feeds from different Tokyo venues, from host broadcaster OBS, and from NBC’s unilateral Tokyo feed go to Stamford and are recorded there.

With all this content coming in, Stamford and NBC’s U.S. extension studios (at 30 Rock in NYC, Telemundo in Miami, and CNBC in Englewood Cliffs, NJ) are equipped with a dozen EVS playback rooms and a robust staff of 48 EVS operators and three EVS media managers. Each EVS server has two outputs and multiple inputs (varying by machine). They are all networked, and those at 30 Rock and CNBC are on the same network to facilitate copying clips back and forth. Overseeing the operation are five CVT production supervisors: Kaare Numme, Ryan Burke, Neil Gallow, Nick Pace, and Susan Heffernan.

Each EVS playback room has a tape AD to manage the room and content, as well as a tape PA/AD to assist in organizing and managing the different media and in cueing up the correct elements. Each room is equipped with EVS IPDirectors to help the production team view clips.

Central Ingest has three EVS media managers onsite to help manage the servers each day. They work in conjunction with the CVT supervisors and clean up each EVS server every day so that it is ready with the most capacity the next day. 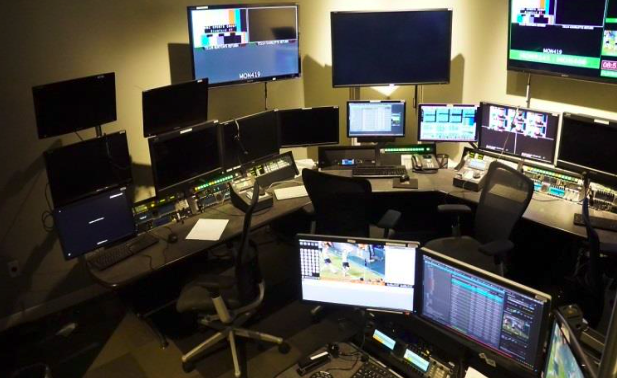 Any EVS media that NBC wants saved during the Olympics is archived locally in the near-line server or in the MAM system so it can be easily restored when necessary for quick-turnaround use.

In addition to the five production supervisors, Central Tape & Ingest is staffed with 14 daypart tape producers, 21 tape APs/PAs, 16 sport associate directors, and nine production assistants. Each daypart is assigned a tape AD and a tape AP who sit in the show’s dedicated EVS playback room. They are solely responsible for managing their room, which comprises three EVS operators and covers taped segments, highlights, sponsored elements, etc.

Each sports producer is assigned a CVT AD/AP for each live or taped session during the broadcast day. The AD/AP will be on the headset in Central Tape, working next to a logger, who keeps track of the specific sports and session. The AD/AP will help the sports producer create a segment sheet while taping the specific sport. After the session is over, the AD is responsible for clipping the appropriate segments and pushing them to the appropriate EVS playback room. If a sport needs to be edited, the same workflow remains in place, but the AD/AP is assigned to a specific Avid edit room in Central Ingest to assemble segments under the producer’s direction. 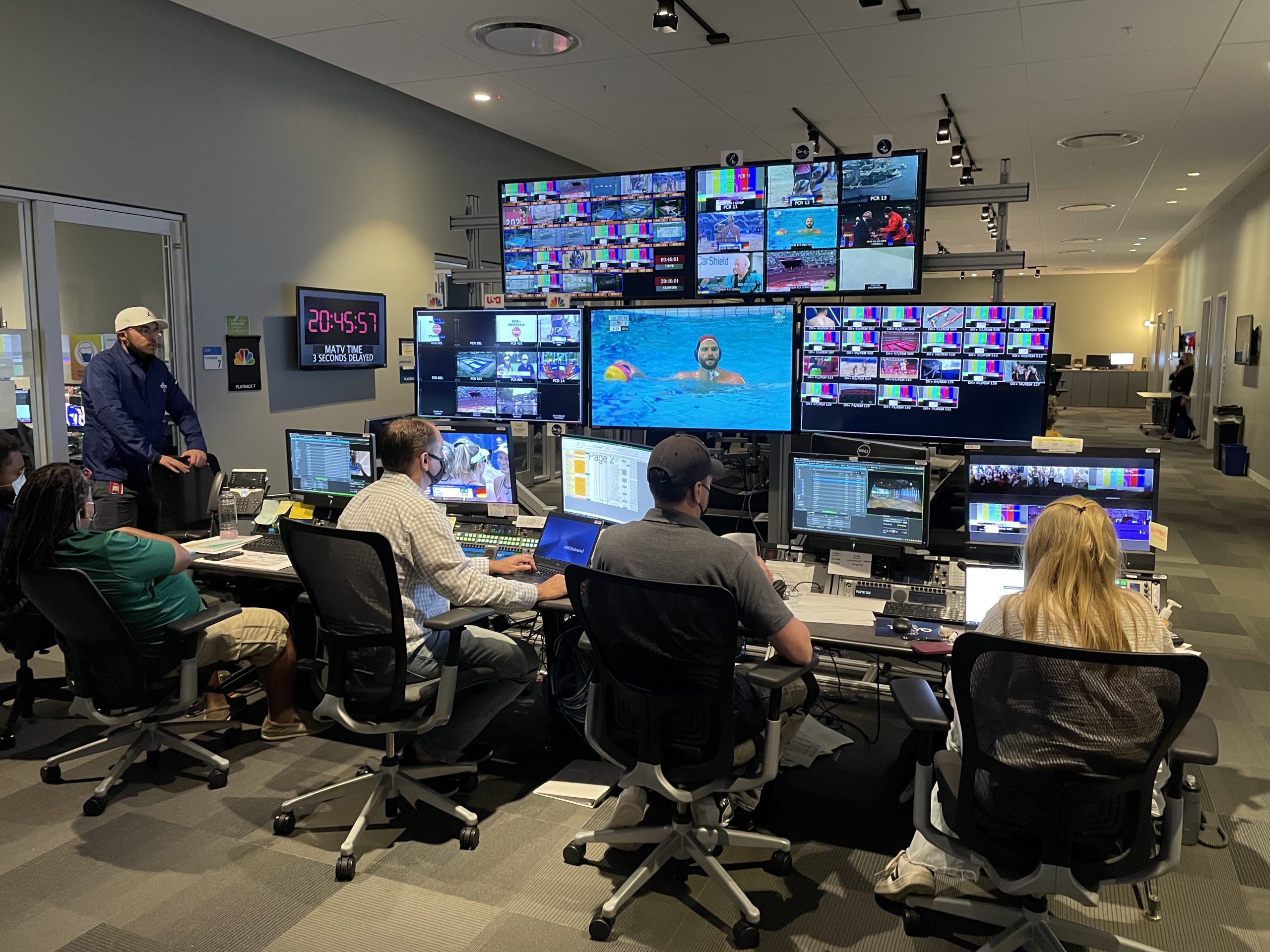 Meanwhile, the Central Tape Highlights team compiles a list of needed highlights before each competition day in collaboration with each daypart producer and the Content Command Center. The mission is to serve as the one-stop place for all needed pieces and to help limit multiple groups from cutting duplicated highlights, as well as free up the craft editing teams for more highly-produced pieces.

The Content Command Center monitors content on-air from OBS feeds, pieces created by the Highlights Factory and craft editors, and show/sport edits. They identify content that should be shared with all shows.

The Olympic Archive Team works hand-in-hand with the production team to make sure all content is properly labeled, recorded, logged, and archived. Each country, venue, and sport has a specific “code” to ensure that everything is organized and easy to read and creates a “clean search environment” on all platforms.

While the Tokyo Games content machine continues to chug along in Stamford, NBC already has its eyes on what could be possible for graphics, post, and tape for the Beijing Winter Games just six months from now.

“So many lessons have already been learned in just the past couple weeks,” says Georgiou. “I think, in six months from now, we’ll be even more buttoned-up than we are now. We’re still plowing through Tokyo right now, but I truly believe we’re going to be even bigger and better than this for Beijing.”