NBCUniversal efforts in 4K HDR video and Dolby Atmos audio date to the Rio 2016 Olympics, but the Tokyo Games mark the widest distribution — by far — of live 4K HDR Olympics content to U.S. viewers. Although NBC’s production model to create this content in Tokyo represents a giant leap forward in the evolution of live 4K HDR and Dolby Atmos production, the transmission and distribution scheme necessary to maintain video and audio quality all the way to viewers’ homes has been equally groundbreaking.

For the first time, NBC’s Opening Ceremony and Olympics primetime shows are available live via localized 4K HDR simulcasts with Dolby Atmos audio. In partnership with NBC affiliate stations, NBCU Operations & Technology (O&T) has rolled out a solution to enable local 4K HDR simulcasts with local commercial insertion in the top 52 markets — a first for a domestic broadcast network.

“We’re very proud to have gotten to this point,” says Dotan Johnson, VP, on-air operations, NBCU O&T, “and we are delighted to be able to deliver the Olympics in live 4K HDR for our NBC audiences.” 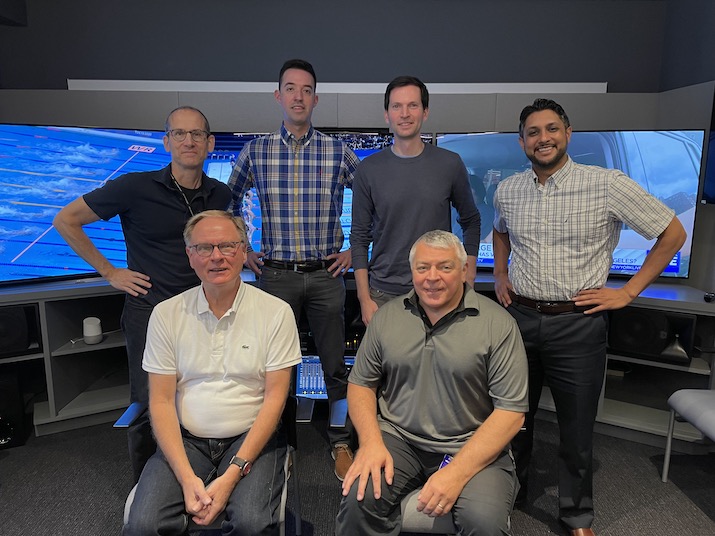 The feeds are backhauled via AT&T fiber circuits and arrive at the facility as 1080p HLG using Media Links J2K encoders. The feeds are converted to PQ (perceptual quantizer) and 4K resolution to match NBCU’s distribution standard. All HDR conversions are performed through a series of NBCU-optimized LUTs (look-up tables).

“We were able to develop what we call our single-stream UHD HDR recommendations by fine-tuning all the conversions. In collaboration with Cromorama to develop LUTs, we preserve the original artistic intent — the colors, light, and white levels — in a consistent manner,” says Chris Seeger, director, advanced content production technology, NBCU O&T. Converting the feed from HLG to PQ, he adds, preserves the capabilities of linear production, which currently occurs at a peak of 1,000 nits. PQ enables both content types (SDR and HDR) to be displayed on the same live linear channel without changing the original artistic intent.

NBCU has chosen PQ as their linear-distribution standard and conforms all remote contribution to this format to simplify distribution workflows. The broadcaster has also standardized on PQ as its live-emission format, which is also the most common HDR format for streaming devices/services. 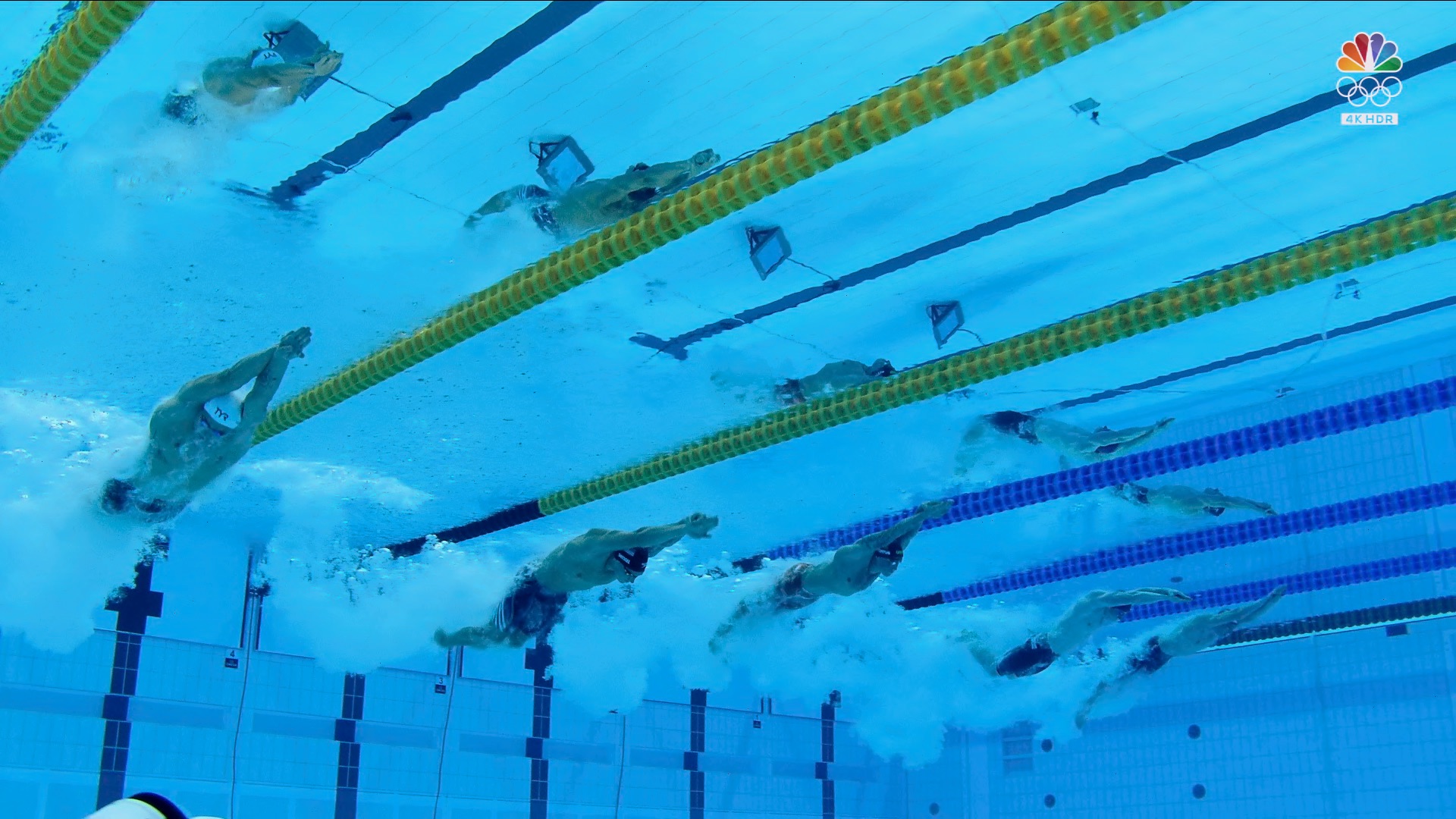 During primetime, output for a 4K HDR channel is encoded into an HEVC, mezzanine contribution stream by Harmonic’s XOS Advanced Media Processor. This stream is sent to NBC TV stations in the top 52 markets using Techex MWEdge, which interoperates with NBCU-developed software (Motiv) installed at the affiliate using open-source SRT protocol over managed fiber connectivity made possible by Comcast Business. Mike Harrell, VP, distribution engineering, NBCU O&T, notes that “each affiliate is interconnected to our next-generation backbone, built on top of Comcast’s nation-wide optical backbone also provided by Comcast Business.”

At each station, Harmonic’s XOS system receives the mezzanine HEVC feed, inserts local commercials and outputs an adaptive-bitrate (ABR) ladder with the top rendition at 18 Mbps.

“What we’re doing here is maintaining the highest possible quality throughout the entire chain,” says Anil Abraham, senior director, architecture and engineering, NBCU O&T. “We don’t ever want to see a big shift downward in quality as you get to the end of the chain. From the onset of this project, our goal has been to maintain that experience for the end viewer as if they were standing in Tokyo watching the live feed [at the IBC].

“What we’re trying to do for our distributors is offer something that they can provide all the way to the home without re-encoding,” he continues. “Leaving our plant [is] a ready-for-consumer encoded stream that can be passed directly to the consumer with the same pristine quality.”

Immersive Audio to the Home With Dolby Atmos 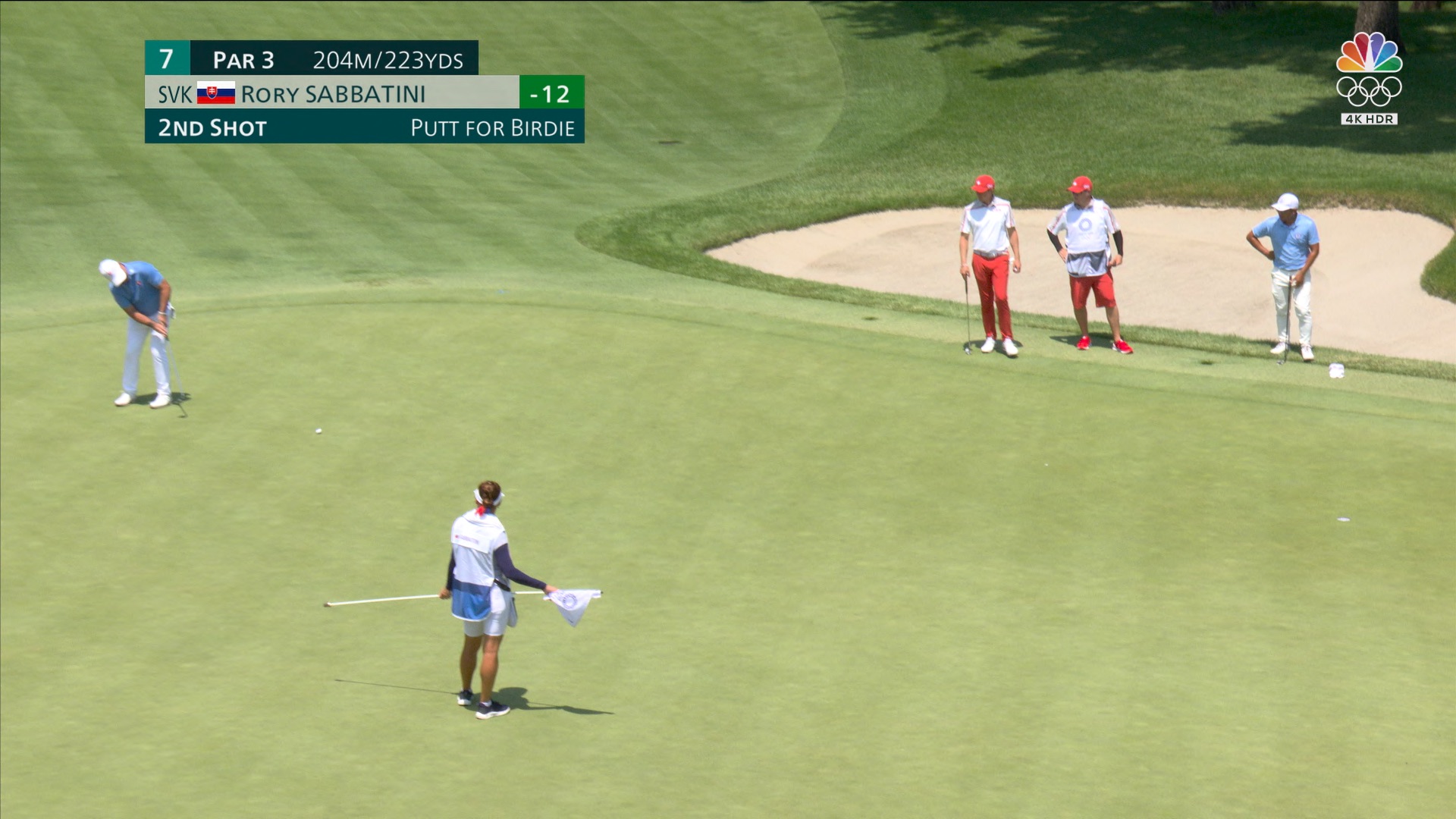 The transmission chain for audio is equally complex for delivering Dolby Atmos to U.S. viewers with capable sound systems. First, the feed is sent from Tokyo as JPEG2000 with 10 channels of uncompressed PCM audio. In Englewood Cliffs, it’s encoded to Dolby AC-4 — marking the first time AC-4 is being used for pure mezzanine distribution, according to Jim Starzynski, director/principal audio engineer, NBCUniversal. From there, the audio stream is sent along to the Harmonic XOS encoder at Englewood Cliffs and ultimately converted to Dolby Digital Plus JOC (Dolby Digital Plus with Dolby Atmos overhead-speaker content) for release by affiliates.

“Our main goal was to establish a straight, clean piece of wire from NBC to our stations,” says Starzynski. “AC4 offered us the option to do that. It does a great job, and it’s extremely efficient. It has a lot of amazing capabilities in terms of metadata-based features as well, but, this time, we were more focused on unaltered phase-aligned distribution. Topping this off is the beauty of an Atmos transcode within the TV-station Harmonic XOS, just perfect for maintaining quality!”

Says Clarence Hau, SVP, standards, policy and advanced engineering, NBCU, “We’ve been extremely happy with the live productions from the team in Tokyo. They had to entirely rebuild the IBC and all their workflows for this. These HDR and Atmos production enhancements, coupled with the optimized encoding and delivery paths, have resulted in a new level of quality for our viewers.”

Our Take: A Feast for the Eyes and Ears From Glass to Glass 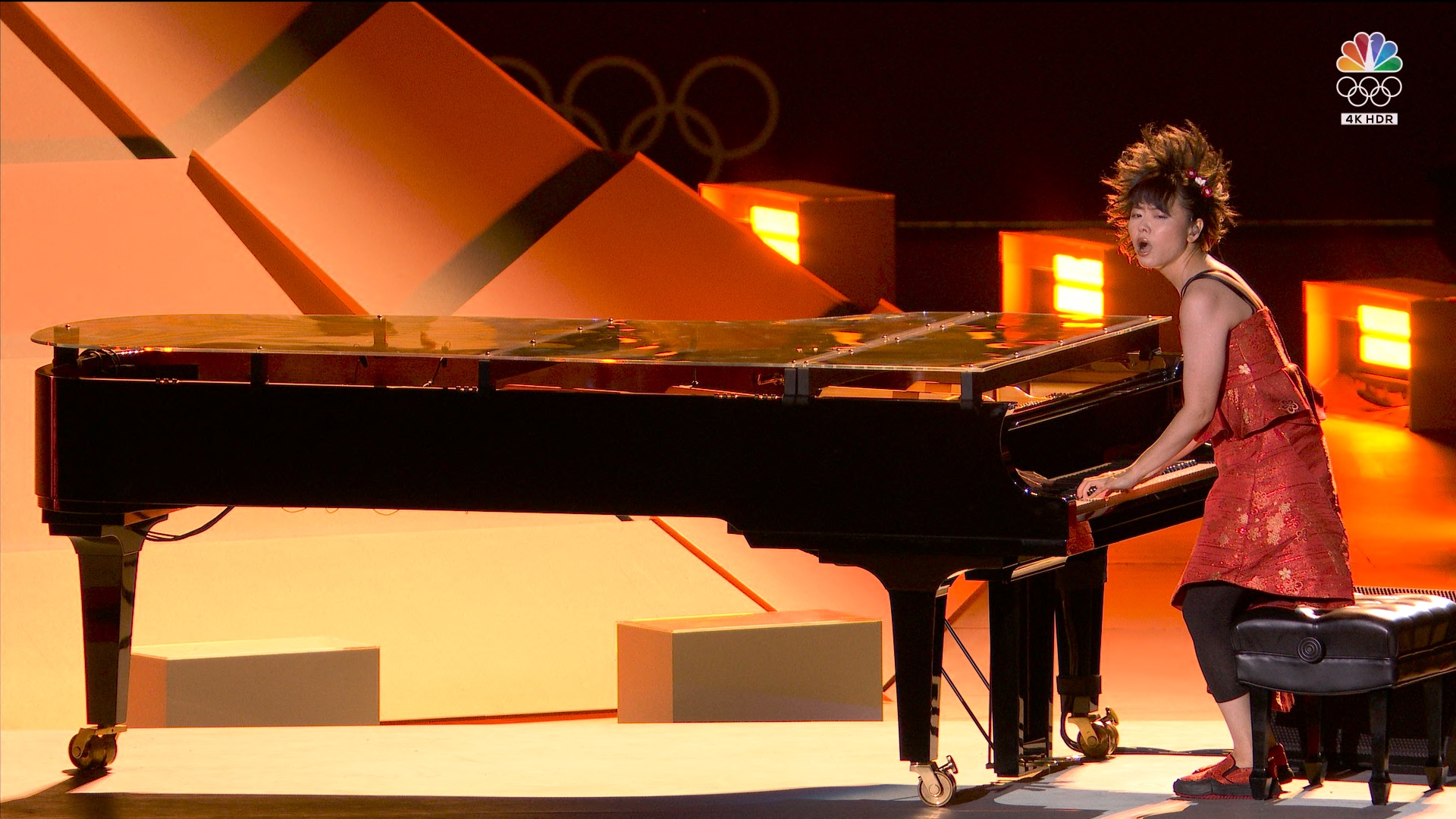 SVG attended a demo of NBCU’s Tokyo Olympics 4K HDR Dolby Atmos experience this week at the NOC in Englewood Cliffs, and we were thoroughly impressed, to say the least. Highlights of the Games were displayed on three 65-in. OLED 4K TVs (high-end consumer-quality sets, not professional monitors) with an immersive Dolby Atmos sound system.

First, we compared the 4K broadcast side-by-side with the standard HD broadcast. The ability to view the two products next to each other showcased the power that 4K HDR offers. With extremely wide contrast, brilliant color, and ultra-deep blacks, the 4K HDR picture brought the Games to a level this reporter (a veteran of many 4K and HDR demos over the years) has rarely seen.

In addition to being able to see the actual competition action more clearly, the venues were brought to life in a whole new way. We were able to see waves, splashes, and bubbles in the water during swimming; seemingly individual grains of sand kicked up during beach volleyball; specific undulations in the green and fairway during golf; stunningly deep blacks and vibrantly bright colors during the Opening Ceremony; and rich, crisp views of the Tokyo cityscape (especially the clouds overhead) during Mike Tirico’s outdoor-studio segments. 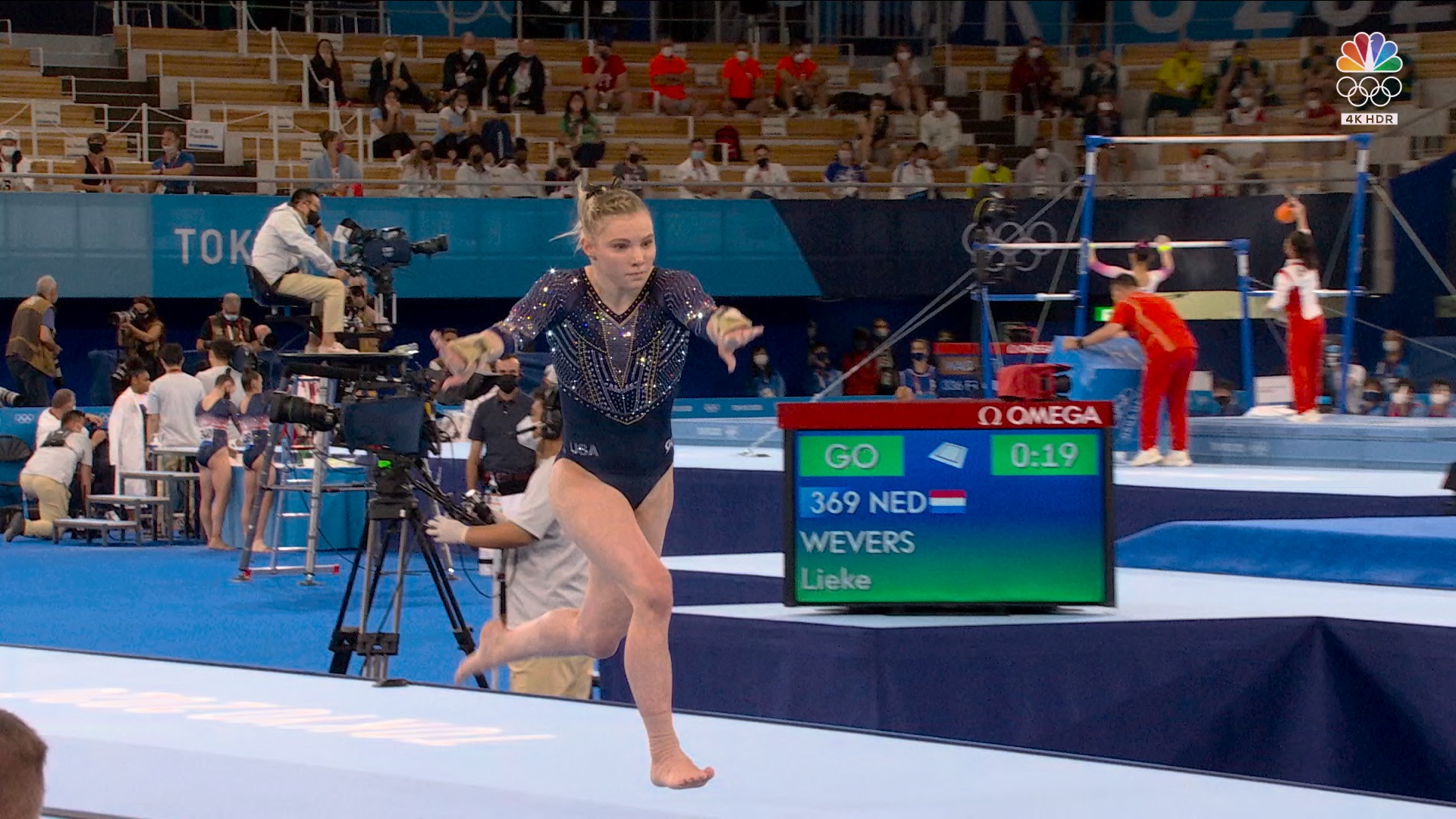 Also important to note — for the “4K-up-res” naysayers — the resolution looked like any 4K picture I have seen, whether it was shot in native 4K or upconverted from 1080p. And, most important, the demo showed the full NBC production with all the resources that entails, rather than the more limited production that likely would have been required with native 4K.

Next up was a three-TV demo showcasing the nearly lossless transmission from Tokyo to the home. The TV set on the far left displayed the inbound feed from Tokyo; in the center was the national NBC feed distributed from Englewood Cliffs; on the far right, the actual playout seen by the viewer at home via a YouTube TV streaming box. Although this reporter’s eyes aren’t necessarily the most refined, I saw absolutely zero loss in picture quality from left (origin from Tokyo) to right (playout in the home) throughout the entire demo. 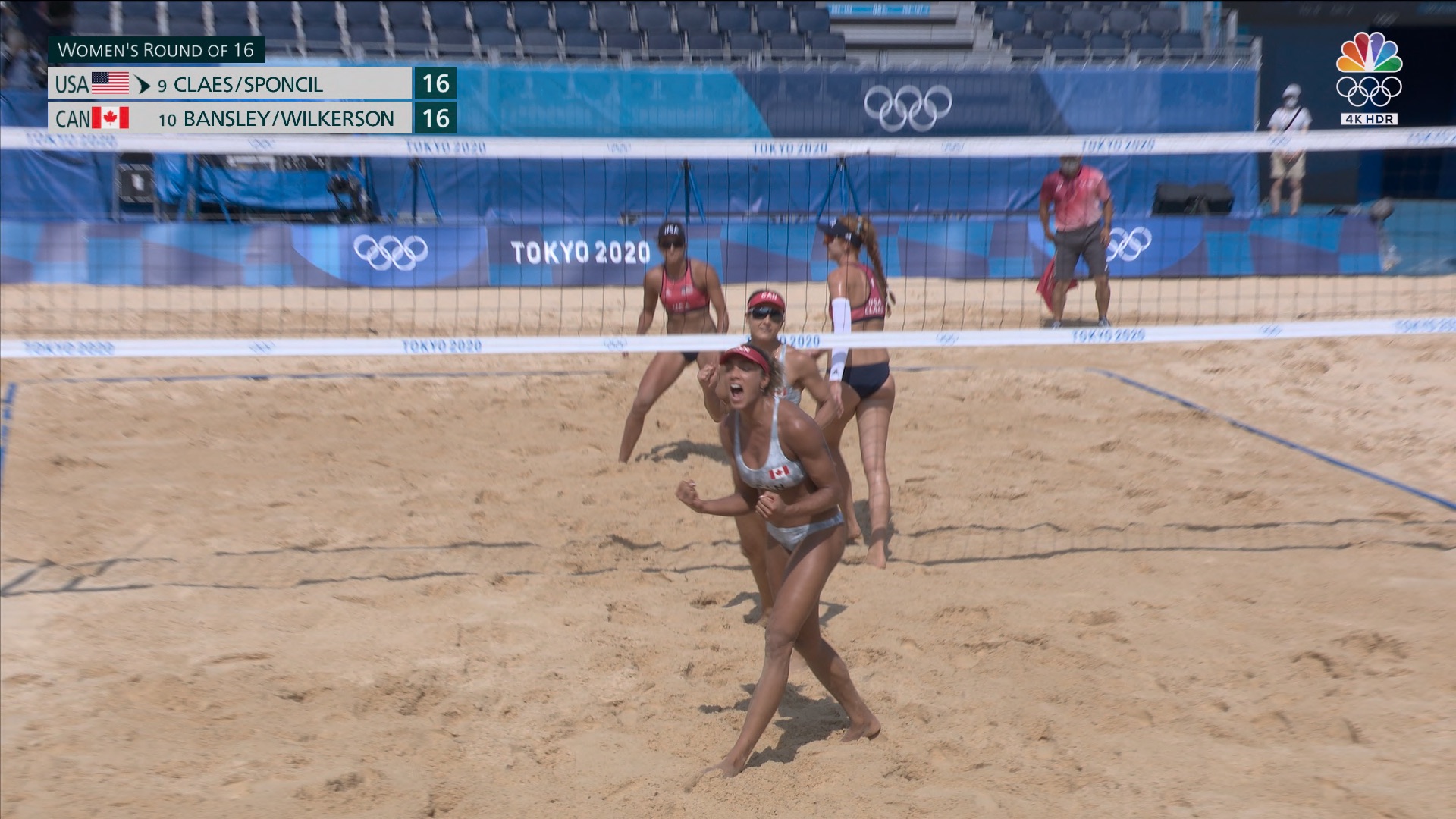 On the audio side, the Dolby Atmos presentation was among the finest I have heard for live sports coverage, bringing the aural immersion of an IMAX theater to the office hosting the demo. Although the sounds of the Opening Ceremony (especially the rousing performance by pianist Hiromi) blew us away in a theatrical sense, it was the sounds of competition that amazed. Most notably, in the swimming coverage, the typically cavernous aquatics center suddenly became a boisterous pot of activity with audio objects filling our ears from all sides. One looks forward to Beijing and what the Dolby Atmos mix could sound like with full crowds in the venues.

Although the 4K HDR and Dolby Atmos ecosystems have plenty of hurdles ahead — wider consumer adoption and remaining holes in the live-production chain, just to name a couple – seeing the Tokyo Games in all their 4K HDR Atmos glory showed what is possible in live sports production. More than ever, this reporter is hoping that the commercial/business challenges of 4K/HDR/Atmos can be resolved because NBC’s Tokyo Olympics coverage suggest an immeasurable potential for live sports coverage in the future.