Listen closely to the sound of the Tokyo Olympics, because there will be a lot of firsts. For instance, the broadcast by Olympic Broadcasting Services (OBS) will be the first in 5.4.1 immersive audio, with four overhead channels adding an upper dimension to indoor events. And, because of last-minute government-imposed COVID restrictions barring spectators from most venues, it will be the first-ever Olympics to deploy some form of artificial crowd noise. 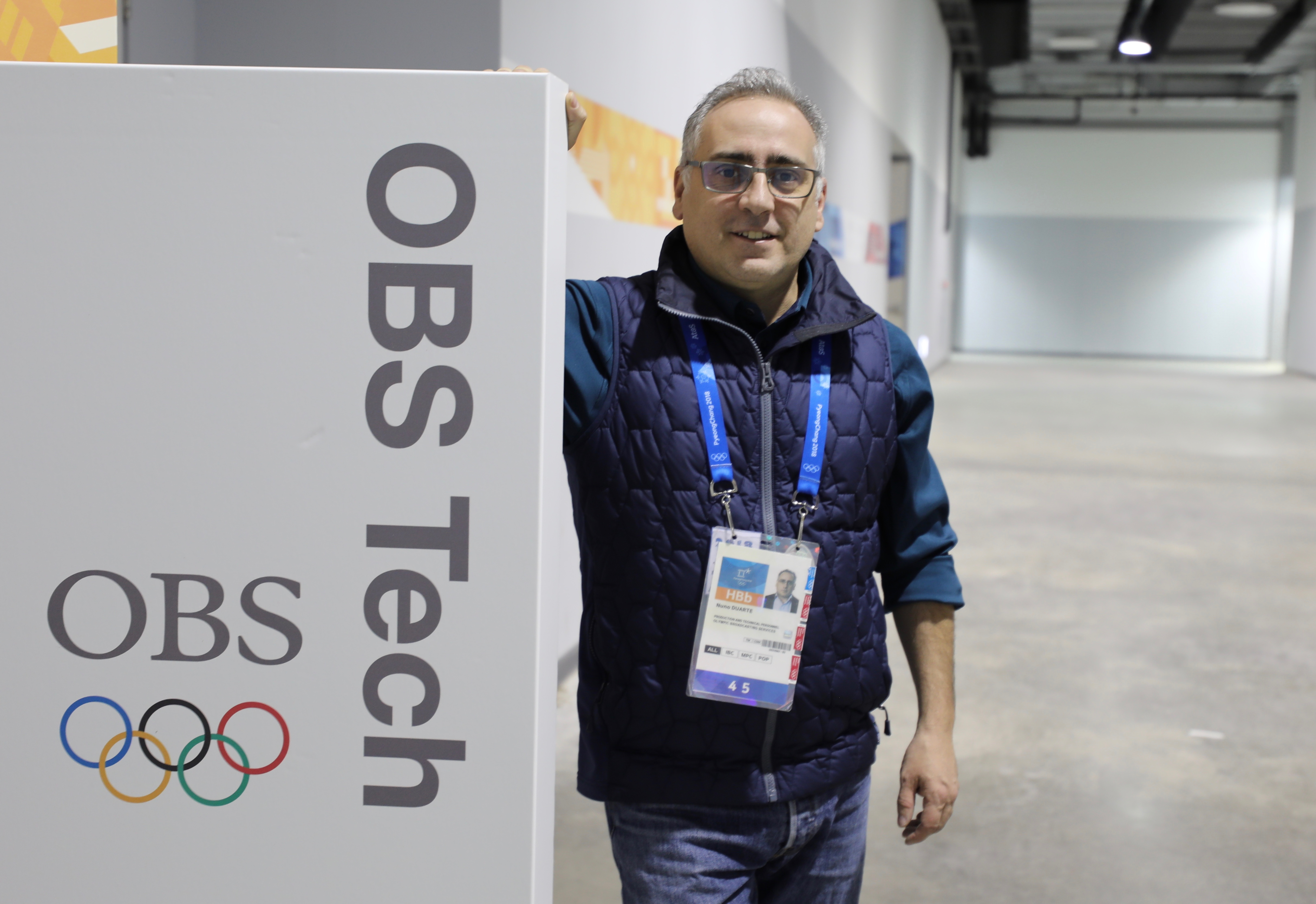 “Immersive sound is our biggest challenge, because it’s new for 99% of the A1s and broadcast engineers,” says Nuno Duarte, senior manager, audio, OBS, from the International Broadcast Center (IBC) in Tokyo.

The OBS production will encompass 42 competition venues, with customized production units and workflows. Overall, OBS will deploy 31 outside-broadcast (OB) vans and 22 flypack systems designed specifically for and outfitted to meet these Games’ new and unique production and distribution requirements.

OBS will capture the sounds of the Tokyo Olympics through an immersive 5.1.4 audio configuration that expands on 5.1 surround sound: an overhead dimension in indoor venues is provided with the addition of four hanging ceiling microphones, whose height will be adjustable based on the venue, and two new microphones — using 4.0 and 8.0 transducer configurations — are designed specifically for immersive-audio production.

In total, OBS will deploy 3,600 microphones in 28 models. Three immersive-audio quality-control rooms will support the venue production and guarantee sonic consistency and quality across all sports. Only the coverage of the seven outside tennis courts will remain in HD. There will also be 46 stereo channels of radio feeds.

Broadcast-rights holders will take the immersive-audio signals from the OBS as a generic, linear, immersive 5.1.4 feed. Broadcasters deploying the Dolby Atmos codec in the U.S., UK, and Europe will encode their broadcasts locally. South Korea’s SDS will broadcast the Games in UHDTV using the MPEG-H format, which can support up to 64 loudspeaker channels and 128 codec core channels, confirmed by the Fraunhofer Institute, the codec’s owner.

NHK, the main Japanese national broadcaster, is scheduled to do an additional transmission using 24 audio channels. This 22.2 configuration is the audio component of the 8K television standard Super Hi-Vision, developed by NHK Science & Technical Research Laboratories. It uses 24 speakers, including two subwoofers, arranged in three layers plus an LFE layer: upper layer with nine channels, middle layer 10 channels, lower layer three channels plus two LFE channels. Super Hi-Vision will be produced from a limited number of venues and for limited distribution.

NBCUniversal, as it did with its broadcasts of the Rio and Sochi Olympics, has announced that it will take live coverage from Tokyo and work with distribution partners, such as parent company Comcast/Xfinity, to deliver the Games to viewers in Dolby Atmos. NBCUniversal Director, Sound Design, Karl Malone confirms that NBC is using Dolby’s Atmos format, which will take the raw 5.1.4 PCM feed from the OBS and encode to Atmos at its Englewood Cliffs, NJ, facility. The process, he says, will work similarly to the Atmos workflow that NBC Sports developed over three seasons of Notre Dame Football broadcasts. “We will build on the OBS base layer and then add our own microphones to it.” he explains.

“This is an unprecedented achievement by OBS to make immersive audio available to every single UHD rightsholder for every venue, every sport, and every event,” says Roger Charlesworth, an independent Atmos audio-production consultant. “This effort decisively brings premium sports audio up to the level of Hollywood episodic and feature content on Netflix, HBO, Disney, Apple, and Amazon.”

Duarte attributes the huge number and diversity of microphones to the wide range of events at this Olympiad. New sports —  skateboarding, sport climbing, karate, and surfing among them — particularly create new challenges for Olympics audio.

“For example, [for] climbing, we’re using a lot of microphones, as you can imagine,” he says. “You have three walls that you have to fill with microphones. We have a lot of new microphones — small shotguns, boundary microphones, new models, instead of the usual long shotguns — and it has been very successful. A big part of the OBS philosophy is to capture the details of the sports. Effects microphones are great for that.”

Some of these sports will benefit from deployment of two new immersive 4.0 and 8.0 microphones developed with the Olympics microphone partners. Divided into upper and lower layers of transducers, these custom mics will allow the Games’ audio technicians to capture conventional horizontal surround and the immersive vertical overhead channels from a single microphone.

“The lower layer is used for 5.1 surround,” Duarte explains. “What the upper layer generates is the third dimension, used for events like the marathon or outside events, where it’s more difficult to create these two layers with several microphones.”

Duarte, who has worked in various capacities on Olympics broadcasts since Beijing in 2008, says this year’s approach to sound design is similar to what he has done in the past: building his sound design with a foundation of venue ambience, including crowds, and then layering effects and finally direct sound atop that — the details, he calls it — and keeping the focus (though not microphones; only some coaches and officials will be wired for sound) on the athletes and the microphones out of the cameras’ way.

“Or at least to be discreet,” he adds. “But I should say that more and more international federations are open to getting the sounds of the athletes or the coaches.”

The Olympics aren’t necessarily known for low-frequency effects, but Duarte says effort is being made to look for and capture as much high-impact sound as possible, such as by placing contact microphones on the water-polo goalposts to catch the sound of near misses.

A few sports, such as golf and cross-country races, will have submixers supporting the A1 mix, the better to gather the full spectrum of effects across distances, he says.

The recent and abrupt barring of all spectators from indoor venues removed a major component of the foundational ambient sound from the Games’ sonic design. That will be ameliorated to some degree artificially. Duarte says implementation of so-called augmented crowd noise will be minimal, limited to prerecorded “murmur” tracks, whose content is derived from archived Olympics event soundtracks. These will play through the venue PA systems and are intended to provide the athletes with a semblance of a venue’s sonic ambience under normal circumstance, but the sound will also be picked up by broadcast microphones and heard by viewers.

“OBS prepared a bank of sounds from past Games to make the athlete feel more comfortable,” he says, adding that OBS has been testing the content and its levels ever since the announcements reducing and then eliminating the onsite audience. “It’s not to be across all the venues, but we have to be consistent across all the venues and all the sports that it will be used for.”

The Ripple Effect of Delay

As if the first-ever loss of crowd noise and the first-time shift to a three-dimensional audio format wasn’t challenging enough, Duarte and the OBS staff are also watching the calendar: the 2022 Winter Olympics in Beijing will begin just under six months after the Tokyo Olympics conclude, creating a massive and unique logistics concern. In fact, the pandemic delay has also shaved a year off preparations for the 2024 Summer Olympics in Paris, which Duarte says have already started, even as the finishing touches were put on the sound for the Tokyo Games.

“You never stop preparing,” he says, pointing out how the pandemic-spurred use of remote collaboration tools like Zoom significantly increased efficiency and productivity. “My colleagues from construction have already started the construction of the IBC in Beijing, so that means that everybody moves from here straight to 2022. We’re already working in Beijing at the same time we are working for these Games. It’s a bit more difficult for us, but we can handle it.

“There are a lot of challenges this time,” he continues. “Immersive audio is new to most of us, and now the situation of no crowds will make the challenge bigger. We don’t see problems; we see challenges, and we also see opportunities. I think we’re going to have a big opportunity here to do a very good exhibition of immersive sound and effects. Everybody’s going to be out of their comfort zone. But it’s going to be good.”