Telemundo Deportes has introduced its team of experts and Olympic athletes who will present the exclusive Spanish-language multimedia coverage of the Tokyo Olympics. This summer, Telemundo Deportes will be presenting the most extensive Spanish-language coverage ever with over 300 hours of Olympic content beginning with the kickoff of the soccer competitions on Wednesday, July 21. 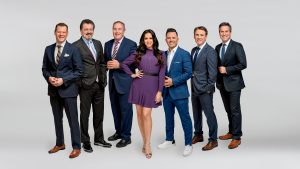 Telemundo Deportes’ extensive soccer coverage will be led by the voice of soccer in the U.S. and six-time Emmy Award-winning commentator Andres Cantor who will be calling the action of select matches from Japan, alongside former Olympian and analyst Manuel Sol. In addition, legendary Mexican goal scorer Carlos Hermosillo and renowned commentators Copan Alvarez, Sammy Sadovnik, and Eduardo Biscayart will also be part of the team calling and analyzing the soccer action.

Emmy Award-nominee Ana Jurka and Emmy-award winner Miguel Gurwitz will host Telemundo Network’s live coverage from Tokyo throughout the Olympic Games, bringing the latest from the host city and anchoring the network’s live coverage every evening throughout the duration of the Games. Tokyo will be Jurka’s second Olympic Games with Telemundo; she has also served as co-host of the FIFA Men’s World Cup from Russia in 2018 and led the Women’s FIFA World Cup from Paris in 2019. Gurwitz has covered Summer Olympics since 2000 and served as the lead studio host for Telemundo Deportes’ coverage of the Rio Olympics in 2016 & the FIFA Men’s World Cup from Russia in 2018.

Telemundo’s recap show that will air every weekday at 1 p.m. ET/PT will be anchored by Al Rojo Vivo’s Jessica Carrillo alongside Telemundo Deportes’ host of Boxeo Telemundo and TYM, Karim Mendiburu, bringing the latest highlights and best Olympic stories of the day live from Telemundo Center. This will be Mendiburu’s fourth consecutive Olympic Games with Telemundo while Carrillo returns to join the Sports team after co-hosting Rio 2016’s coverage.

Telemundo Deportes’ team of on-air talent will be complemented by an unmatched team of experienced Olympic journalists and former athletes and Olympians to enhance the coverage with wide expertise across all sports disciplines. The diverse team of experts include: