Churning out hundreds of clips a day, the team has expanded into a ballroom in a nearby hotel

The Tokyo 2020 Summer Olympics are the largest Olympic Games in history.

By the time the flame is extinguished on Sunday evening, a whopping 339 medal events will have been hosted across 33 sports in 50 disciplines. Compare that with the 43 events in nine sports at the inaugural 1896 Games in Athens, and it’s clear what a behemoth the Olympics have become over the past century.

All that action means one thing for the team at NBC Sports and other Olympics rightsholders across the globe: a heck of a lot of video content to slice, dice, and distribute.

To combat the tremendous challenge of serving up the Olympic Games in the Digital Age, NBC Olympics has operated what it calls the Highlights Factory. The internal operations group has been in place for every Olympics since the Beijing 2008 Games.

The mission of the Highlights Factory is to monitor all the feeds from every live competition throughout the Olympics, while also monitoring, evaluating, and processing all extra material available from Olympic Broadcasting Services (OBS), such as melts, Isos, post-event interviews from the mixed zone, and other ad hoc material. 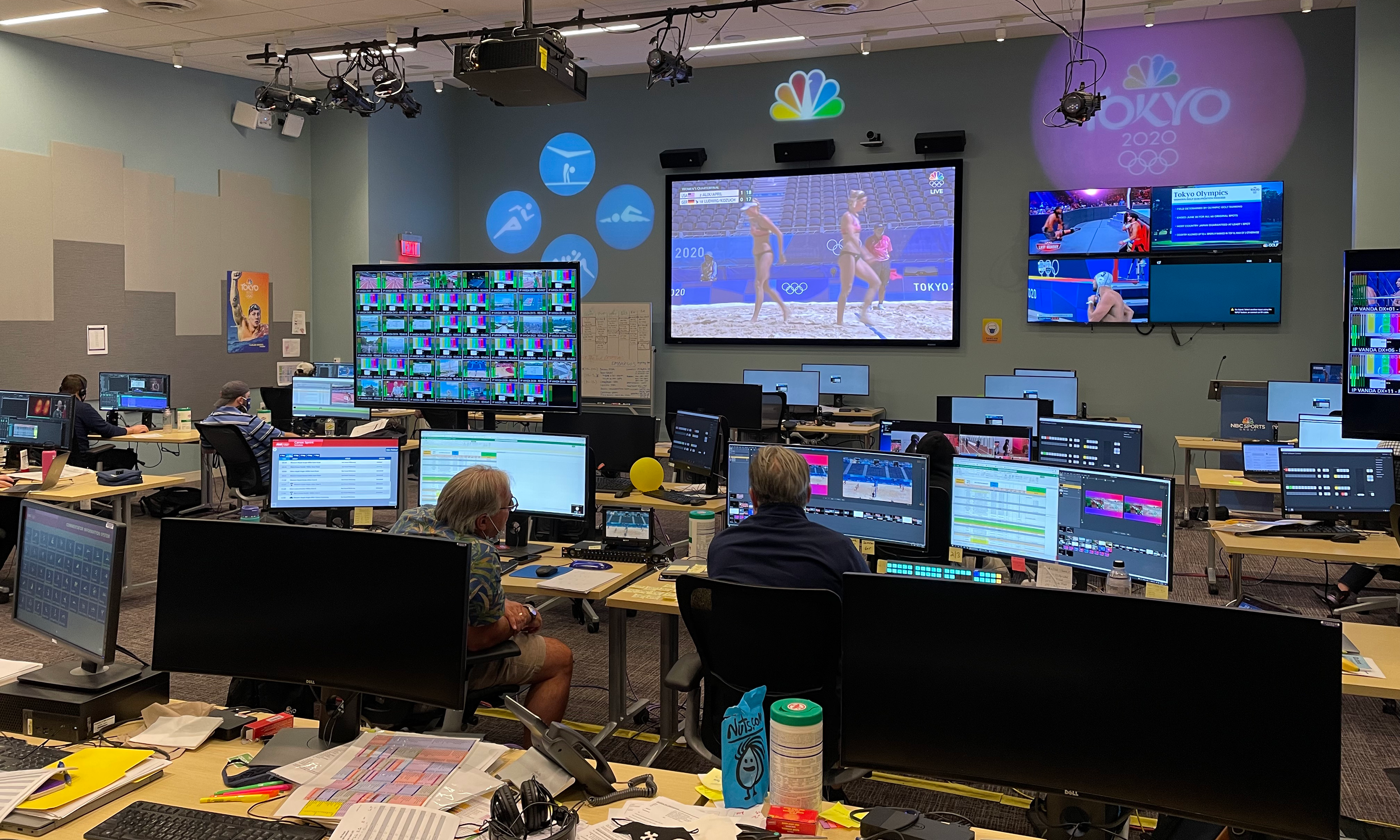 NBC Olympics’ Highlight Factory churns out hundreds of pieces of content per day for various platforms from this space in the network’s Stamford facility, as well as from a ballroom at a nearby hotel.

As one can imagine: it’s a lot. On any given day of the Games, the Highlights Factory team publishes 120-140 video assets. It will process potentially 2,000-2,500 clips over the course of the Games. And that’s not even including a large chunk of small clips that might be passed along to the NBC Olympics social-media team by request.

This year’s Highlights Factory operation has grown so large that it spans two locations. When it debuted in 2008, it was housed in one spot: inside Studio 8H (yes, the Studio 8H of Saturday Night Live fame) at 30 Rock in Manhattan. This year, there’s a sizable space for editors at NBC Sports’ Stamford, CT, headquarters. In addition, overflow space rented in a ballroom at a nearby hotel houses more than 100 editors.

Although the extra space has certainly helped the NBC Olympics team employ more editors and keep the large crew socially distant, it hasn’t been without its challenges. Eric Hamilton, director, digital video production, NBC Olympics, says the Highlights Factory has always benefited from being in a single room, which led to open communication that made it feel almost like the old trading pits on Wall Street. Now more effort needs to go into effective communication and streamlined work.

“Having the team split into two physical locations has had an impact on our internal communications,” says Hamilton, “more than we anticipated. We had successfully spent a year working remotely, so we thought we had that part down. But, in the chaos and intensity of the Olympics, we found that to be a bit of a challenge.”

To help bridge the distance between Stamford, the hotel, and even the team at the IBC in Tokyo, the Highlights Factory crew uses Microsoft Teams to host video and text meetings. Also, Cisco Telepresence monitors allow staffers to see their counterparts in other locations.

The crews are substantial, with Hamilton and Director, Original Programming, Wally Bruckner overseeing much of the overall effort. Approximately 13 preditors (producers/editors) cut nearly 200 highlights from live events on the fly daily. That group is managed by Director, Digital Content Strategy, Jeff Graubart and Senior Editor Daniel Brennan. Shot selectors, of which there are about 34 working in the hotel, identify and cut top and “viral” moments. Producer Elissa Candiotti and Editor Daniel Cuthbert are running point there.

For the Team USA Moments channel, the Highlights Factory team uses three Telestream Wirecast devices connected to streaming encoders to create the round-the-clock Peacock product. The channel, loaded with VOD content, also pops from live stream to live stream to follow U.S. athletes in action. When Tokyo goes dark for the night, the Stamford team switches to programming the channel with a  three-hour loop of Team USA highlights from the previous day or so. The whole channel is operated by two shifts of two technicians, an Olympics programming expert, and a Wirecast operator.

Marvin Pittman, Glen Sanders, Tom Feuer, and Daniyal Khan have collaborated to produce the Team USA Moments channel. Project Manager, Digital Distribution, Laurence Master oversees a team of 15 that manages the distribution of content (both live and on demand) to MVPDs and off-platform partners, such as Peacock, YouTube, Yahoo!, MSN, Apple News, and social-media platforms. Media Assets Supervisor Liz Collins teams with Feuer to oversee an intake/cataloging group of 14 staffers, who manage special feeds and behind-the-scenes content. That group catalogs footage and shares with all NBC Sports Group production teams.

As for the IP-based camera feeds, the Highlights Factory team takes advantage of the fact that NBC Sports is live-streaming every single Olympic event through the help of OBS. It takes raw camera feeds from selected events to build compelling behind-the-scenes and what the team calls “raw perspective” content. IP-based encoders from Haivision are used to pull in raw feeds made available by OBS, and Blackmagic Design switchers are used to customize versions of the live stream for digital and social distribution, when permitted by rights agreements.

Haivision lines were used to tap into selected cameras at eight venues, including gymnastics, swimming, and track and field. Blackmagic ATEM remote switchers in Stamford were used to live-stream or package, for example, an entire race from the perspective of the underwater tracking camera.

“These allowed us to essentially get instant melts to use for postproduced content,” notes Hamilton, “without bothering the venue to feed us material at the end of a long day.

Another key cog in the content wheel is the 14 craft editors. Overseen by Lori Sandrock, this team is responsible for cutting high-end features and sponsored content that helps meet partner needs.

Hamilton also notes one other bit of innovation by the Highlights Factory this summer: an experiment in open-source highlight and footage sharing. The operation is collaborating with other production groups in Stamford, including the Content Command Center, to create highlights that are kept in a central location as open Avid sequences. That way, any production team can access them.