SVG’s coverage of the production of the Tokyo Olympics begins in earnest this week and we kick things off with a series of OBS executive interviews that have been provided by OBS to the media (our team will be on site next week and will interview them in the coming weeks). Below is an interview with OBS Chief Content Officer Mark Wallace. 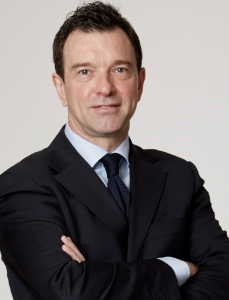 OBS Chief Content Officer Mark Wallace says more than 1,000 cameras will be used to tell the stories of the Tokyo Olympics.

In this role, Wallace oversees the organization’s broad­cast and digital coverage at all competition venues and the Ceremonies, as well as the development of pre-Games and in-Games content. Mark also oversees on-screen graphics, archives and all the Games-time content delivery solutions such as the Multi Clip Feeds, Multi-channel Distribution Service, Digital Content Solutions, Content+, immersive media, and the Olympic Channel News. With nearly 30 years of experience working in media, Mark has specialized in the executive planning and management of major sport events, including five Olympic Games, the UEFA European Football Championships and the Rugby World Cup.

What is the scale of OBS’s broadcast produc­tion at Games-time?

OBS employs about 8,100 broadcast profes­sionals, and the core of our operation is the live sports coverage from each competition venue. We bring in the best venue production teams that the world has to offer to produce that action and I have a group of producers who oversee the various sports and ensure the coverage of every sport is consistent and is of Olympic quality, which is an industry leading standard. We will use a total of 1,049 camera systems for the broadcast of the Tokyo 2020 Games of which more than 210 are slow-motion cameras. We will also have no less than 11 four-point cablecam systems in place, as well as a broad range of other specialty equipment.

Aside from what we see on television, what else does OBS deliver?

We now have other feeds coming out from some of the venues, notably the Multi Clip Feeds (MCFs) which run simultaneously with the main coverage and offer unseen angles from point-of-view (POV) and super slo-motion cameras, and all our specialty systems. They help RHBs tailor their own programming with enhanced analysis. There will be 75 multilateral feeds and 28 MCFs coming from the venues in Tokyo, which represents a huge amount of content distributed to the RHBs through a 48-channel VandA package and an additional 28-channel VandA+ package. For the first time, we have native UHD HDR production, with 68 multilaterals distributed in a specific VandA package consisting of 44 channels.

Who are the venue production teams respon­sible for executing the OBS production plan?

To execute our coverage plan, we bring in expert venue production teams with extensive knowledge of the sport. These teams are either freelance professionals or come from broad­casters who are our RHBs. Notable examples are NBC, the US rights holders who will provide expertise in Golf, Sky New Zealand for Rugby Sevens, China Media Group for Table Tennis, Badminton, Gymnastics and Sport Climbing, and Japanese broadcaster NHK who will assist with Judo and Karate. We work with these teams to place the cameras and micro­phones, to adjust the lighting, so as to ensure the coverage will be of a very high standard. As one of the industry leaders, Japan provides a high level of local expertise, so in total nine venue production teams are from Japa

What innovations has OBS made since Rio 2016 and PyeongChang 2018?

The continued expansion of the MCFs is a response to RHB requests. For Tokyo 2020, most of the sports will have a MCF. The RHBs will be using these in their studio for analysis and for making music clips and transitions.

In selected sports, we will also be delivering multi-camera replays where the image freezes, and the viewer moves around the action. We have utilized these before, but never as exten­sively as we will in Tokyo. Such production enhancements are ideal for analysis because you can now see something on the multilateral feed that you couldn’t before. For example, we can freeze the athlete in mid-air and see the exact body shape of the athlete. It has a definite “wow” factor.

We will also be employing Intel’s TrueView system in Basketball which can utilize virtual cameras to allow the viewer to move into the venue and make if feel like being on the field of play and part of the action, alongside their favorite athletes. This will enable better story­telling as replays will have more angles and then of course there will be more data for viewers to access than ever before. We will capture more data on the athletes’ performance, so the viewers will have access to additional informa­tion, enabling them to have a more complete understanding of the action.

We are also excited to partner with Intel and Alibaba to bring the next era of technology by enhancing the viewing experience for the Athletics sprint races. Relying on 3D Athlete Tracking technology, we will be able to reveal never-before seen insights into athletes’ velocity and acceleration, and how they perform against each other. The technology can convert that data into visual overlays which can be broadcast over replays, providing commentators with a great tool for analysis and further fan engagement.

There is a unique phenomenon with the tele­vision audience for an Olympic Games. Many are what I would call the Olympic viewer. They are someone who doesn’t usually watch a lot of sport and they decide they want to watch the Olympics because of the storytelling, narrative, and personalities. Our job is to entertain, inform and educate the viewer, engage them, and keep them interested in sport and the story.

How much is the work of the host broadcaster about storytelling?

The Olympic Games are not just about sport, they are about humanity and emotion, stories and narrative, and this aspect is something I look forward to at each Games.

The goal of OBS production is to tell the unique and inspiring stories inherent to each athlete’s performance. Athletes are always at the heart of our coverage and conveying their emotional journey to the fans at home is at the forefront of all our efforts. That’s our job to get these emotions and stories through the screen to audiences around the world.

What is the impact of using UHD HDR cameras for the first time?

They will offer more depth of field and the resolu­tion of the image will certainly improve so pictures will feel more real. In terms of the image and how the image looks, UHD HDR will definitely make a difference. For capturing the nuance of facial expression, you can’t beat UHD. It is a significant technological advance.

In terms of storytelling, I don’t think it has much of a bearing, this comes from the venue produc­tion teams knowing the sport they are covering, knowing the storylines, who won gold in the previous Olympics, who is the current world champion. Our editorial line, the content and how we cover things won’t change greatly, only the methods we use to tell a story.

How have you prepared for the five new sports?

We want to make their coverage the best it can be. The production teams we have brought in have great knowledge and expertise, and we have been working closely with the respec­tive IFs to see for instance if we can put POV cameras or microphones on the athletes or referees to bring a more immersive experience to the viewers. With Sport Climbing, we will offer a virtual 3D animation of the wall to see how the holds and the wall’s varying angles look. We will have four-point Cablecam systems at BMX and Skateboarding.

The job of our producers and directors is to tell that story to someone who may never have watched that sport. We need to present each of these new sports in an informative yet exciting manner. The graphics need to be immediately understandable and once again, good story­telling is essential.

How has OBS embraced virtual reality?

We have been experimenting with VR since 2016. In Tokyo, we are offering a live VR app solution for RHBs where the user will be able to cut around the cameras live and take a 180° and 360° look around. We’ve chosen sports where we can place these cameras on the field of play, or in places that provide the viewer with a unique position and experience. A viewer may find themselves in a location they would not even achieve as a spectator in the venue. At gymnastics, you will be right at the heart of the action, on the field of play, surrounded by the athletes and the apparatus. We also offer the curated feed, cutting the VR cameras and telling the story.

For the first time, we also have been filming some pre-Games content around the host city and athlete build-up in different countries for our VOD service that will provide VR features. We plan to fix cameras onto athletes during their training sessions when we will be able to record that performance for VOD and give the VR user the chance to feel what it is like to be an Olympic athlete. VR is an immersive experience, not broadcast television, and that is how you have to think of it.

Where does digital and social media fit into the output produced by OBS?

More and more people watch the Games via streaming on their tablet, smartphone or laptop. These are the new viewing methods. Demand for more digital and social media content has exploded over the last decade. We had to expand our offering and drive new content production and distribution models for digital. Our Olympic Video Player, digital content components and Content+ service have been specifically designed to help RHBs with their digital strategy.

People still like to watch sport live. They like to watch it together and it is generally a communal thing. They like to watch it in the traditional form, on a television, but the amount of younger people watching on their mobile devices is increasing greatly. With broadcast, the RHBs control what the viewer watches; with digital, it is more interactive. Digital offers something classical TV sports does not: audience participation. You may want to have access to data or watch some features that are connected to an athlete you are watching live, and you can do that on digital.

Nowadays production is also about developing interaction, bringing communities together and keeping the audiences engaged. To assist the RHB digital and social media teams in Tokyo, OBS will have dedicated teams that will move between Olympic venues and film social-first, short-form content from their smartphones. These give viewers a behind-the-scenes glimpse of the Olympic Games and allows for a deeper Olympic experience.