Launching a new multiyear rights deal with Fox Sports this weekend, the National Hot Rod Association (NHRA) will officially take control of its own on-air destiny by bringing production operations in-house. Fox’s NHRA TV package, which kicks off Sunday with three hours of live FS1 coverage from the Circle K Winternationals Finals in Pomona, CA, is highlighted by 17 live telecasts, including four on Fox — the first time NHRA will appear live on a national broadcast network. 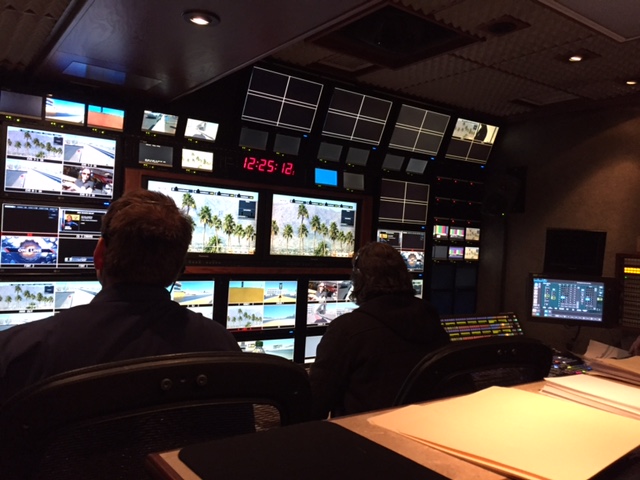 “We really think [televising a majority of the events live] is going to transform the sport,” says Ken Adelson, VP, broadcasting and digital content/executive producer, NHRA. “Being live allows you to build up the drama and storytelling, [and] you can’t effectively utilize social media when you’re in tape delay. That’s obviously a huge part of our overall plan. We’re hoping that four shows on the Fox network will reach fans that have not had the chance to experience this sport, get them interested, and bring them back to grow the audience on FS1.”

Flipping the Switch on Live

After a rehearsal event in Phoenix last weekend, NHRA’s production goes live this weekend on FS1, presenting qualifying races for the Mello Yello Series on Friday and Saturday, as well as the 17 live telecasts of the elimination races Sunday on FS1 and Fox (the others will be shown in tape delay on weekend afternoons or in primetime).

That compares with just five hours of live coverage on ESPN last year. In all, Fox, FS1, and FS2 will combine to present more than 450 hours of programming, including coverage of the Lucas Oil Series, J&A Service Pro Mod Series, and repeats of Mello Yello Series races.

Coverage for all Series Friday-Sunday will be produced out of F&F Productions’ GTX-8 single-expando mobile unit, the former Crosscreek Productions truck that worked ESPN NHRA productions before F&F acquired the company last summer. The production team is a mix of those who worked on ESPN productions (12-15 at key positions) and a crop of fresh talent new to drag-racing coverage. 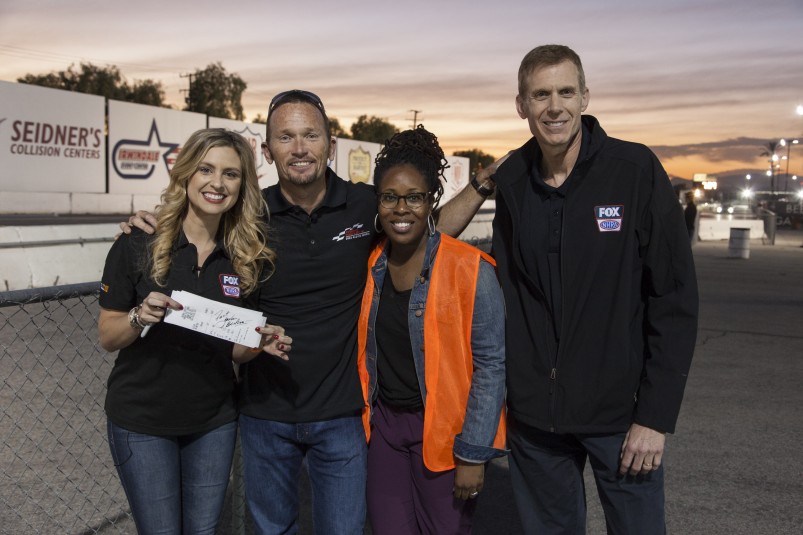 “Since different [Series] races are interspersed throughout the day, the truck and the production crew will record all of it — [talent] will do live calls over most of it — and then assemble it into the qualifying show for [FS1] on Friday and Saturday,” says NHRA Technology Executive Mike Rokosa. “The camera complement for Lucas Oil and Mello Yello will also be relatively the same. Then, on Sunday, we will come on the air live with the opening, and off we go.”

This weekend’s production will deploy 16 cameras (not counting in-car/on-board units), although Adelson and Rokosa say that will likely change throughout the season as they evolve the coverage.

Rather than deploying robotics at the start line as has been the case in recent years, NHRA has elected to bring back handheld cameras this year in order to “get a much more intimate view where you can get literally in the driver’s eyes and really bring viewers to the start line,” according to Adelson. 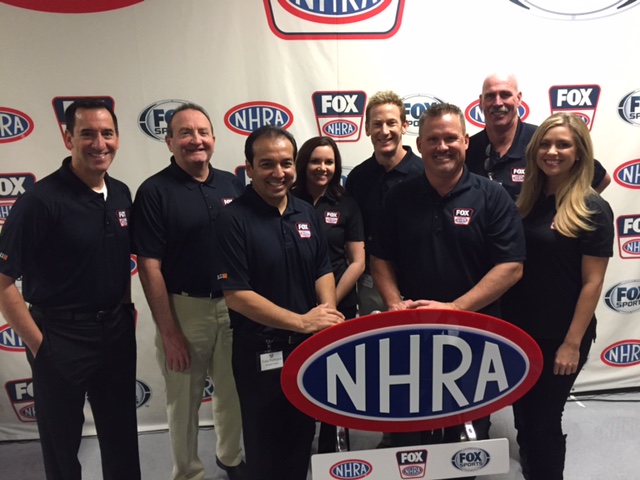 Also new will be a high-angle “game camera” located 50-60 ft. in the stands at the halfway point of the track to capture the entire track — an angle that did not exist previously, according to Adelson.

Few, if any, sports TV properties rely as heavily on high-speed cameras as drag racing, considering that cars hit speeds of more than 300 mph and races usually last just seconds. This weekend’s coverage will feature a Vision Research Phantom V642 (capable of 2,500 fps) at one of the two finish lines (for varying Series).

“We are experimenting with a lot of different things for high-speed,” says Rokosa. “Depending on how things go this weekend, we will determine what to do to potentially augment that for future races. We are hoping, if everything works out right, to add another at the other finish line.”

“In-car will be similar to what has been done in the past, says Rokosa, “but our hope is that, being live, there will be an opportunity to place more in-car cameras and will be able to increase the number we use as the season goes on.”

The television-production team will share camera feeds with the NHRA Event Entertainment group, which produces the in-venue videoboard show, and will be able to integrate the group’s wireless RF fan cameras into telecasts.

NHRA Gets Virtual With Graphics
New to Fox’s NHRA coverage this year will be the Sportvision virtual graphics displaying the start and finish lines and identifying drivers in their respective lanes with virtual name-and-sponsor graphics on the asphalt in front of the car. Sportvision virtual graphics will also allow NHRA to visually illustrate split times to compare drivers’ runs (similar to in Olympic swimming when a virtual line shows how far a competitor is trailing the leader in a race). 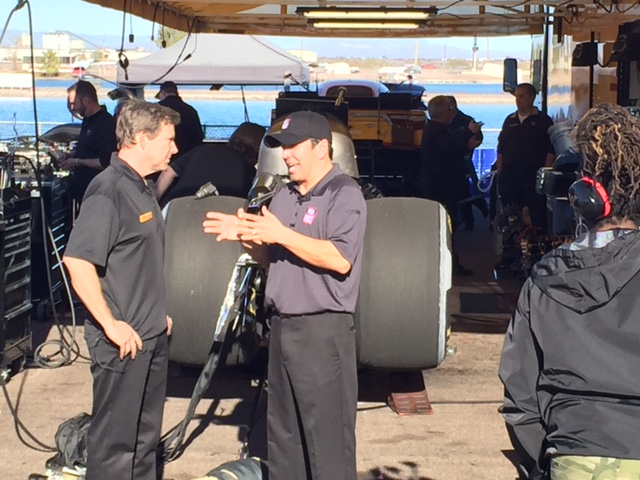 “One of the things I noticed when I first started watching is, there’s really no true finish line that you can see on the track,” says Adelson. “But we can’t paint the line on the track because tires will potentially spin and it will rub off anyway. So the next thought that came to mind was virtual graphics: we [could] create a line similar to the first-and-10 line.”

Fox Sports connected Adelson and company with Sportvision, and the production team plans to use virtual graphics extensively in the telecast each week.

“Nobody watching knew where the start and finish line was,” says Rokosa. “We will have a virtual line that will show exactly where the finish line is, so it’s going to make photo finishes look very impressive, and the viewer will know exactly when they cross that line. We are having fun with that. It’s challenged us to find good camera angles to make all that work.”

The Fox Sports Look
A brand-new graphics package and music theme created by Fox Sports for the new NHRA package boasts plenty of the hard-hitting look and sound that viewers have come to expect from Fox.

“Fox took our input and created an absolutely terrific graphics package and music-theme bed,” says Adelson. “They really did a major-league job for us, and I think, when people see that, it will help elevate the entire [property]. That was extremely important to us.”

Storytelling, Delays, and a Beginning, Middle, and End
In addition to presenting the Sunday elimination races live, Adelson has put a focus on giving the telecasts a true beginning, middle, and end. Although there will not be a pre- or post-game show this season, the telecasts will start off by setting the stage for that day’s competition and finish with a true awards ceremony, which was not previously presented on TV.

“We’re trying to make the whole day feel like it’s a complete show,” says Adelson. “The first 10 minutes of the show, as opposed to just going into the races, we’re going to set up what’s happening: where are we, why are we here, what’s going to happen today, and who are these people?

“At the end,” he continues, “we are going to end the last race about 15 minutes before the top of the hour and take that last 15 minutes of the show to stage an awards ceremony to bring the champions from each division up on stage and get them out in front of the TV audience and in front of the fans there. We’ll broadcast that within the venue as well.”

The biggest inherent issue for NHRA in transitioning to a live-telecast model is the potential for delays, a regular occurrence given safety concerns over rain and oil on the track. In addition to preparing a full arsenal of features and content to present during these delays, the NHRA is working closely with teams and their technology partners to try to minimize the oil on the track and other potential causes of delays.

“It’s definitely something that was very carefully considered because they do happen often, but the tradeoff to be live against these potential delays was an easy decision,” says Adelson. “The teams have been incredibly receptive to try to come up with solutions because they are very excited about the TV [exposure] and they realize that [delays] make it rougher for the TV [production]. But delays are going to happen, so we just have to be ready with features that are not filler but are really meaningful.”

Watch www.SportsVideo.org for A New Era for NHRA, Part 2, focusing on how NHRA is building out a full production operation and new production facility in Glendora, CA, and a news bureau in Indianapolis.