NBA Digital has added new statistics to its NBA App to give fans around the world more in-depth information about their favorite teams and players. Upgrades to the NBA App include the addition of a “Totals” tab in the Leaders section.  Fans can now switch between season totals and per game averages for league leaders in multiple statistical categories, including points, rebounds, assists, field goals, three pointers, free throws, blocks, and steals.

As part of the Defensive Impact page within the Player Tracking section, the NBA App has introduced new defensive statistics such as field goals made and field goal percentage while defending at the rim and blocks per game in those situations. 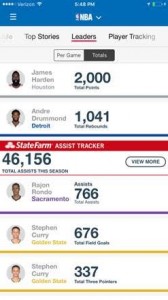 The NBA App has 35 million downloads with visits up 17% this year.  As part of the app’s integration with NBA LEAGUE PASS, fans have direct access to the subscription service’s offerings, including NBA SINGLE GAME and NBA TEAM PASS – which were introduced for the first time this season – as well as an upgraded dashboard.

The NBA App also gives fans the opportunity to set up customized notifications for league, team and player milestones in real time throughout the season.  Fans can choose from several notification options such as “Close Game” and “Triple-Double.”

The NBA App is part of NBA Digital, the NBA’s extensive cross-platform portfolio of digital assets jointly-managed by the NBA and Turner Sports, including NBA TV, NBA.com, NBA LEAGUE PASS, NBADLEAGUE.com, and WNBA.com.