The union between Major League Baseball and the National Hockey League reached another milestone this week when NHL Network debuted its new studio set, called “The Rink,” just in time for the opening of the 2016 Stanley Cup Playoffs. With a back wall LED display measuring 12-feet high and 20-feet wide and a robotic camera setup that positions three cameras on a track system, the set promises to take the network into its next chapter. 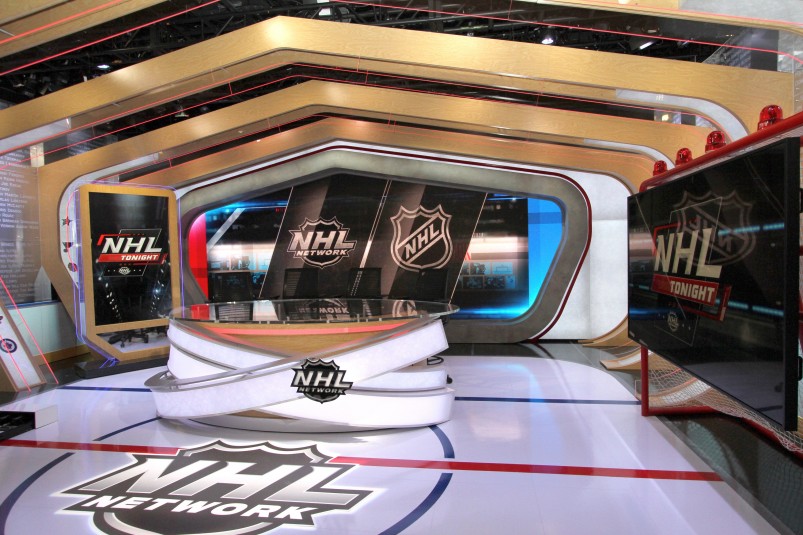 “The Rink,” NHL Network’s new studio debuted in time for the start of the Stanley Cup Playoffs.

“We’re excited,” says Susan Stone, SVP, Operations and Engineering at MLB Network. “[This season] has been a process and we have gone through a lot of changes with new talent and programming. So this was the next logical step to make sure that the NHL had its own home.”

The 1,200- square foot space is housed in a studio facility that was built out in 2015 at MLB Network’s home in Secaucus, New Jersey. Four arches line the ceiling that are each 30-feet long and 14-foot studio walls are designed to look like the Stanley Cup with the names of the last 10 champions etched into it. In front of the LED wall is a 10-foot wide studio desk. To the right of the set is an additional 98-in. video monitor that is mounted inside a 7-foot mock hockey goal.

“We all fell in love with LED technology and the vibrancy and richness it offered to Studio 21 and we wanted to take that with us into The Rink,” says Stone. “It gives a wonderful backdrop to the desk and gives us so much flexibility of hat we can put in there. It gives us a dynamic look and really changes how the studio feels and looks depending on what’s in that wall.”

An All-Star team of television studio specialists, including many who have been longtime friends of MLB Network, worked to get the studio up and running in time for the playoffs. Bryan Higgason, who has designed sets for MLB Network back in his days with Jack Morton Worldwide and Clickspring Design, designed “The Rink.” He now owns his own company called HD Studio. FLDA’s Bruce Ferri, a winner of two Sports Emmys for his work with MLB Network, provided lighting design, while blackwanut fabricated the set, while AV Design Services (electronics) and The Systems Group (engineering) served as the integrators. 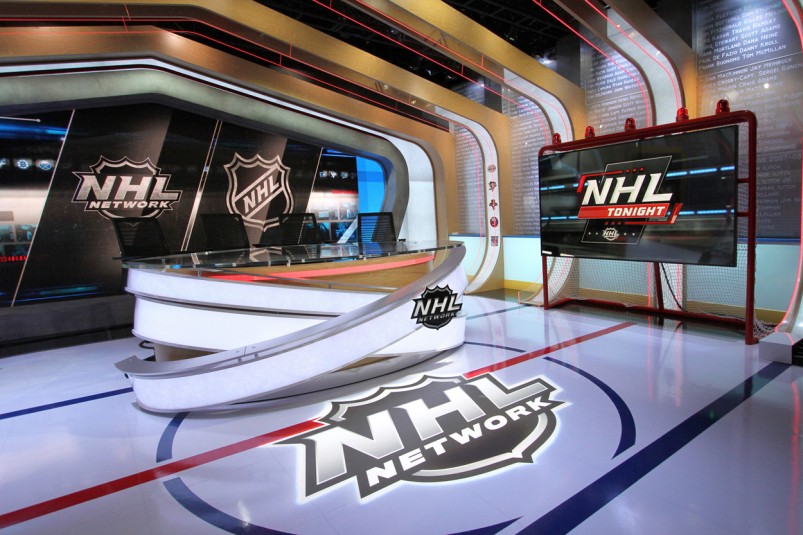 “I think we are known at MLB Network for how our product looks on the air,” says Stone. “We have any amazing creative services department and the expertise and vision that they bring, I think, stands alone. That has certainly has been a great positive for this launch.”

The Rink is connected to a new control room, PCR-3, that was completed earlier this year. The control room is built around a Grass Valley Kayenne K-Frame switcher, a Calrec Appollo audio console with Hydra2 network, and a Vizrt graphic infrastructure. Also in PCR-3 is the Grass Valley nVision router with Kaliedo multi-viewer, Ridel VoIP intercom expansion, Ikegami hi-res monitoring, Tektronix rasterizers, an Image Video tally interface, and EVS XT-3 and SpotBox servers.