For more than three decades, The Studio-B&H has been an NAB Show stalwart, using its Central Hall location to show off the latest gear for broadcast professionals. This year, however, the company didn’t just show off the gear but, rather, showed what the gear could do through a series of live panel discussions from its in-booth stage.

Over the course of the show, The Studio-B&H streamed 32 events, including technology demonstrations, in-depth presentations on industry trends, and panel conversations that explored broadcasters’ present challenges and future opportunities.

“It was a tremendous success,” says Michel Suissa, manager, professional solutions, The Studio-B&H. “[We] showed that we have the technology expertise to be players in the market for our customers, and, if they come to us and say we need solutions that revolve around multicamera solutions and streaming in a live environment, we thought that it was well worth the effort — especially for our sports-broadcasting partners, who come to us for a number of different solutions but not necessarily for live production.”

The Studio-B&H live-streamed every presentation directly to its YouTube channel using three Sony PTZ cameras, a NewTek TriCaster, and Teradek Slice. Approximately 20 minutes after each presentation, videos were uploaded to The Studio-B&H’s NAB Show Live page for on-demand viewing. 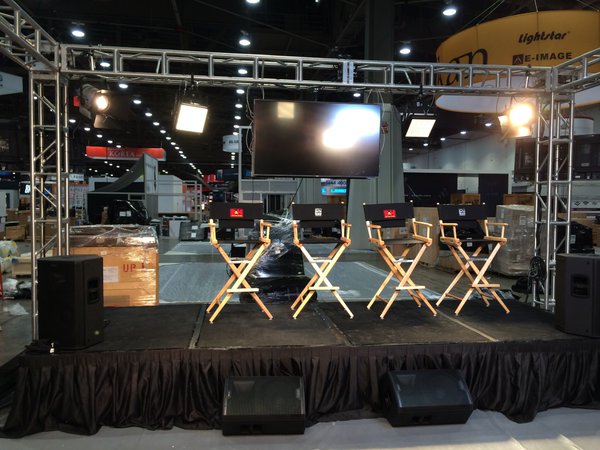 The Studio-B&H live-streamed presentations from its booth at NAB 2016.

“VR is just exploding, and we’ve been in the forefront of that explosion,” says Suissa. “The value of that [panel] was the fact that we had three different perspectives: one from a manufacturer, one from a producer, and one from a client. I think that taught us a number of things. One is, it appears that VR is definitely here to stay and has tremendous potential for sports broadcasting.”

For The Studio-B&H, the event opened a new way for the company to engage with its customers at NAB 2016, not only by showing the capabilities of its technology but by sparking industry discussions and demonstrating its broadcasting expertise.

“I think what people are a lot more interested in these days is learning from people who actually experienced what they’re trying to accomplish themselves,” says Suissa. “That’s what we’ve discovered: the power of education and the channels that educational information can [travel] from professional to professional. I think it’s really an incredible tool to engage people who attend NAB.”