Few terms fit as well together as “Red Bull” and “excitement.” For “Chain Reaction”, which chronicles eight-manned flight disciplines in one video in real-time, the ambitious Red Bull Media House production team wanted the spectacular footage to be cinematic, but also to transfer the excitement of being airborne to the audience – so they decided to shoot with Cooke Anamorphic/i lenses. Shot in December 2015 against the backdrop of the Fisher Towers in Moab, Utah, the idea for “Chain Reaction” came from John DeVore, Red Bull Air Force captain and aerial stunt coordinator for films including “Transformers 3” and “Point Break.” As an expert in aerial acrobatics, John was asked a simple question: “Given no limitations [okay, reasonable limitations], what would the next big human flight video?” 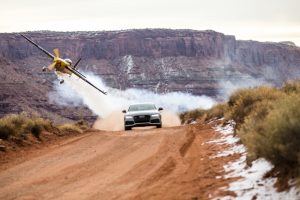 The answer would prove to be as complex as the question was simple: do the biggest and most technical flight video but do them all together, in sequence. That meant putting all of the aspects of the Red Bull Air Force in one incredibly tightly timed and executed sequence: proximity aircraft flying, aerobatic aircraft flying, wingsuit flying, skydiving, high-speed canopy flying, high-speed formation flying, proximity wingsuit flying, and base-jumping.

Director Nicholas Schrunk and DeVore worked out the concept. It would go beyond what had been shot before in aerial sports, showing scope, size, and unprecedented speed — with the goal of showing the environment the way the athletes see it. That meant shooting anamorphic.

“When shooting small bodies at over 100 miles per hour, there are not a lot of choices,” says Schrunk, who is a former DP himself. “We would have key shots, helicopter gimbal and POV shots, plus wingsuit/parachutes following the action.”

But an issue facing Schrunk and DP David G. Wilson would be to maintain continuity between all of the cameras being used. 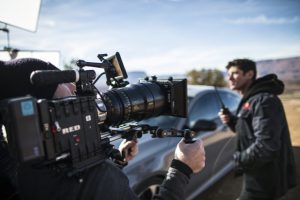 Red Bull’s Chain Reaction producers went for a different look for their production with the help of Cooke lenses and RED Digital cameras.

“I wanted a real, cinema full frame sensor with extra width for anamorphic that could ride on someone’s head while traveling at, literally, breakneck speeds,” adds Schrunk. “That’s why we went with the RED Weapon and RED Dragon for our hero cameras. The RED sensor is roughly 16:9, so shooting full frame 3.89 anamorphic, we would throw away some detail on the side, but without having to crop. Plus we got the dynamic range and resolution of 6K raw.”

Schrunk and Wilson, who had worked together on-and-off over the past eight years, wanted a modern anamorphic that would work properly in the environment of the Moab. Schrunk is a long-time user and fan of Cooke primes for other work for Red Bull Media House and a feature-length adventure documentary. He was keen to try the Anamorphic/i set, and was not disappointed.

“I love the Cooke anamorphic look,” he says. “You still have a sharp image with very little distortion so you get a natural looking image. Everything looks real and tangible. Older glass has too much of a look and are not sharp…the lens distracts from reality — Cooke lenses take reality and add to it, especially with skin tones.”

“The Cooke Anamorphic/i lenses gave us all the advantages and aberrations of a modern anamorphic lens, as well as the ‘Cooke Look’ and the affects you get when shooting wide open with minimal edge distortion and flare,” agrees Wilson. “They’re really organic looking, especially when shooting digital.”

“We had real problems with extreme high desert cold,” adds Schrunk. “We were in the elements, real run-and-gun style shoot, being pelted with rocks and dust, and not really properly protecting everything with each shot. But we had no issues with mechanics of the Cookes — they’re tightly sealed and superbly constructed.”

While most sports are shot with zoom lenses, in all but one case the RED hero cameras were equipped with Cooke Anamorphic/i prime lenses. “We really wanted a shallow depth of field of 2.3, zooms are close to the 4 range,” explains Wilson. “We also didn’t want an X-Games look, but an organic motion picture look. We shot 85% of the time wide open at 2.3, with 4.5 for a few shots — like when we shot through the car to also capture the helicopter.”

While an Angenieux zoom lens was used with the helicopter gimbal, both Schrunk and Wilson would have preferred the new Cooke 35-140mm Anamorphic/i zoom, but that would not be available until the summer of 2016. “I would have loved to use the Cooke anamorphic zoom, especially in conjunction with some of the longer [180mm and 300mm] primes,” says Schrunk.

All of the shots were planned with safety in mind, but every sequence would be captured in a single take for authenticity and continuity. These created big logistical issues when considering which shots were needed and what cameras would capture them. “When we could use a prime lens we did,” adds Schrunk. “You can’t always use primes in sports because the zoom assists you with composition, but when you can, you get the best, most beautiful shots with all the little nuances you want.”

The Cooke Optics lens package for Chain Reaction included 25mm, 32mm, 40mm, 50mm, 100mm, and 65mm MACRO. Wilson used the 32mm as the widest, finding it the best for straight edges and keeping the subject in frame with big landscapes.

One of the issues that Wilson had to face was that much of the footage would be unmonitored while being shot. “David understands the limitation of what can and cannot be controlled,” says Schrunk. “And he’s got the best eyes of any DP I’ve worked with. He knows the technical tricks you can do with lighting and filtration, and he knows how to work with the athletes on how to get the shot.”

“The crew would handle POV camera mounting knowing the angles we wanted…you hope for the best and see what you get,” adds Wilson. “Never trust that you’ll get exactly what you need or know if you’ll get the shot at all, so we shot from two or three different angles to hopefully capture what we needed. Plus, we used a lot of ND and anamorphic filters on the GoPros to get the look that matched the RED/Cooke packages the best that we could.”

The manually-operated cameras were a one take deal, so they were locked down and ready to roll, with no chance for a second take. That put the pressure on the very talented operators and technicians on the shoot, and the director.

“Nick is a very technically savvy director,” says Wilson. “He knows cameras and lenses, and he’s a talented photographer and cinematographer. It’s my job to take the weight off his shoulders with the details of the camera settings and operation. During the shoot, we were each managing different crews, but with the same vision for the piece. We each knew what lens went where, where the MōVI and drone were being used, so there were never any questions when it came time to divide and conquer.”

“I also wanted to specifically call out the athletes and stunt coordinator Jon DeVore for actually putting this all together and working with us,” adds Schrunk. “Talent worked as part of the production team during pre-viz, scouting – everything to get the job done. We were all collaborators on this project.”