InfoComm 2016 Officially the Largest on Record 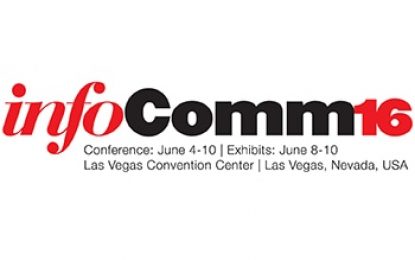 Attendees registered for more than 12,000 seats at InfoComm University sessions throughout the week, more than double the number engaged in training and education in 2015. Approximately one-third more unique attendees took InfoComm University training at InfoComm than in the past. The spike in training interest was driven in part by the 2,620 seminar and workshop packages sold. InfoComm 2016 was the first time attendees could pay one price and take any of more than 100 courses during exhibition days.

“The AV industry’s commitment to advancing technology and showcasing it at InfoComm has never been stronger,” said Jason McGraw, CTS®, CAE, Senior Vice President of Expositions, InfoComm International®. “The market is constantly changing and we’ve been pleased to introduce new features at InfoComm, such as drones, the Internet of Things, and content creation and streaming, which reflect the dynamic nature of commercial AV. In all, 91 percent of space was rebooked for next year, demonstrating exhibitors’ strong commitment to the show.”

InfoComm 2016 welcomed more than 38,833 visitors, 4.8 percent more than the last time the show was held in Las Vegas, affirming its continued strength as the best-attended annual conference and exhibition for AV buyers and sellers in the Western Hemisphere. More than 35 percent of attendees were visiting InfoComm for the first time.

“This is a thriving, growing, busy industry — especially this time of year — and the fact that so many professionals continue to gather in one place, including new faces and dedicated InfoComm attendees, underscores the important role that the show plays in the success of their businesses and their careers,” said David Labuskes, CTS, RCDD, Executive Director and CEO, InfoComm International.

InfoComm continues to grow as a critical venue for professional development and certification. A record 252 attendees registered to take a Certified Technology Specialist exam during InfoComm 2016 and 186 received their certification. Certified professionals earned more than 30,000 renewal units toward maintaining their CTS credentials through continuing education.

Many of InfoComm’s growing member councils met at the show. Year-to-date, InfoComm International has welcomed more than 750 new members in North America — double the rate of a year ago. Membership renewals in the first half of 2016 are up almost 40 percent compared to the same time in 2015. InfoComm membership in Europe has climbed 17 percent year-over-year, and overall membership outside the United States has grown 12 percent year-to-date. Up to 20 percent of InfoComm show attendees travel from outside North America to take part.