While the history of a sports franchise is built out of memorable moments, key wins, and unforgettable players, its story is told through video. And yet, despite the value of historical video content, many franchises at some point have left these assets to languish on deteriorating tapes in unorganized offices without any discernible management strategy. 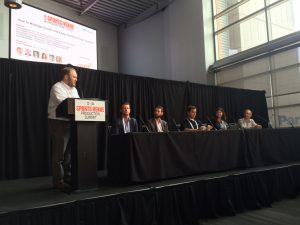 At SVG’s Sports Venue Production Summit in Philadelphia, the challenge of managing assets and keeping control of your franchise’s content was best summed up by Baltimore Ravens Director of Broadcast and Gameday Jay O’Brien: “Ray Lewis is still our most popular player, and his first interception was sitting somewhere on a shelf.”

This was before the team streamlined its media-asset–management (MAM) system last year. Prior to the 2015 season, the Ravens invested in a variety of solutions from Quantum, Levels Beyond, Telestream, and Adobe to help them manage two decades of valuable video content.

“As we got closer to our 20th season, [with] footage from 1996 logged poorly and manually, we just basically lost track of our assets,” he explained. “Needing that MAM system so editors can spend time editing and producers can spend time producing instead of scrolling through data tapes for a couple hours to find the shot they were looking: that’s really what forced us to do it.”

The Ravens took their cues from the Philadelphia Eagles, who worked with Chesapeake Systems in 2014 to install Reach Engine by Levels Beyond as the workflow-automation platform at Lincoln Financial Field — which hosted this year’s Sports Venue Production Summit — and the team’s NovaCare Complex, tying the two together.

Prior to the installation of the MAM, Philadelphia Eagles Digital Asset Manager Jennifer Terbosic faced the constant challenge of content’s getting corrupted or lost. In addition to centralizing and organizing years of valuable assets, she has saved countless hours by transitioning from manual transcoding to automatic.

“If you’re looking for ways to show your team [how you can get ROI from a MAM installation],” said Terbosic, “you have to quantify all the time that was spent before you got a MAM.”

However, investing in a state-of-the-art MAM system is all there is to managing your assets and taking control of your content. The panelists urged a consistent yet flexible approach to metadata logging. Every year, said Terbosic, her team revisits the metadata fields used in logging assets.

“We look at what metadata worked, what didn’t, what people are searching for, what they’re not, to determine the metadata [we’re using] and what needs to be added,” she said. “Metadata is organic, and it grows and changes constantly based on new content that may be coming in. … You want to be able to keep up with it and make changes as needed.”

Vizrt VP, Business Development, Craig Laliberte raised a similar point about the importance of metadata logging. “One of the themes that we’re seeing is metadata and using that metadata to deliver those assets to different areas,” he said. “It’s no longer using a MAM just for archive; you want to use a MAM to make it searchable, so that you can use it for broadcast, for social media, for all the different aspects of your production to help improve workflows. Having a MAM brings that all together.”

A common theme throughout the discussion, metadata isn’t just connected to content. Metadata is content: without it, content has no context. The panelists also urged attendees not to get overwhelmed by the complexities of MAM installation or the decision on how much metadata to include with each asset.

“One of the first things that we do when we start a project with a team is [figure out] what are the absolute bare necessities to get content out of ingest into the library? And that often is the way to get a [team] started into this idea of a MAM,” said Diversified Media Solutions Architect Dave Simon. “When we get started, often teams need something, but they don’t know what they need … [and what they need is a system] that will at least get content in and a fleet of interns to start logging.”