This week’s MLB All-Star Game in San Diego once again provided a showcase for the most cutting-edge production tools and tech toys the industry has to offer. Tech vendors turned out in droves at Petco Park to provide remote-production facilities, studio sets, specialty cameras, audio technology, virtual graphics, redundant power, and much more to Fox Sports, ESPN, MLB Network, and other broadcasters covering the festivities. Here is Part 2 of a brief look at some of some of the tech highlights at MLB All-Star 2016 that goes inside the trucks and vendors at the production compound. CLICK HERE for Part 1, which focuses on the cameras, graphics, and sets deployed in San Diego.

CES powered all three compounds at All-Star for Fox Sports, ESPN, and MLB Network — all of which were significantly spread out at Petco Park. CES deployed power systems embedded with electronics, software, sensors, and network connectivity that enabled all system components to collect and exchange data. 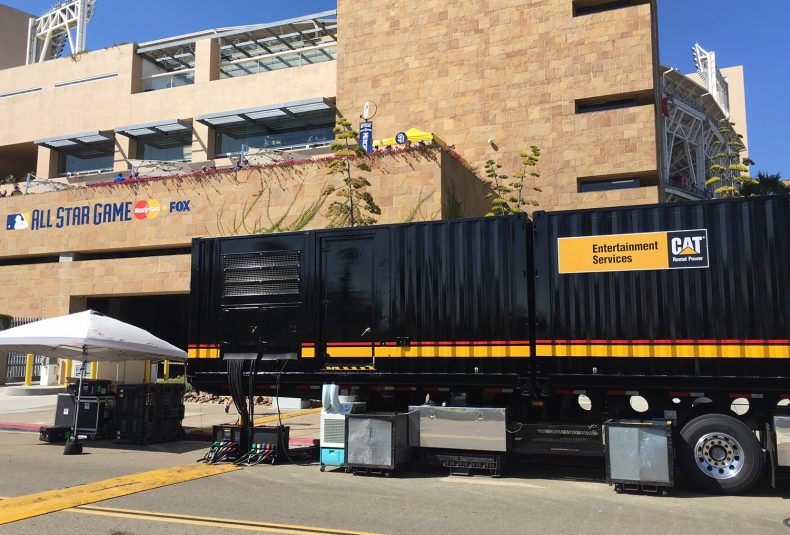 “These were custom-designed with Fox in mind and in consideration of the limitations of what we have available in some of the compounds in terms of both size and power amounts,” said Bobby DeLuna, account executive, CES. “We have basically split the technology and the environmental services so that we are feeding the tech side of the trucks through the UPSs, which will give them 13-15 minutes of backup time. They are powered by a generator backed up by the house: if there was a power loss, it would go to the batteries and then automatically through switches.”

At the All Star Game, CES introduced an uninterruptible power supply (UPS) module that provides battery backup in situations when multiple input-power sources drop offline. These systems feature redundant A/C to keep the electronics cool, as well as custom power-monitoring systems that immediately alert CES engineers via text message when a performance threshold is not being met.

On a hot afternoon in San Diego, the second HVAC unit automatically came online to be available as a backup, but the unit should have come online two degrees earlier. CES engineers were alerted via text and investigated through a remote laptop. They determined that a temperature sensor needed adjustment and, although they were capable of making the adjustment remotely, made a quick setting change onsite, bringing everything into alignment.

“We can now anticipate problems, analyze data, and respond in real time to make adjustments,” said Phil Wessels, managing director, CES. “Our reaction time is incredible, and we can evaluate anything that our system feels is concerning. We are anticipating and not reacting.”

When called on, CES engineers are capable of making similar changes throughout the system, either from a local smartphone or from a command and control center at CES headquarters in Florida.

Game Creek Video’s FX trucks (A and B units) celebrated their 10th anniversary at MLB All-Star this year and, for the first time, were responsible for working both the pregame–studio-show telecast and the game telecast. Previously, Game Creek had used a standalone mobile unit for the pregame show, but Fox opted to use a single truck and conduct a hard turnover for the 5 p.m. PT All-Star Game telecast this year. 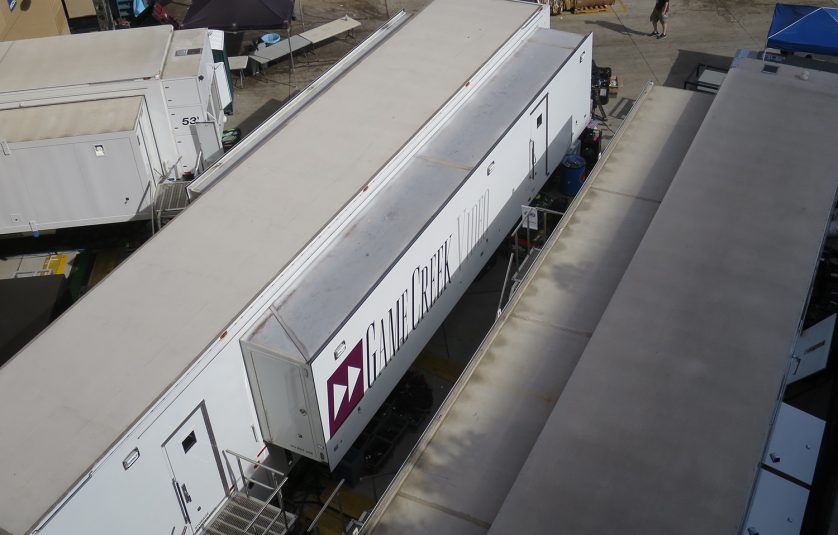 Fox’s compound comprises just three trucks — Game Creek’s FX A and B and Edit B — because the pregame show and the game telecast were produced out of the same truck.

“It really puts the onus on Fox production-wise to make sure they’re hitting their marks and getting it out on time, but, on the technical side, it was not really a huge challenge for us,” said Game Creek Video Project Manager Bryan Rule. “We’ll have a few minutes to flip the monitor wall from pregame to game, which is all prebuilt so that we can change it all with one keystroke. Assuming that goes well, we should be in pretty good shape.”

Although Fox’s footprint was smaller by a truck, Game Creek’s presence at All-Star remained massive, providing all facilities for MLB Network, whose compound was located roughly a half mile away. Game Creek’s Glory (A and B) truck served MLB Network’s studio shows, and Maverick served as game truck for the world-feed and the All-Star Futures Game productions. In addition, MLB Network deployed Justice as part of a standalone show outside the compound for its Red Carpet show on Tuesday.

“The interesting thing is that, while it is smaller as far as Fox is concerned, Game Creek still has to interface with multiple trucks and share about 40 signals with [the MLB Network trucks] half a mile away,” said Rule. “On a show like this, it’s nice to have so many Game Creek trucks together doing that, because the engineers know each other and know the trucks. It makes things a lot easier.” 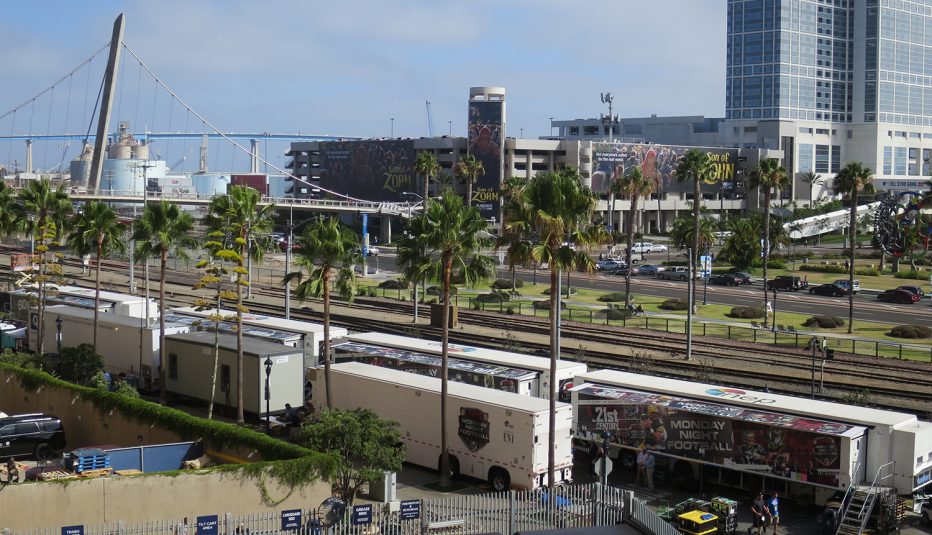 “It’s great that EN-1 has the infrastructure to handle all this,” said ESPN Operations Producer Carla Ackles. “With the exception of ESPN Deportes, all of these shows share resources, so it’s very beneficial to be able to have everything in one truck. The Derby, Baseball Tonight, and SportsCenter all take cameras and sources from each other, so it’s been nice to have this kind of setup.”

The Home Run Derby and Celebrity Softball Game was produced out of EN-1’s main production room in the A unit. The other half of the A unit, typically a graphics room, had been converted to a control room for Baseball Tonight’s set at Petco Park, complete with a switcher and Vizrt graphics system.

“We are using every inch of this truck,” said Ackles. “We have no other trucks here besides EN-1, which is great. It’s challenging, for sure, for the engineers, but we have a great team out here that know how to get it done. There is a benefit for everyone being together because of all the resource sharing.” 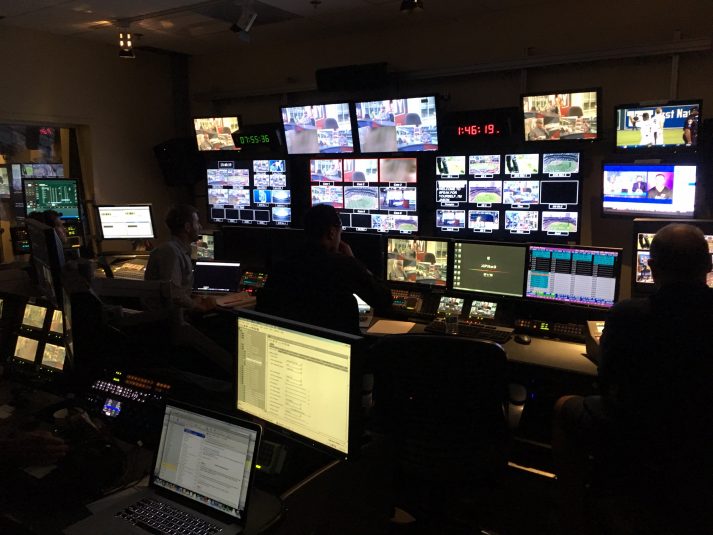 “We were very proud to be part of such a great event here in San Diego and to work with Fox Sports San Diego on all their pre- and post-game reports,” said SDTV Operations Manager Mark Parikka. “It was a three-camera remote along with several network camera feeds integrated, and it had all the bells and whistles in terms of EVS.”

The production marked the end of an era for HDLA, which is set to be fully gutted and upgraded with new equipment in the coming weeks, including EVS XT3 replay servers and a Grass Valley Kayenne switcher.