DiGiCo Goes on Tour With Bat for Lashes

Natasha Khan, aka Bat for Lashes, is an English singer, songwriter, and multi-instrumentalist. Her monitor engineer is Arron James Smith, who has been working with her on the promo tour for her new album The Bride, a three-date run of churches and cathedrals in the UK and her appearances on Europe’s summer festival circuit. His console of choice is a DiGiCo S21. 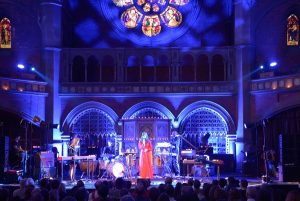 Smith has, he says, worked either end of the multicore and enjoys them both, but being at monitors allows him to work more closely with the band. “With Bat For Lashes I’m working with some great musicians,” he says. “The church gigs went amazingly and Glastonbury was great, too, particularly considering the weather. There was a fantastic audience there.

“Peppe Mallozzi at Autograph Sales UK kindly provided me with an S21 console to demo and also the hire for the short UK tour. The usability of the console is outstanding, not just for how I am using it on the shows, but in general. You can put an S21 in front of an engineer and know that you can show them round it in seconds if you ever need to and in the future training technicians and students on it will become a breeze. The S21 is so visual for setting up your patch and dynamics and, with the RTA (Real Time Analyser) in the dynamics, you can see exactly what the signal is doing. And the sound quality is second to none, too, which is really important with this band.”

“I couldn’t be happier,” he says. “So far the band have been nothing but complimentary about the tone and audio quality of the S21. The mic pre amps and the tube emulators really give an amazing result. I believe that all consoles can be made to sound great, but this DiGiCo makes it so easy, the usability is second to none. The footprint of the console is perfect for keeping the size of transportation to a minimum and it’s even small enough for me to fly with if necessary, rather than hiring abroad.

“Natasha has been really happy with the sound recently and, with Sennheiser ew 300 G3 wireless IEM systems and Ultimate Ears UE7, it’s made a great combination,” he continues.

Smith is also extremely happy with the service he’s received from DiGiCo, as well as from Autograph.

“I’m always happy with DiGiCo,” he smiles. “The guys and girls there provide some of the best customer service out there and Tim [Shaxson] has always been on hand to help me find any info I need. I’m hoping that in the not too distance future I’ll be buying an S21 for my own company, Brighton Rock Productions. It’s a great piece of equipment and great value for your money.”