Major elements of IBC and venue infrastructure are being retooled

The 2016 Summer Games are under way in Rio, and NBC Olympics will be breaking its own records in terms of amount of coverage, amount of live coverage, and much more. U.S. fans will be treated to 1,537 hours of coverage via broadcast and cable networks, and, as at the 2012 London Games, everything that OBS is making available to NBC will be streamed to viewers via the web and mobile apps (approximately 4,700 hours of content). Simply put, a fan who wanted to consume it all would need to watch the Olympics 24/7 for 286 days. 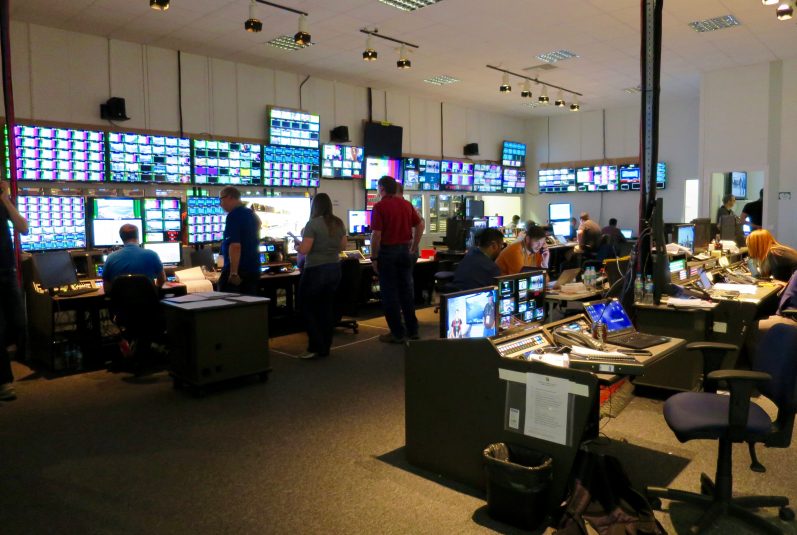 The NBC Olympics Broadcast Operations Center in Rio is benefiting from technical upgrades since the 2014 Sochi Games.

“OBS has also done significant new work that they hope will pay off in the long run,” says Mazza. “The entire IBC is now constructed out of a transportable panel system that [will be carried] to future Games. This has already helped NBC tremendously in the form of less risk to timelines and late completion and more-accurate fit-out, better acoustics, better cable trays, all with far fewer difficulties caused by the lack of consistent materials and methods of construction.”

Also helping is that the whole of the IBC was converted to a fiber-interconnect architecture. In addition, a new cross-fiber connect allows aggregation of various fiber feeds onto fiber mults.

“This sped up the install and testing tremendously, reduced the size of the very expensive cable trays, and will become the building blocks of an eventual 10-G or higher IP infrastructure [at the IBC],” says Mazza. 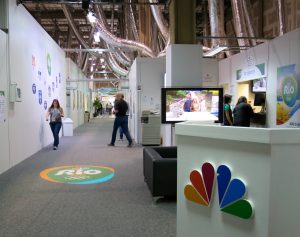 The NBC footprint in the IBC is similar to the one in London for the 2012 Games. It measures 73,000 sq. ft. and encompasses two large control rooms, one small control room, two studios (plus a small insert studio), and a 5,500-sq.-ft. news-production area. All the facilities are connected to NBC’s Stamford, CT, facility via four AT&T 10-Gbps fibers; the feed includes a backup of most signals.

“There is also a tiny, comparatively, tertiary backup of a 45-Mbps circuit on the satellite,” notes Mazza.

All told, more than 130 HD signal paths leave Rio and head to the U.S. with the help of MPEG, J2K, and IP encoding. Most of the signals go to Stamford, but others are being sent to 30 Rock, Golf Channel in Orlando, Telemundo in Florida, and NBC’s Dry Creek facility in Centennial, CO. The goal, says Mazza, is to have each on-air signal take the shortest path to air without having to daisy-chain through multiple NBC facilities.

“Stamford will be 50% larger than for the past two Summer Games, with more than 1,100 people working there,” says Mazza.

The center of the action at the IBC in Rio will be Control Room A and Studio One, where the network primetime show will be created every night. When the network primetime show ends, Control Room A will be tied to NBC’s Copacabana Studio for the late-night show (Control Room B and the Copacabana Studio will be linked for the daytime network production). Studio Two, meanwhile, will be connected to a production-control room at the Sports Production Operations Center (SPOC) in Stamford for production of NBC Sports Network coverage. 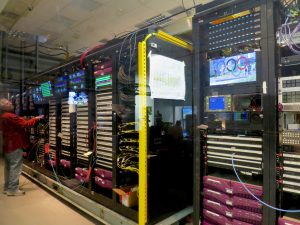 Highlights of the control rooms include an updated version of the Sony MVS-7000X production switcher with 3.5M/E and eight channels of internal MVS-7000 3D DVEs. Two eight-channel Abekas Mira servers provide 16 channels for effects transitions and on-set display feeds, are under direct control of the MVS switcher, and mirror the production-switcher operations in Stamford.

“These outputs are highly configurable,” Mazza explains. “Besides displaying the desired pictures, they allow the integration of tally, under-monitor display, audio indicators, and signal alarm functions.”

Also making a difference, an LSB/Lawo control system and panels (some hardware-based but many software-based via Windows tablets) control the same PESA SDI Matrix.

“In some areas, the soft panels have been incorporated into the workstation, like in an Avid edit system,” explains Mazza. “The LSB system is very flexible and should serve us well over the long haul.”

And, for maximum flexibility, the control rooms have the capability of working with the other studio if necessary. A monitoring router allows directly fed control-room monitors, studio talent monitors, and on-set monitors to be cross-connected to the other studio.

In addition, a multipurpose insert studio at the IBC is used by various operations and can be used by any NBC daypart as well as by NBC News and other associated entities. The studio can be used in various configurations: two-way interviews with other production studios (SPOC, 30 Rock, Copa Beach Studio), single-person standups, one-on-one interviews, and one-on-two interviews.

Increased Reliance on Asset Management
There will also be more file-based activity for this Olympics, especially as adoption and reliance on media-asset management (MAM) continues to grow.

“Rio will be a remote to the Stamford MAM system, and all venues with edit systems and EVS will have file-based connectivity,” says Mazza. “The venues will be asked to push melts to the IBC MAM in order to capture the melts with the EVS metadata.”

The number of MAM input channels in Rio has grown to 60, and a new user interface to the MAM systems, called MediaCentral, allows users to view and search both MAM and traditional interplay assets in the same interface. The MediaDecks are controlled by Cyradis Technology, which populates a ScheduALL work order that can then be managed by the Facilities Scheduling Group.

“This entry in ScheduALL is where all the pertinent info — like event name, duration and start time, record channel, transmit loop, etc. — is entered and tracked,” says Mazza.

“To accomplish this, there are seven control rooms in use and an RSN mobile unit parked at the loading dock,” says Mazza. In addition, an “Off Tube Factory” provides 18 announce booths for commentary, and NBC Olympics once again has a team of about 80 people in the Highlights Factory, building short clips and highlights. They make use of the tools available in the MAM system, Avid editing, and even EVS servers to create content.

“The goal is to create hundreds of clips a day,” says Mazza. “Most of these will be highlights but also will include B-roll, behind the-scenes footage, and other social-media–like material.

As in London, NBC Olympics will stream every competition live to the web and on mobile/tablet apps. Most web coverage will be from the Multilateral Distribution Service (MDS), a voiced version of competitions provided by OBS. In addition, all broadcast and cable outlets will be simulcast on the web and apps.

“Most of this activity will be at iStream Planet in Las Vegas, with an alternate site at Microsoft in Ashburn, VA,” says Mazza. “Almost all of the streaming feeds will go to Stamford (or originate there in the case of the dayparts), and then they are fed on Level 3 circuits to Las Vegas and Virginia.”

The 2016 Rio Olympics are just taking flight, and the Opening Ceremony tonight will officially turn the world’s attention to this corner of the world. NBC Olympics is doing its best to make sure U.S. viewers don’t miss a second of the action.