The Ivy League has rolled out numerous improvements to The Ivy League Digital Network (ILDN) for the 2016-17 academic year, highlighted by availability on Apple TV and Roku. 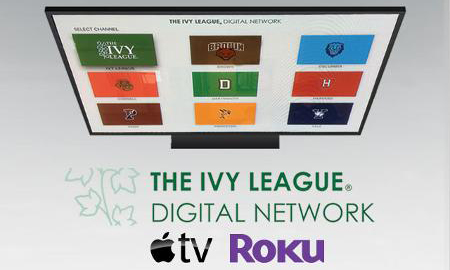 ILDN is a nine-channel network, home to live event coverage of over thirty sports as well as on-demand content from each institution.

“The first three years of the Ivy League Digital Network have been incredibly successful in showcasing the strengths of the League’s model of intercollegiate athletics,” Ivy League Executive Director Robin Harris said. “We know it is important to give our fans as many viewing options as possible. To that end, we are excited to announce these enhancements to ILDN and to partner with NeuLion to launch the ILDN app on Apple TV and Roku.”

Aiming to serve its fans on as many platforms as possible, the Ivy League announced the launch of the ILDN app, which is now available on Apple TV and Roku for in-home television viewing. The new app will feature all live events and on-demand content on the ILDN.

“We are excited to expand our partnership with the Ivy League by offering fans the ability to watch great live and on-demand video content on Roku and Apple TV devices.” said Tim Vargas, Senior Vice President of NeuLion. “Fans’ natural tendencies are to watch video, especially live video, on the largest device available. By providing over-the-top apps, Ivy League fans will now be able to enjoy a big screen television experience.”

Fans are encouraged to purchase their subscription to the ILDN on their desktop, mobile device or tablet before enjoying the events and content on Apple TV (fourth generation only) or Roku. Third generation Apple TV will still be able to access ILDN through AirPlay.
Enhanced Platform Elements and New Graphics Package
In addition to the introduction of the ILDN app, ILDN subscribers will notice a revamped video graphics package this season. The custom-designed package aims to enhance the viewer experience during live event production and provide consistency across the Network.

The graphics package comes along with numerous platform changes that are being made to ensure that live and on-demand content can be found more efficiently. These changes will be notable on game-specific content featured on the ILDN and will include game previews and highlights.

ILDN on ESPN3
The Ivy League continues its partnership with ESPN, the Worldwide Leader in Sports, to simulcast select ILDN broadcasts on ESPN3 and the ESPN app. This marks the third consecutive year for this relationship, which provides more broad-based coverage of Ivy League contests and events. The fall schedule of events that will be simulcast on ILDN and ESPN3 will be announced in the coming weeks.