This September has been a full one for the Filmwerks team, and last week was one of the biggest and busiest. After powering ESPN’s US Open production at the USTA Billie Jean King National Tennis Center, the crew launched two UPS (uninterruptable power supply) touring systems, one for WWE Network and the other for CBS/NFL Network’s Thursday Night Football package. Both systems were custom-built for the clients’ specific tour power needs and offer each a redundant power supply.

Last week, WWE Network hit the road in Memphis, TN, with a trailer custom-designed by Filmwerks’ engineering team. The trailer, which had been in production for four months, features two 350-kW generators and a 400-amp UPS system to support both an A and a B unit for WWE.

Filmwerks faced a number of challenges in designing the WWE trailer. First, the system had to be durable enough to travel 52 weeks a year yet efficient enough to handle one-day shoots.

“[We had] to ensure that we can use this system in the most efficient manner, since most of the WWE shows are set, strike, and shoot in one day,” says Filmwerks GM Chad Corbin. “We designed our trailer with quick connections on the exterior of the trailer for utility and load connections. The UPS unit, transfer switch, and generator are already pre-cabled internally; this allows our technicians to pull up to a TV compound and plug and go.”

Filmwerks also sought to make the trailers as light as possible. Because not all WWE venues have adequate power, the company had to provide a redundant generator system in addition to the UPS system. Its engineers took extra steps in designing the unit and developed custom lighter-weight batteries for the UPS unit, saving nearly 1,000 lb. Filmwerks also took strides to ensure the quietness of the units, as well as the environmental impact.

“The UPS system really did provide a measure of redundancy, and it’s becoming more and more acceptable in this industry,” says Filmwerks owner Mike Satrazemis. “All of these guys really want to be more conscientious of what they’re doing with respect to the environment. We’re seeing an uptick of the industry wanting to be responsible, and this is a huge step in that direction, along with an increase in reliability in the systems that we provide.” 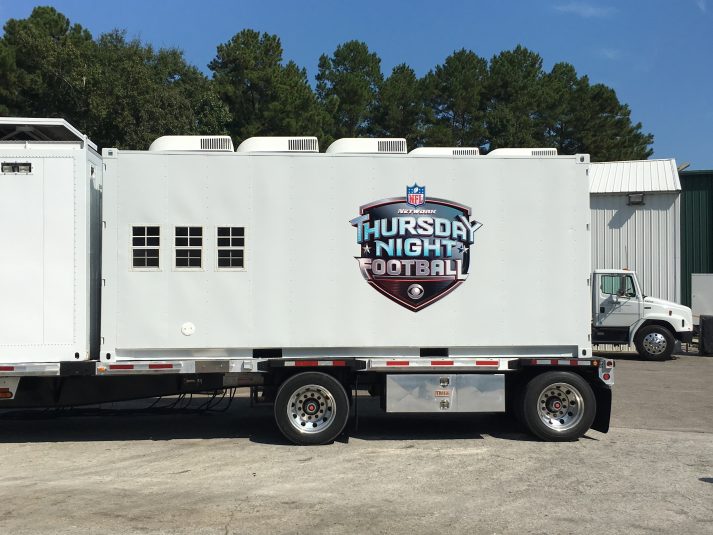 The new Filmwerks power supply for the TNF tour features an 800-amp UPS, nine tons of air-conditioning, and a small office space.

Filmwerks also helped kick off Thursday Night Football for CBS/NFL Network last week, providing a UPS system for the weekly production. The company had tested the concept during the regular season last year in preparation for Super Bowl 50 in Santa Clara, CA.

“CBS and the NFL saw the success of using this system at the Super Bowl, so they asked us to incorporate a UPS system into the 2016 TNF tour,” says Corbin. “We are really excited about this system we put together for this tour and the possibility of doing more packages like this with our other clients.”

For the new season, Filmwerks designed, engineered, and fabricated a custom box for the TNF tour with an 800-amp UPS, nine tons of air-conditioning, and a small office space.

“Our industry is constantly looking for opportunities to use UPS technology not only for the extra reliability it provides them but to reduce their overall carbon footprint,” Corbin points out. “Our UPS system is a perfect fit for the NFL tour since there is always sufficient power at each of the NFL stadiums.”

Prior to the start of the WWE and NFL seasons, Filmwerks wrapped up its support of ESPN’s US Open production. For the second year, the company deployed its UPS systems to back up the utility power for ESPN’s broadcast and added systems to support Tennis Channel and USTA operations.