Live From the Ryder Cup: GoVision Delivers for Fans Hungry for On-Course Coverage

More and more golf fans attending events expect large video displays to keep them up-to-date with live video coverage and scoring updates, and they will find them at the 41st Ryder Cup this weekend. GoVision is onsite providing 15 large LED screens: 12 on the course and three in the Media Center.

“This is the most screens we’ve ever placed at a golf tournament,” says GoVision founder/CEO Chris Curtis. “We put a record number at Medinah for the 2012 Ryder Cup, but this takes the cake. And this time, we’re constructing each of the on-course screens with our state-of-the-art inventory of modular GV 6-mm SMD panels, so the viewing experience onsite will be absolutely spectacular.” 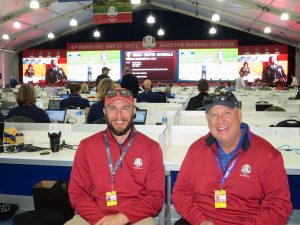 Brett Amman, director, golf, GoVision, notes that, after 2012, the desire was to incorporate the production and creative services into the company, a move that has resulted in more than 20 staffers on hand for the Ryder Cup.

“We have our all-star team here and have been able to pick and choose the best of the best,” says Amman. “For example, we have three cameras around the first tee, the practice green, and the driving range that were used a lot from Monday to Thursday. Now we are taking the live feed from NBC.”

“The great thing with LED,” says Ammon, “is, you can always build larger as long as the scaffolding support is there, the power is there, and the processing power is there.”

There are also three screens in the Media Center in a configuration that matches the Media Center screens at the PGA Championship in Baltusrol, NJ, this year. It includes a center screen that is 11 ft. high and 60 ft. wide complemented by a screen on each side that measures 9 by 16 ft. The middle board has a pitch of only 5 mm (thanks to 266 of the GV 5-mm SMD indoor panels); the two smaller boards, 6 mm. Click Effects is being used for graphics creation for the scoreboard and scores.

“It’s been operational since Sept. 21, and the members of the media give us the feedback on what they want to see,” says Amman. “The PGA is also much more involved in the look of the graphics on the scoreboard as there is a lot more real estate to play with since there are not 156 players.”

GoVision’s Creative Services team will also provide all the content and scoring throughout the tournament, as well as Media Center support. This requires an onsite team that comprises a producer, technical directors, motion-graphics designers, graphics operators, a technical-operations manager, an audio engineer, and a multitude of production systems to support their work.

“This is a total team effort involving multiple divisions at GoVision, which, frankly, wouldn’t have been possible the last time we worked the Ryder Cup,” says Curtis. “It’s a testament to our strategy of bringing complementary capabilities in-house, which has enabled us to be a one-stop shop for the PGA and other large clients. I couldn’t be more proud of our expanded team for its unprecedented role at this major global event.”