NHL hockey returns to the great outdoors once again this New Year with one major twist: fans will get twice the action on the outdoor ice. NBC Sports will produce two outdoor games in two days: The NHL Centennial Classic featuring the Red Wings and Maple Leafs on Jan. 1 at BMO Field in Toronto and the NHL Winter Classic featuring the Blackhawks and Blues at Busch Stadium in St. Louis on Jan. 2. 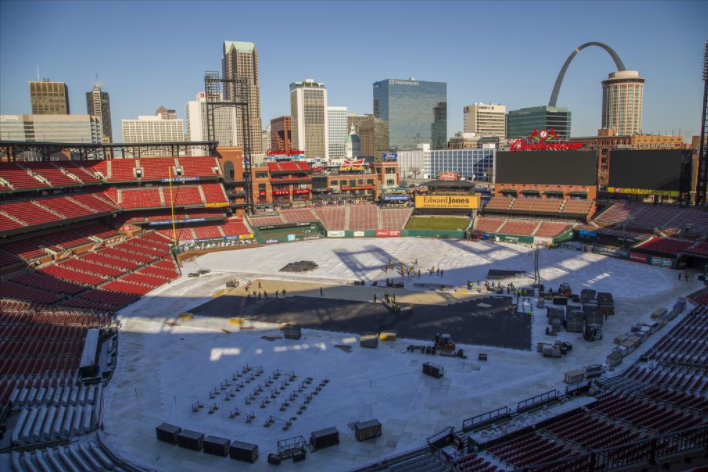 Busch Stadium will serve as the home of the ninth NHL Winter Classic on Jan. 2

“We’ve big fans of [the Winter Classic] from year one and we’re very excited to also be presenting the Centennial Classic this year,” says NBC Sports Executive Producer Sam Flood. “Each game is an event in its own right, but the Winter Classic is very special. We knew right from the first one in Buffalo that it was something unique and had the ability to change the way people watch the game of hockey. We’ve turned it from a game into an event and, each year, embraced different locales. I think that’s added up to a very important part of the hockey calendar in terms of exposing new people to the sport of hockey.”

NBC Sports has been here before, of course. In 2014, the NHL Stadium Series required the Peacock production team to deliver back-to-back outdoor game telecasts at Dodger Stadium and Yankee Stadium on Jan. 25 and 26, and once again at Soldier Field on March 1 followed by the Heritage Classic at BC Place on March 2. However, this year, NBC has the added challenge of being the sole rights-holding broadcaster at the Winter Classic.

“The biggest challenge this year is that NBC is the only rights-holding broadcaster producing the Winter Classic,” says Ken Goss, SVP of Remote Operations & Production Planning, NBC Sports Group. “In years past we’ve been able to find efficiencies with the other rights-holders on-site, but this year we are responsible for everything, which requires more equipment and personnel. We then will re-deploy all of our equipment back into rotation to cover the rest of our regular-season games, and have games on Jan. 3 and 4.”

Celebrating a Century of Hockey in Toronto

First up, NBC Sports will team up with primary broadcaster Rogers Sportsnet to produce the Centennial Classic on New Year’s Day at Toronto’s BMO Field – a soccer-specific stadium that is home to the MLS’s Toronto FC (as well as the CFL’s Toronto Argonauts).

“This is our first outdoor NHL game in a true soccer stadium,” says Goss. “One challenge is that we don’t have a true end zone position due to configuration of stadium, but we are able to work around it with a slash position.”

NBC, which will have a crew of 60 on hand, will utilize NEP ND6 as its primary mobile unit. NBC will deploy a total of nine unilateral cameras as well as take feeds from Sportsnet and TVA. Among the cameras will be a Sony HDC-4300 high-speed cameras, an RF Sony HDC-2500 handheld, and a Sony P1 robo. Sportsnet will provide variety of specialty cameras, including a RefCam, CableCam system, aerial helicopter shot and two robos, while TVA will provide netcams.

NBC’s pregame coverage of the Centennial Classic, which kicks off the league’s year-long Centennial celebration, will be anchored by Kathryn Tappen and analyst Jeremy Roenick. Since the pregame coverage will primarily feature the Centennial celebration, NBC will not deploy a full on-site set at BMO field. Once the puck drops, John Forslund (play-by-play), Brian Boucher (analyst), and Pierre McGuire (Inside the Glass) will call the action.

“This gives us an opportunity to celebrate 100 years of the NHL – the greatest hockey on Earth,” says Flood. “So we’re going celebrate some of the stars that made the game great in its early years. And Toronto is the home of hockey with the Hockey Hall of Fame and two of the league’s primary offices there. Plus [the Leafs] have got a team that’s improving dramatically with some great young talent, so it adds the dimension that Toronto is relevant again as hockey city, not just as a home of hockey. I think celebrating in the backyard of this city at an outdoor soccer stadium, which will be very intimate for hockey, adds up to a perfect day of pucks – as long as the weather cooperates.”

Meet Me in St Louis: Dropping the Puck on the Ninth Winter Classic

The next day, NBC will kick it into high gear as the sole rights-holding broadcaster for the Winter Classic at Busch Stadium – home to the St. Louis Cardinals.

“To me the most important camera for the outdoor games is the overhead live shot, which gives you even a bigger perspective than the Skycam,” says Flood. “We’ve gotten better with the sky cam. I think it shows the speed and the pace and it can follow the play off ice and it’s a lot of fun to watch it. So, I think we really know how to use that now. But there’s still nothing better than a shot from the airplane. A goal is scored and you see the entire stadium in the moment from that perspective.”

As has become standard on larger NBC Sports shows, the remote production will be tethered heavily to NBC Sports’ broadcast center in Stamford, CT, moving upwards of 1 Tb of file-based content for the Winter Classic.

For the second consecutive year, NBC Sports Group will produce the Winter Classic in 5.1 surround sound.

“It’s a very different sound from inside a building because the audio goes out instead of stays within,” says Flood. “But the on-ice sounds are further away from the crowd so the on-ice sounds are crystal. You’re able to hear more of the players and the skates because there’s a bigger separation to the spectators. And that takes the crowd noise to a different level. The crowd noise is handled by a different set of mics and the ice mics don’t pick up the crowd in the same way they do in an indoor building. I think that changes the sound and the tone of the game.”

Creating ‘an Event’ Beyond the Game
Flood’s philosophy that the Winter Classic is not just “a game”, but rather “an event” holds true this year, as NBC will deliver a host of on-site shoulder programming surrounding the game itself. The primary studio set at Busch Stadium has been built into the stands and is located down the third-base line at the top of Section 154.

“We have extensive experience producing outdoor NHL games from baseball stadiums,” says Goss. “Our only challenge was the inability to use any of the existing broadcast booths for our studio.  We were able to adjust by finding a location in the stands that will give us the shot with the scenic background that we wanted.”

NHL Live host Liam McHugh and analysts Mike Milbury, Keith Jones and Roenick will man the set for pre-game, post-game, and intermissions. Once the puck drops, the estimable Mike ‘Doc’ Emrick (play-by-play), Eddie Olczyk (analyst), and McGuire (Inside the Glass), and Roenick (roving reporter during the game) take over to call the Blackhawks-Blues showdown. In addition, Bob Costas, who began his professional broadcasting career in St. Louis, will join NBC Sports’ coverage of the 2017 NHL Winter Classic.

“Obviously having Bob Costas in his hometown of St. Louis is going to be very special. Bob will be doing some St. Louis elements in the pregame explaining what this team now means to the city and the Blues’ 50 years of history,” says Flood. “With the Rams defecting to Los Angeles, it means that this is truly a hockey town until baseball season begins. The Blues are the only sport in town, which makes it that much more impactful on the city. So, tying that all together and playing it in the baseball park of one of the, if not the best run organization in baseball, is pretty special.”