The NFL Network is once again delivering a ton of content to viewers, but, for Super Bowl LI, it is taking a slightly different approach by relying more than ever on the control-room operations at its home base in Culver City, CA. The network is also making use of three Game Creek Video production trucks for special events around Houston. 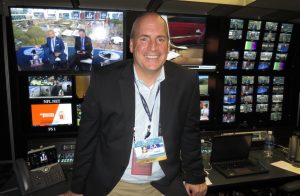 Dave Shaw of NFL Network says the use of a flypack from VER made sense this year.

“For every city, we take a little different approach. We have a flypack that was built with VER in the convention center, but there is no video switcher and no editing, as all the cameras are fed back to Culver City,” explains Dave Shaw, VP, production, NFL Media. “We do have three Calrec audio boards, and we send back over 400 channels of audio and IFB along with video.”

The flypack was able to be used because many of the pregame activities take place in a small area in downtown Houston. The convention center is home to the NFL Experience and Radio Row, and right across the street is Discovery Green, a downtown park where the TV networks have set up primary studio locations.

“If we used a truck here, it would have to have been on the loading dock, and that would have required long fiber runs,” says Shaw. “The flypack was easier and quicker.” 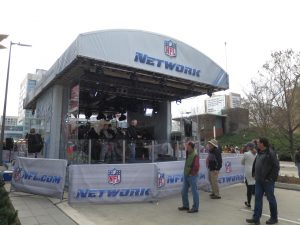 The NFL Network has a dual set outside the convention center.

“It’s the one building that overlooks everything and has a balcony that we can shoot on,” says Shaw.

Fourteen cameras are in use at the various locations, including six RF systems provided by BSI and AVS. 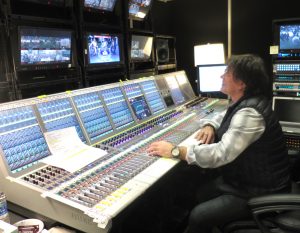 Transmission to Culver City is done via four fiber circuits (two out/two in) provided by Level 3 and The Switch. Those circuits have 10 muxes on each. The staff in Culver City cuts the show, rolls in clips and other elements, and adds in graphics.

“The upside of a truck is, it is already connected, it works, and you know everything you need is going to be there,” Shaw explains. “[A flypack] requires more design, and you rent only what you need. But you do save a little bit of money, depending on where you are and what you are doing.”

The production team did make use of Game Creek Video trucks for those events that required a production team to be closer to the event. Pride was used at Opening Night at Minute Maid Park on Jan. 30 and will also be used at NRG Stadium for Super Bowl pre/postgame coverage. Nitro will be used tonight for the NFL Honors Show. And Gemini was deployed for the NFL Commissioner Fan Forum, a Friday-morning event at the House of Blues that came together in the past two weeks.

“Using a flypack or truck depends on where we are and what we are doing,” notes Shaw. “For example, if we are just going in and out, like Opening Night at Minute Maid, then it makes sense to have a truck for that.” 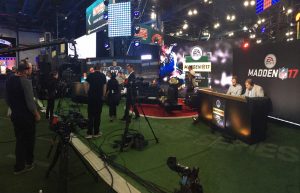 The ESL was broadcast live on NFL Network on Jan. 3.

One unique offering on NFL Network took place on Friday night when it broadcast an ESL Madden NFL 17 competition held in the Fan Experience. The ESL production team cut the show from a control room located right behind the EA Sports booth. The signal was sent via fiber to Culver City, where commentary was inserted and the signal sent to Atlanta for distribution via the network and back to the convention center so that ESL could distribute it online.

“The digital teams have morphed over the past couple of years and merged so that a lot of the features and dotcom programming is done by the same production teams,” says Shaw. “But social has grown a lot, so there is a 10-person Snapchat team that is doing nothing but live Snapchat shots.”