SVG’s annual Sports Venue Production Summit highlights the latest in sports-venue production and technology, and perhaps no stadium better exemplifies the current state of the art than the NFL’s newest, U.S. Bank Stadium. More than 160 attendees turned out for the two-day event this week for a behind-the-scenes tour of the Minnesota Vikings’ new home, an opening-night reception overlooking the field, and a full slate of panel discussions focused on delivery of the best possible game-day experience to fans. 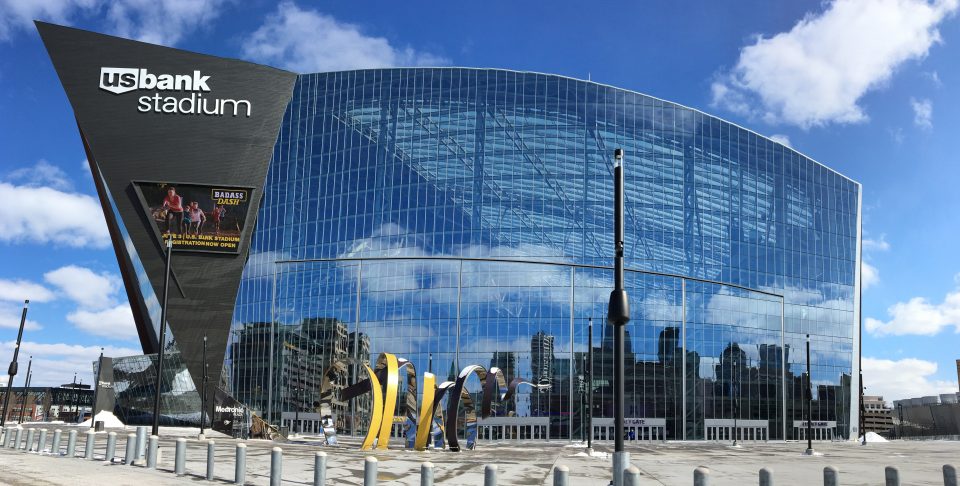 “It’s a great building. We’re really proud of it, and it has exceeded expectations,” said Lester Bagley, EVP, public affairs and stadium development, Minnesota Vikings, in his opening remarks to attendees on Day 2. “It has become a community asset after a long hard battle in Minnesota with the public and with the legislature in getting this to the finish line. 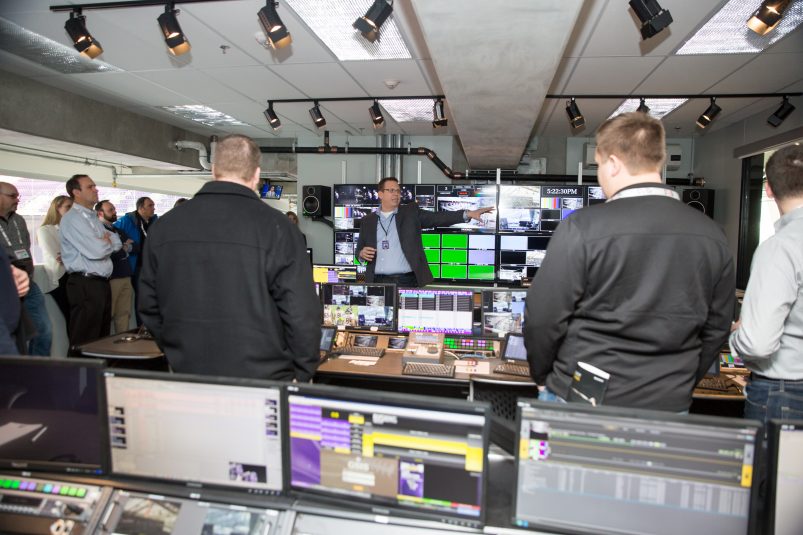 “From the beginning,” he continued, “our vision at the Vikings was to deliver a great fan experience and everything we did, all that investment we made went into fan amenities, into the fan experience, and we humbly believe we actually exceeded expectations. On game day, this building is incredible. … It really provides for great fan energy and provides an incredible home-field advantage.”

The event kicked off on Monday March 13, with a top-to-bottom tour of U.S. Bank Stadium, where attendees were invited inside the Vikings locker room and interview room and onto the field. The tour also hit the truck dock (located inside the building to protect mobile units from harsh Minnesota winters) and the video-control room, located on the press level. 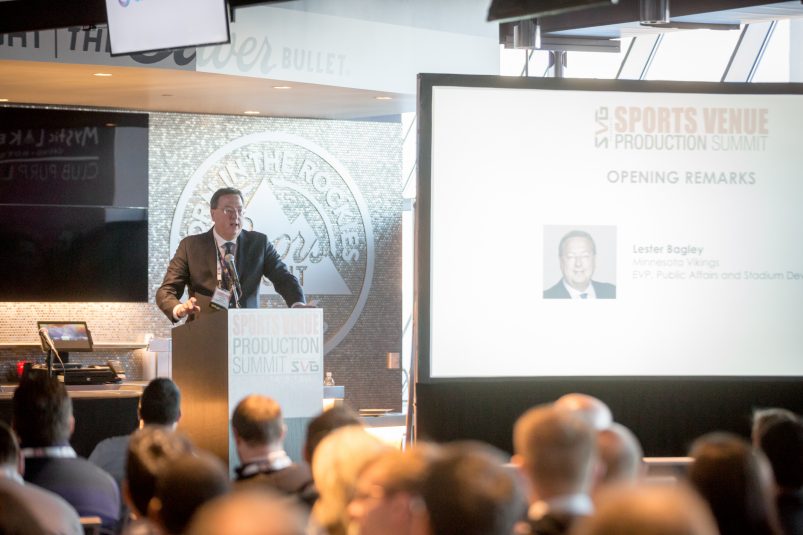 Alpha Video worked with the Vikings, the Minnesota Sports Facilities Authority (which owns and operates the stadium), and SMG (which manages the stadium) to build out a robust equipment package within the group’s budget. In total, the group dedicated more than $60 million of its total budget to technology. The finished project is a hybrid of IP and baseband technologies that support 4K content capture and 1080p output to the video displays. 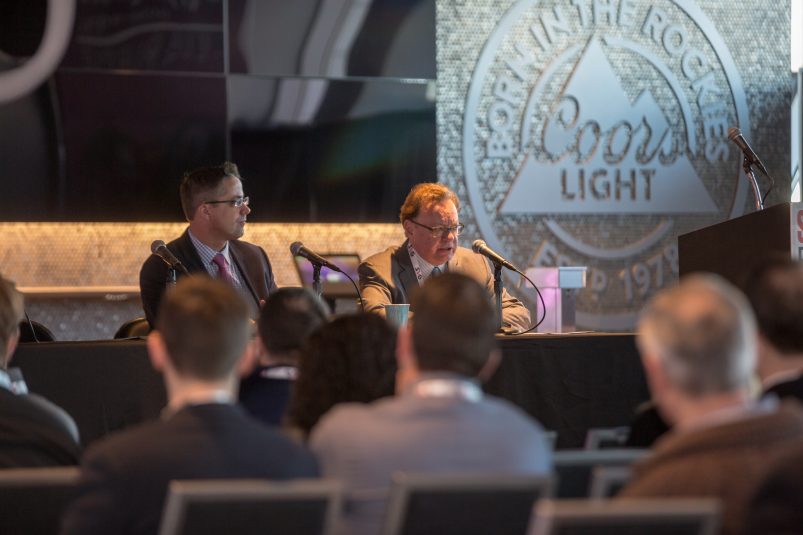 In making technology decisions, the team’s priorities were that the gear be reliable, flexible, and extensible. On Day 2 of the Sports Venue Production Summit, Minnesota Sports Facilities Authority Chief Technology Advisor James Farstad and Minnesota Vikings VP, Corporate Technology and Partnerships, John Penhollow took to the stage to explain the inner workings of the budgetary process and the continuing capital campaign to keep U.S. Bank Stadium at the forefront of technology.

“We have a 30-plus–year capital plan for the reinvestment of technology,” explained Farstad. “It launches with our 2017 capital plan, and I think that’s essential: not only to design and build to the utmost but also to recognize very early … some of those areas where we might have over–value-engineered. We want to correct that and make sure that we’re maintaining it for the future and creating an environment that supports not only the care and feeding of the technology but the ongoing operational aspect of technology as well.” 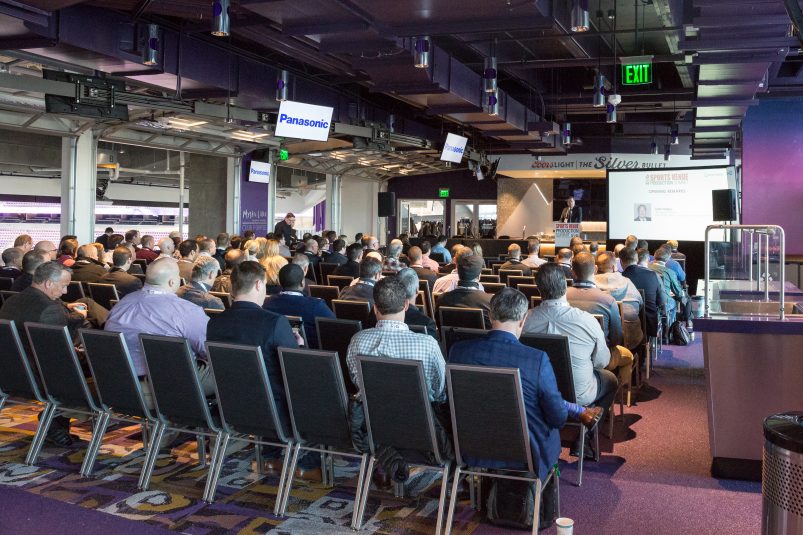 Throughout Days 1 and 2, a key focus of the Sports Venue Production Summit was U.S. Bank Stadium’s preparations for Super Bowl LII in 2018. The stadium was constructed with 550 miles of fiber and 6,200 miles of copper, which will certainly come in handy for the big game. In the meantime, the focus remains squarely on delivering the best possible experience for Vikings fans.

“For us at the Minnesota Vikings, what was key to all of this was, we wanted to enhance the experience in some way,” said Penhollow. “We didn’t want to get in the way of all of you enjoying a game because, ultimately, what really matters most is what’s happening on that field. Which is interesting because it’s the one area that none of us can actually control. What we could control was what happened once you walked in to the building, so it was a challenging task but one that we were happy to take on.”

Check this site for more reports, including photos and video, from SVG’s Sports Venue Production Summit next week.