More live-sports-content creators are using at-home and remote-integration (REMI) production workflows than ever before in an effort to deliver games cost-efficiently without sacrificing quality. With that in mind, Vista Worldlink is aiming to become the go-to production- and transmission-services provider for the at-home production market with an expansive overhaul of its Ft. Lauderdale, FL, production/transmission facility, essentially creating an at-home broadcast center for leagues and broadcasters. 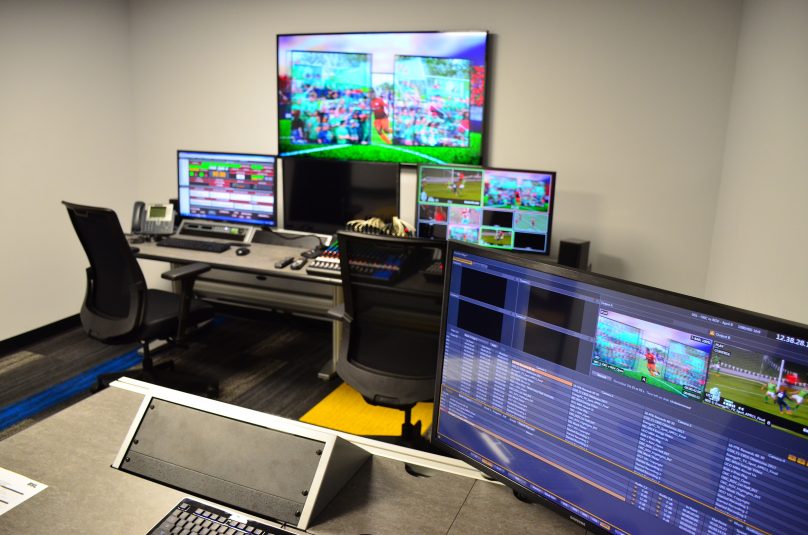 Vista’s production facility takes a clean feed and integrates graphics and other elements for distribution.

The newly revamped facility is contracted to produce and deliver more than 400 at-home–produced events this year for the United States Soccer League (USL), National Women’s Soccer League (NWSL), and others.

“Our goal is to become the go-to at-home independent broadcast facility of the future,” says VISTA Worldlink VP Josh Liemer. “I believe that’s exactly where we’re headed. We are well-positioned for this cultural change in the industry because of our extensive experience with transmission services. We know how to get signals from point A to point B cost-effectively, and [at-home production] doesn’t happen without efficient transmission technology. So that is what got us thinking about how we can make a big splash into this new wave of the industry.”

As it enters its 30th year of business as a transmission- and production-services provider, Vista has invested heavily in what it believes to be the future of live production: the at-home model.

“When I think of where we started and where we are today, at-home production is just another evolution of what we’ve been calling integration for many years, where we added graphics to clean feeds for international distribution,” says Liemer. “We are now evolving into host broadcasters with more-advanced control rooms.”

In addition, Vista renovated its communication-services center, representing their core legacy transmission business and handles everything from international distribution of the Academy Awards to satellite-uplink trucks for Univision and Bloomberg.

With Anchor Clients USL and NWSL Already in Tow

Although Vista greenlighted the facility revamp anticipating that demand for at-home–production services will skyrocket in coming years, the company already has a few anchor customers signed on. Using its new facility, Vis     ta will produce approximately 250 USL games this year and 100 NWSL events while also providing archiving and live-streaming services for both.

Over the past year, Vista has worked with Tata Communications to build out the USL transmission network, which connects all 30 USL stadiums to the Ft. Lauderdale facility. In addition Vista and Tata architected a series of proprietary portable broadcast units (PBC) that have been deployed at all USL venues.

“We are utilizing IP for the first mile from each stadium. Then, we will run on the Tata backbone into our VISTA facility, so that we have various security and management controls,” says Liemer. “We are at just under two seconds of latency, so we’re within that range [provided by] traditional satellite or fiber but at a much lower cost.”

The USL productions deploy a minimum of four cameras (with some teams adding a pair of net cams), all backhauled to Ft. Lauderdale, where all graphics, replays, and other elements are integrated.

The crew onsite for USL productions comprises only camera operators, a technical manager, and an EIC. Some teams’ announcers will be onsite at the stadium; other teams will call the games from audio booths in Ft. Lauderdale. The final product streams out to USL’s YouTube channel and to local affiliates if a team has a deal in their market.

“We can now also consistently backhaul a clean feed and a dirty feed from each venue, so, for any away team that wants their out-of-market match broadcast, we can integrate an out-of-market broadcast on top of the host’s production clean feed. That will also add a layer of production.”

Vista has also built out the transmission network and supplied PBUs to all 10 NWSL venues. In addition to live-streaming 100 games to Verizon’s go90 as at-home productions from Ft. Lauderdale, Vista is producing the NWSL Game of the Week on Lifetime in the traditional fashion with a mobile unit and full crew onsite.

“I think we’re well-positioned for this growth, and we have some great core REMI clients that we’re working with,” says Liemer. “We’re going to grow with them and learn a lot in the next few years. From there, I think we will be very well-positioned for some of the larger broadcasters, like ESPN and others, to take a look at Vista’s capabilities to support a variety of their REMI events as well.”

More Than Just At-Home Production
Beyond the at-home–production business, Vista is once again providing world-feed integration for approximately 300 MLS matches this season. One of Vista’s integration pods receives each game’s clean host-broadcast feed and integrates a specific MLS international graphics package before distributing to IMG, which handles MLS’s international rights. In addition, Vista is in its 17th season as the official digital archive provider for MLS.

In January, Motorsports TV moved its entire operation from Paris to Vista, which now provides network origination for five channels, as well as live event integration, welcoming the Motorsports family into its Fort Lauderdale facility. Vista is using IP technology to send and receive commentary from announcers around the world.

Other major clients include Western Athletic Conference (WAC), which is using Vista for integration and live streaming of 60 events this year, and the LPGA’s developmental Symetra Tour, which has relied on Vista to stream the back-nine holes of multiple tournaments to Facebook Live.

“It’s really an exciting time to be in this industry because it is evolving so much,” adds Liemer. “We’re excited about this investment and this new element of our facility because we believe it can provide tools that the industry will demand even more as it changes in the future.”