The Baltimore Ravens gave fans plenty to be pumped about heading into the 2017 NFL season. Over the summer, the team embarked on the first phase of a three-phase stadium-revitalization project at M&T Bank Stadium, installing two 4K UHD video displays and a wealth of 4K-capable gear to capture, produce, and distribute high-resolution content. But that wasn’t all. Just prior to the team’s second preseason home game, the Ravens announced that they had become the first NFL team to install SkyCam. 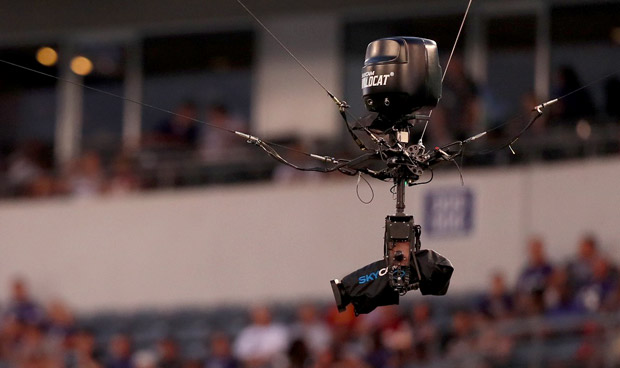 The Ravens will share their SkyCam feed with broadcasters that don’t have one.

Football fans are no stranger to SkyCam. The technology has long been used on television broadcasts, giving fans at home a bird’s-eye view of the action. The same view has also appeared on in-venue videoboards, though only when a broadcaster is present to provide the technology and share the feed. By installing their own SkyCam, the Ravens will have access to the high-angle shot at every home game.

“We’re not the only team that’s trying to enhance the fan experience with different types of cameras — goal-post cameras, SkyCam, pylon cam — and so the NFL this offseason put together some guidelines on cameras that teams can control,” explains Jay O’Brien, VP, broadcasting and gameday production, Baltimore Ravens. “Once SkyCam and the NFL came together and put together their guidelines, it worked out perfectly for us to get it done this offseason to coincide with our stadium upgrades. The timing just worked out great.”

Being the first NFL team to add SkyCam continues the team’s trend of being at the forefront of new technology. Two years ago, the Ravens became only the second team to add freeD technology (the Dallas Cowboys were the first) — but were the first to make the technology 360-degree–capable. “We’d rather be a year early than a year late,” says O’Brien, discussing the team’s philosophy in adding new technology. “We’re always trying to bring our fans interesting content and give them another reason to come to the stadium and spend their game days with us.”

Just as broadcasters have long shared the SkyCam feed with their in-venue counterparts, O’Brien says that the Ravens plan to share the feed with broadcasters that might not have SkyCam as part of their complement. This is particularly important, he explains, because the SkyCam may have the best angle of a controversial play and only broadcast cameras can be used for replay purposes. But it also further fosters the relationship between the team and the broadcasters.

Broadcasters that do deploy SkyCam — for example, NBC Sports’ Sunday Night Football or ESPN’s Monday Night Football — will direct the Ravens’ SkyCam for both the in-venue and the broadcast show. Otherwise, the Ravens will have control. In both instances, the SkyCam pilot will sit in the coaching-video booth at the top of the stadium and maneuver the aerial-camera system.

O’Brien is particularly excited about using the camera angle on the new 4K UHD videoboards, which are very wide-screen and thus work well with the wide-angle capture capabilities of the SkyCam. The camera also enables the Ravens to tap into one of the most successful camera angles in the television-broadcast arsenal.

“The reason we arranged SkyCam is, it’s the premier camera angle in the NFL,” says O’Brien. “It’s great live, it’s great for replays. We’ve used it during commercial breaks to take fun sweeping shots of our fans, and we’ve noticed that fans have really engaged with the camera: when the camera flies over their section, we’ve seen the entire section stand up and start waving. It has enhanced not only the game coverage but also our commercial-break coverage as well.”