ESPN brings its College GameDay roadshow to the center of the universe for the first time in its 25-year history this weekend, with the traveling studio show making its New York City debut in Times Square. Although the big city presents GameDay with a unique opportunity to visit what VP of Production Lee Fitting calls the “melting pot of college-football fans,” Times Square also presents the ESPN ops teams with a host of unique challenges.

“Times Square never stops,” says Bob Braunlich, VP, remote production operations, ESPN. “One of the things that makes this so challenging is that we are in an extremely busy place that is truly 24/7. New York City is always tough. I was part of five New York City marathon [productions] when I was with ABC Sports, and those had their share of challenges, but most of the places we were setting up didn’t have the constant pedestrian traffic that Times Square does. I think I can safely say there aren’t many [shows] like this one.” 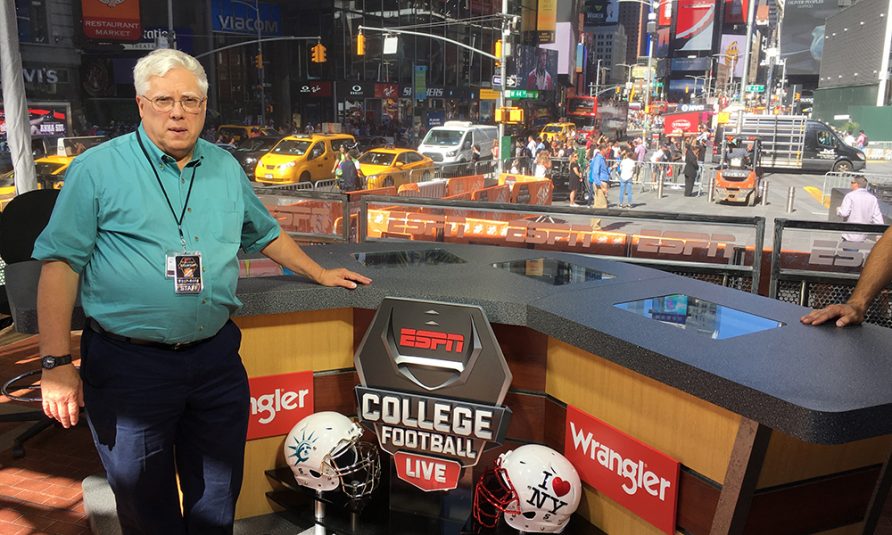 Half a Decade in the Making

Hosting College GameDay in Times Square has been an ESPN concept for roughly five years, and the operations team has been out to survey the area multiple times, according to Braunlich. Although circumstances never quite lined up for various reasons (including construction in NYC and scheduling issues), the idea has remained on ESPN’s radar in search of an ideal weekend on the college-football schedule.

“Since there’s not a specific game attached, it’s a little bit different from the normal GameDay [format]. ESPN was looking for a weekend that was a little quieter in terms of a big matchup, so we could legitimately go to a neutral place to [host] GameDay.”

GameDay has set up shop at Military Island pedestrian plaza in the center of Times Square (on Seventh Ave. between 43rd and 44th Streets). The set features a north-facing backdrop highlighting the iconic Times Square landscape behind it. 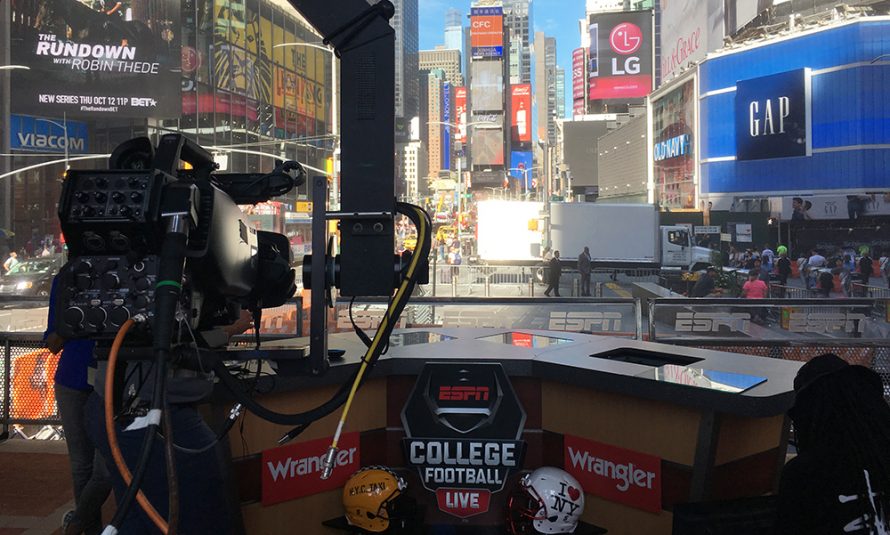 Given the hurdles Manhattan — not to mention Times Square — presents to a live production, ESPN has enlisted local company iDEKO Productions to help obtain the necessary permits and navigate the maze of regulations. “iDEKO has been extremely valuable and really understands how to go about doing things in this city for an event,” says Braunlich. “They are familiar with what permits have to be obtained and how to stay within the rules and guidelines.”

In an effort to avoid the high-foot-traffic periods, ESPN’s GameDay stage setup began at 1 a.m. today, with trucks unloaded by 6 a.m. and staging and infrastructure in place by 9 a.m. The set is delivering hits for various ESPN shows throughout the day today and will serve as the studio for College Football Live beginning at 5:30 p.m. The entire stage will be struck immediately after GameDay’s conclusion on Saturday.

ESPN Makes Itself at Home at GMA’s Times Square Studios
Originally, ESPN explored the notion of rolling out a mobile unit onsite at Times Square to serve as the production hub for GameDay. However, the most desirable location on 44th Street, where Good Morning America has deployed a mobile unit when necessary (on Election Night, for example), is currently under construction, making the prospect of parking an expand production truck next to impossible. 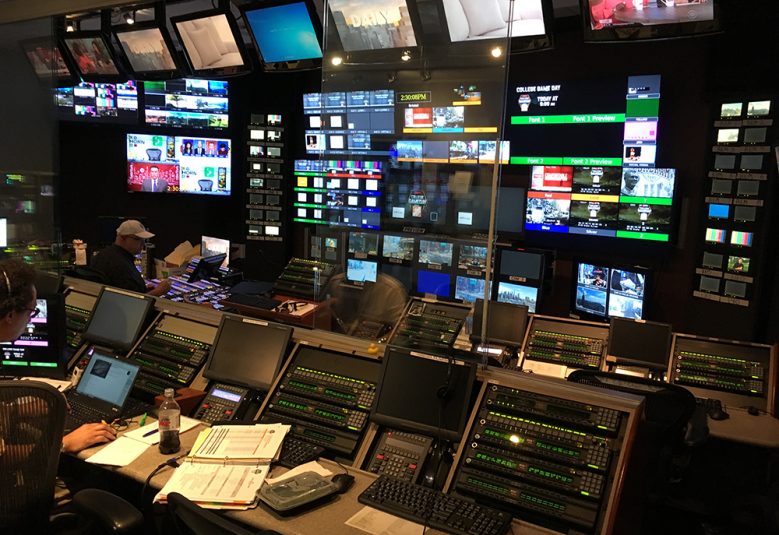 ESPN is using the GMA control room inside Times Square Studios for the GameDay production.

Instead, ESPN opted to use Disney sibling ABC News’ Good Morning America production facility inside Times Square Studios on the corner of 44th and Broadway. GMA’s primary control room is serving as home to the GameDay production team, and its cameras and RF audio equipment are providing the bulk of the complement for the GameDay studio set. In addition, ESPN worked with the GMA engineering team to add two EVS XT3 replay servers, a Vizrt graphics system, and a virtual-graphics system to the GMA Control Room B.

“Once we investigated the truck situation, it became immediately clear that the best way to go was to use ABC’s GMA Times Square Studios production facilities,” say Braunlich. “We had to supplement their [equipment] somewhat because they’re not set up to do our type of show, but, for the most part, this is a very beefy facility.”

“Everybody who has been involved in this [production] has been unbelievably cooperative and working hard to help us to make this happen,” Braunlich adds. “The Good Morning America team has helped us to solve problems and give us guidance since they have done so many shows out in the plaza over the years.”

In addition, ESPN can leverage the existing robust transmission paths between Times Square Studios and ESPN’s campus in Bristol, CT. 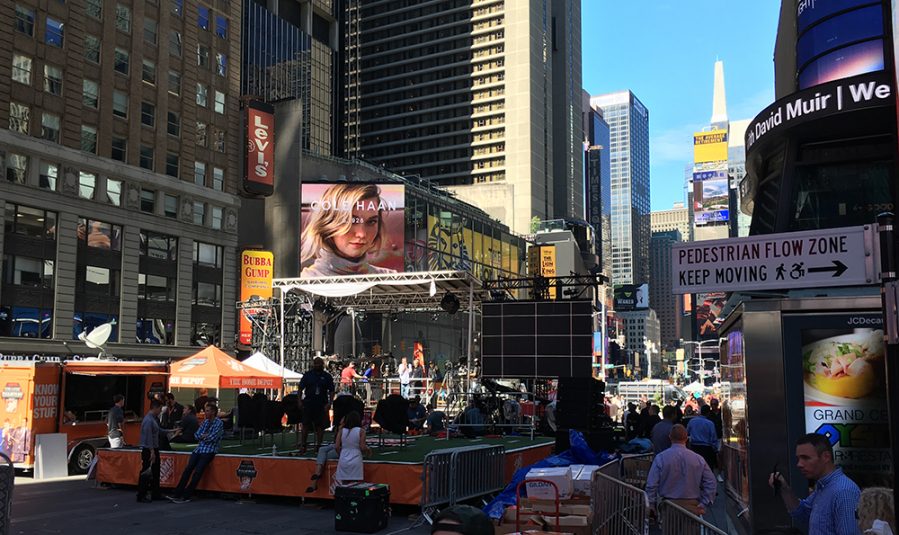 The GameDay stage is outfitted with its typical complement of two hard cameras, a handheld lock-off, and a jib. The accompanying demo field features another jib integrated with ESPN’s virtual-graphics system.

Braunlich and company have deployed an RF handheld camera and two RF Steadicams — one more than usual — to cover what is expected to be a massive and raucous crowd onsite in Times Square.

“We added a second Steadicam here since we’re pinched very tight on room,” says Braunlich. “Normally, on a GameDay show, we create wide aisles where the handheld and the Steadicam ops can navigate through the crowd to get shots. But the footprint is significantly smaller here, so we don’t want to take up additional space by making those aisles. We decided that a second Steadicam would be a good idea because we’re just not going to be as nimble and as flexible as we normally are to run around the crowd.” 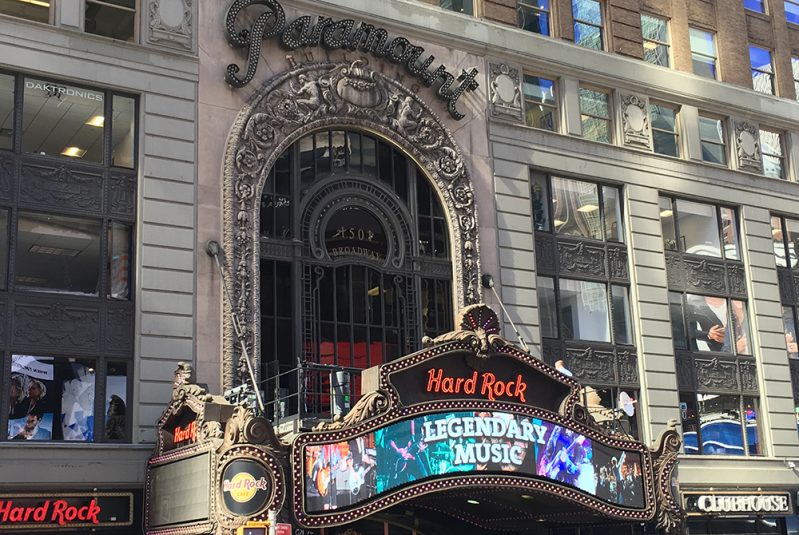 ESPN will erect a jib atop the Hard Rock Cafe marquee in place of its usual FlyCam.

The two-point aerial FlyCam system that has become standard on GameDay won’t be present because of permitting challenges and footprint constraints. Instead, based on advice and previous Time Square productions by GMA’s production team, ESPN will deploy a 24-ft. jib atop the marquee of the nearby Hard Rock Café.

“We’ve seen footage from what Good Morning America did in the same position, and it’s pretty dynamic,” says Braunlich. “You can do some nice, sweeping moves overlooking the plaza. It won’t be quite the same thing as the FlyCam, but it will give us a great look and show all of Times Square.”

ESPN is also leveraging permanent beauty cams from ABC’s flagship station, WABC, including a shot from across the Hudson River showing the NYC skyline and a shot of the Battery. Times Square Studio is also supplying a pair of its permanent robos in the plaza: one mounted to the wall of the building, the other on a pole part way up the plaza on 44th.

“There are four cameras added to the complement that are things we wouldn’t usually have but we are able to utilize here because of the [Disney assets] onsite,” says Braunlich. “There is a lot of synergy here within [Disney] with ESPN, Times Square Studios, ABC, and WABC, and everyone has been extremely helpful in helping us put on the best show possible.”