Echoing the Competition, NBC Coverage of Presidents Cup Is a Team Effort

RF plays a major role, capturing conversations on the course

The Presidents Cup this past weekend might not have provided the kind of on-the-course drama of recent Ryder Cups, but its location at the Liberty National Golf Club provided a dramatic backdrop: the Manhattan skyline and the Statue of Liberty. For the NBC Sports golf-operations team, the event posed the challenge of keeping up with a U.S. team that dominated the action for the first three days and then making sure the final-day coverage of the team’s victory march met the needs of golf fans.

Given the team nature of the event, emotions can run high. “When it’s a team event, everyone is pretty jacked up,” noted NBC Sports VP, Golf Operations, Ryan Soucy prior to the event. 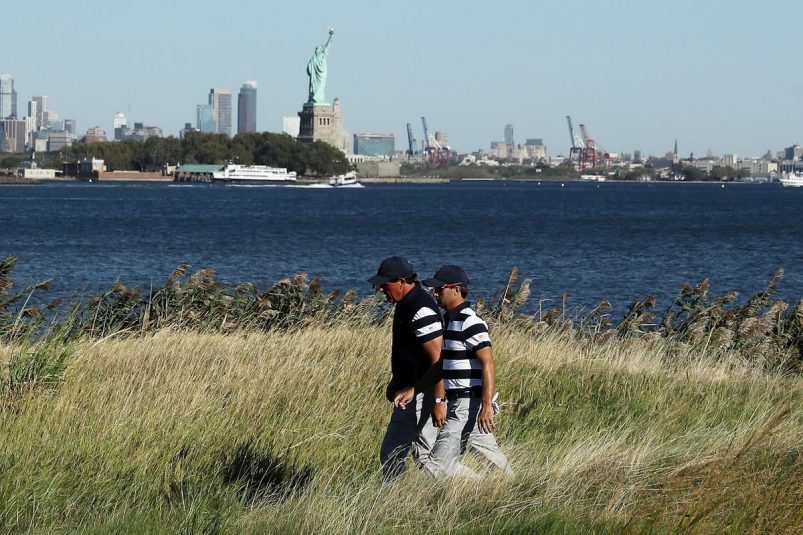 NBC’s coverage of The Presidents Cup this past weekend made great use of a dramatic backdrop featuring the Statue of Liberty.

The course is located on the New Jersey side of the Hudson and next to a military base, which provided the land for the TV compound.

“This is the first time we’ve been allowed access to a military base. They have an unbelievable operations team that we have been working with for about a year now,” said Soucy. “Most of our team travelled in on Monday from Tour Championship, turned our trucks around in two days. It’s been a great team effort.”

“Having one more day spreads it out a little bit more,” Soucy pointed out, adding, “We are here with Toptracer, which can be used to focus on one golfer and move with them to the next hole, and PinPoint for winds and fairways.”

NEP had a big presence with ND4 (A, B, and C units), SS25 (A and B units), and ST25 and Fiber 2 supporting live tournament coverage for NBC Sports. And NEP Atlantic supported the world-feed production by PGA TOUR Productions, ND5 supported Sky’s UK feed, and NCP14 was used by Golf Channel for production of its Live From the Presidents Cup coverage. More than 30 cameras were deployed, and NEP had 16 engineering and technical staffers onsite.

RF cameras also played a major role, because, with an event like the Presidents Cup, conversations between players are integral to the competition. Also deployed were RF Toptracer and an RF Steadicam used for introductions and elsewhere on the course. CP Communications was on hand, providing five RF mini cameras for NBC’s coverage.

Soucy, in his new role at NBC Sports, oversees operations for coverage on both NBC Sports and Golf Channel